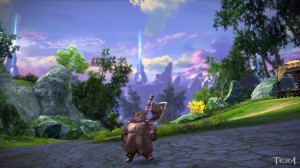 It’s not all bikinis and brassieres in Tera. Admittedly it is primarily bikinis and brassieres, but I thought I’d offer up a couple of screenshots of my main character as proof. At least you now know that there’s one character in Tera not wearing a bikini, and I think I saw one other male character wandering around at some point. Possibly. It was a little hard to tell because my view was blocked by a barricade of boobs.

First up, over to the right, we have one of my alts – Pusillus the popori. Who I think is really rather cute, as far as kittens with mohawks, warpaint and a battle axe go, at any rate..

Here’s my Aman Slayer, currently my main character, sporting a lovely straps and shoulders leather number, delightfully accessorised with an off-the-hip blue bath towel. Sassy! And yet practical too; washing the gore from hands and sword was never so easy. Introducing the all new Brigandine & Bath Robe armour from Kaiator International! Take two armour sets into the shower? Not me, I just slaughter and shower in one!. 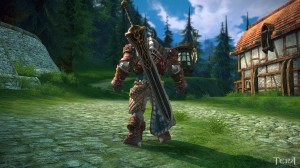 I have to say, as far as ‘not a lot of armour’ looks go, I really like the barbarian design they have for male characters in Tera. Despite my hand towel jests, the half-robe half-armour style is one which really tickles my fantasy fancy, much like my character’s plate’n’dress Templar armour in Dragon Age: Origins.

Later armour models for the Slayer include trousers and such, which will never do, but thankfully our old friend Ankia the Equipment Remodeller (with her equipment all hanging out) will let me keep the cosmetic look of my current armour set, should I so desire.

Speaking of cosmetic items, En Masse have recently had a community event where they posted a video to Facebook extolling the virtues of their action combat system, and at set levels of ‘shares’ of the video on Facebook they would post codes for cosmetic items in the game. The code grants one item, for use on one character only, which is a bit of shame if you’re an altoholic like me, but the cosmetics are nice: a pair of sassy spectacles, a pirate eye patch and a cat mask. The top level of Facebook ‘shares’ was reached in such a short space of time that En Masse released a special bonus level, set exceedingly high, which will unlock a pirate hat should the Tera community achieve the goal.

I think it’s well understood that community is what makes an MMO great, and it’s perhaps not surprising that we’re seeing MMO publishers looking to those established online communities, such as Facebook, in order to promote their game to as wide an audience as possible, through a series of incentives designed to appeal to their core fan base. It seems like a natural strategy to me, although there is perhaps an inherent danger in encouraging your more rabid fans into spamming others with promotional material for your game; the Tera community blitzed the early levels of the En Masse event, such that the initial three cosmetic items were unlocked before I was even aware that the event existed.

On the topic of community events, Tera’s first run of its political system is well under way. There are three regions to vote for, and multiple players running for Vanarch in each. In the screenshot you can see the current exit poll status for Northern Shara, and my vote marked against the Fairy Tail candidate (I think I can reveal my vote without spoiling the ballot), who was in second place as of last night when I took a grab of the screen. As long as your character is level twenty, an icon appears below the mini-map which opens a window showing you the candidates for each region; a little party political broadcast piece, written by the candidate, explaining what their policies will be; and a button allowing you to cast your vote. Not surprisingly, nearly every candidate is offering low taxes (Vanarchs can set taxes on NPC shops in their region), as well as additional amenities in the towns.

A player can vote once for each region, and receives a useful health potion in the post as a reward for each vote, so there’s a minor incentive to vote, perhaps aimed at those players who aren’t simply intrigued by such a system; certainly a political sub-game to the main MMO grind has the potential to qualify for a Hemlockian Nifty![TM] award, so we’ll have to see how it plays out, and, importantly, whether it has any real impact on the game. I’m quite excited for it, playing as I am on an RP server, because it has the potential to support a complex political dynamic within the RP community, directly within the game’s system.

And finally, just because he’s such a handsome fellow, a screenshot of my current mount. Press the spacebar when stationary and he lets out the most almighty thundering roar, such that I keep expecting to see his lungs come flying out of his mouth, as if from a cannon. There are a fair few design traits which detract from Tera, but by golly there’s a fair bit to like too.

2 thoughts on “Variety’s the very spice of life, that gives it all its flavour.”