As well as upgrading components of your aircraft, your crews gain experience during combat that can be used to upgrade skills. The second button over a plane, the pilot’s head icon, opens the crew window with four tabs: Pilot, Gunners, Ground Service and Qualification. There’s a nice guide to skills on the War Thunder site that explains what each skill does. 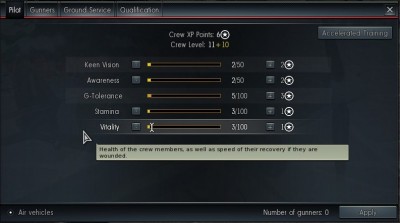 Pilot skills apply to all aircraft, Gunner skills are only useful if an aircraft has turret gunners; if you’re not sure, check the “Number of gunners” shown on the bottom of the crew skills window. The first gunner skill, “Number of experienced gunners”, is important as each crew starts with a single skilled gunner, and if there is more than one turret position on an aircraft (quite likely on medium and heavy bombers) then the effect of skill points spent in the other areas is dramatically reduced if the number of experienced gunners skill does not equal or exceed the number of gunners. Additional skilled gunners are expensive for low rank planes at 240 crew XP; you can use the “Accelerated Training” option to purchase crew XP for golden lions, otherwise it’s a lot of saving up.

The third tab, Ground Service, allows you to speed up repair and rearming times; Reload Speed is especially useful in Arcade mode where you don’t even have to land to reload, and reduces the time required to reload both guns and secondary weapons (bombs/rockets), the Wiki link above has a table showing the effect. Repair Speed and Repair Rank affect aircraft repair, oddly enough, more details in the next section.

The final tab, Qualifications, are specialisations that can be purchased (silver lions for the first specialisation, gold eagles for the second) for each aircraft once your crew reaches a certain level, and offer a hefty boost to a number of other skills. It’ll take a while for a crew to become experienced enough to qualify for these, it’s worth waiting until you have a good idea of which planes you’ll want to keep flying before buying them.

Don’t worry too much about where you spend early skill points, you can’t go far wrong upgrading skills that cost one or two points. Also remember that crews retain their skills when changing aircraft, so if you’ve invested in gunner skills, especially skilled gunners, it makes sense to keep that crew in an aircraft with turrets.

Although your great skill and masterful tactical aptitude will surely ensure you emerge from most battles unscathed, every now and again, through pure bad luck or unsporting enemy behaviour, you might get shot down. Or rammed by an enemy aircraft. Or rammed by a friendly aircraft. Or you might misjudge a strafing run and prune a few treetops with your wings (note: your aircraft warranty doesn’t cover using the plane for horticultural purposes). Or your graceful landing attempt to capture an enemy airfield may result in an interaction with the ground at a somewhat higher velocity than would be ideal. On reflection, it’s incredibly unusual to come through a battle unscathed, so you’ll need to repair your aircraft. Each aircraft gets 10 free repairs, so you don’t have to worry about repairs right away, after that it will cost silver lions to fix up all the damage.

By default aircraft are automatically repaired after a battle, but to save a bit of money you can un-check the box with the spanner icon at the bottom of the screen next to the “Research” button, “Automatic repair of all vehicles after battle”:

If you don’t automatically repair then your aircraft will gradually be repaired for free over time. The speed of repair depends on the aircraft in question, and the crew repair skills; the crew’s “Repair Rank” skill must be equal or higher than the rank of the aircraft for the “Repair Speed” skill to apply, then the higher the repair speed, the faster the repairs.

You can see how many free repairs (if any) are remaining, time to repair for free, and average repair cost in the stat card of a plane when you hover the mouse over it. Low rank planes repair quickly, and don’t cost much if you want to instantly get back into the fight, both cost and time increase quite sharply in the high ranks.

I tend to turn off automatic repairs, and switch between two or three different nations while waiting for aircraft to repair. You can always manually repair an aircraft (a spanner icon appears on its bar if damaged) if you’re in more of a hurry, even if not fully repaired you can knock a bit off the cost by waiting.

You can also turn off automatic ammunition resupply (the icon next to automatic repairs), but as you can’t create ammunition out of nothing over time there isn’t really much benefit in it.