I’m suffering from a bout of that irrepressible excitement one often feels with regards to creating a new character; this time however, it’s for Dragon Age: Origins and not another of my innumerable MMO alts. It’s something I haven’t felt in an MMO for quite some time and which I dearly miss, but I think that’s more likely down to my general quietus with respect to MMO hype at the moment, than anything that MMO developers are doing specifically wrong.

To clarify: it’s that feeling you get deep down when you are inspired with a character concept and want very badly to plan out that new character and, more desperately, to see how your new concept pans out within the game. It’s that frenzy of creation that gets your text editor all hot and sweaty, and where Imagination, Anticipation and Expectation throw caution to the wind, discard their clothing and have a frolicking good roll around together between the spreadsheets.

City of Heroes used to drive me to distraction like this when I was playing it; the sheer number of archetype, powerset and costume combinations meant that I could latch on to the smallest thing, be it a single costume item, a combination of a couple of powers, or something else, and build an entire concept around them. Then out would come the spreadsheet and the lists of powers and levels and slots and enhancements, and a build would be meticulously planned. What was worse, as that character was being built, another powerset combination would leap out at me and I’d put the current character plan on hold whilst I built up that concept in my mind; each new idea was like the innocent trickle of snow that is in fact the prelude to an avalanche, a small idea popping unceremoniously into your mind, and before you know it you are buried alive beneath a metres-thick carpet of densely compacted thoughts on costumes and names and builds and all of the overwhelming potentialities.

World of Warcraft did a similar thing but on a smaller scale, with every class appearing deeply appealing, as though they were all attuned to some fundamental primordial genetic trait that is inherent to MMO adherents. Talent specialisations initially served to expand the horizon to the good ship Customisation, offering tantalising hints at new lands that players might discover with their characters, but alas in this case the world turned out to be flat, and players who did not follow the tried and tested paths were doomed to fall off the edge of the world and be lost to the game forevermore.

Many other MMOs have offered the same: EQ2 almost drove me insane with the options and potential for my character. Maybe it did. I wouldn’t be entirely confident in denying the fact that I’m actually still sitting on the floor of my room, rocking back and forth while surrounded by a cityscape of sheets of paper, some crumpled into balls, others folded into obscure shapes, all of them covered in tiny blocks of illegible scrawl and connected by crisscrossing lines and arrows which, unknowable to anyone but me, attempts to plot my perfect character in the world of Norrath. I also expect that other MMOs would provide similar excitement if the game itself appealed to me, Fallen Earth’s expansive skill trees sound like a potential Petri dish of breeding material for the rapidly multiplying bacterial disease that is my desire to build new and interesting characters, for example.

I’m glad that I have, for now, found the bug again through my enjoyment of Dragon Age. I’ve just recently completed the game on its easiest setting whilst skipping many of the side quests, just in order to get to the end and experience the core of the game, something I am notoriously bad at achieving; I am not a game finisher, in the main. However, having finished and got an ending that was pretty much all that I had hoped it to be, I am left wanting more. Thankfully there is plenty more to be had: I have many side quests to complete, party character personal quests, and other such content to explore. I can also try the game now on a harder difficulty, knowing that it won’t put me off entirely if I have to replay a fight a few times and attempt to be more tactical about things rather than just charging blithely in and hoping that it will turn out for the best.

And of course I get to create a new character. I played a Warrior the first time around, a feisty noble lady who become a Templar and a Champion and swung a huge two-handed sword at her foes. Now I’m tempted by an Arcane Warrior, a mage who can get into the thick of melee and mix it up with the best of them. So there are spells to consider now where my Warrior had none, and which armour would be best, and what weapon. I won’t be able to wear my beloved Templar Armour this time around – the most gorgeous looking heavy armour outfit I think I’ve ever seen – both because it’s restricted to Templars only, and also because it is not the best armour in the game; I could afford to wear what looked best when playing the game on the easier setting, but the rules of the Maxminati come in to effect at greater difficulty levels, and so style has to be eschewed for stats, as is regrettably the way in so many RPGs, MMO or otherwise.

So here’s to you, Velkyria, Grey Warden and champion of the people of Ferelden. Enjoy your retirement travels with your dear Leliana, and I will see you again with the coming of the next DLC and Dragon Age 2. 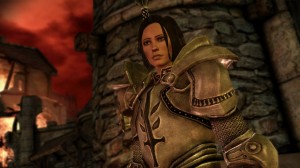 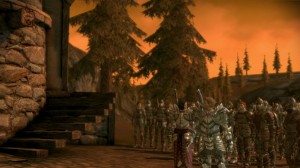 Until then, I have a spreadsheet and a few text editor windows burning a hole on my desktop.

2 thoughts on “Every act of creation is first of all an act of destruction.”