If you’re a keen history buff you’re probably familiar with many of the planes in War Thunder, the vast majority were produced and used in quantity in World War II; there are also a few more unusual variants dotted around, and a couple that only reached prototype stage to keep things interesting. War Thunder doesn’t quite aim for the down-to-the-last-rivet level of realism of a really hardcore simulator and some of the battle scenarios are slightly implausible for the sake of gameplay, but a lot of work does go into the accuracy of the models and the way they behave, so real-life knowledge of planes, roles and tactics should broadly transfer into the game. If you’re not an aviation geek, here’s a quick overview of aircraft types.

Fighters, as the name suggests, are designed to fight other aircraft. Most War Thunder fighters are single-engine single-seat planes, including many of the iconic aircraft of WWII such as the Spitfire, P-51 Mustang and A6M Zero. Early rank fighters mostly have a light machine gun based armament that isn’t ideal for bringing down large bombers (though lucky/accurate shots can take out pilots or key components, or enough bullets will get anything in the end); later models with cannon or larger batteries of heavy machine guns have a much greater weight of fire. 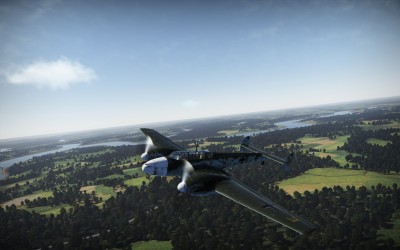 The job of a bomber is to drop bombs; the clue is in the name, really. Medium and Heavy Bombers such as the Heinkel He 111, Lancaster and B-17 Flying Fortress are designed to drop bombs in level flight from medium-to-high altitude using the bombsight. There is a bombing tutorial, but if you skipped it the general technique for level bombing is to get a bit of altitude, line up a ground target, switch to the bombsight (F7):

And when the target is in the sight, hit the space bar. In Arcade mode, as well as the bombsight you have a nice, big crosshair on the ground that shows where your bombs will land, if you prefer you can use that for aiming in the third person (third aeroplane?) view; after locking on to a ground target (middle mouse button by default) then you can centre the camera on that target (right mouse button by default) to keep it in focus while lining up a bombing run. The crosshair should be solid in level flight, as you climb and dive it opens up, representing bomb dispersion, you really want the crosshair completely solid for optimal accuracy.

Medium and Heavy Bombers are big, slow, lumbering targets. They have multiple gun turrets for defence, which can be quite effective with trained gunners, or if you man the rear guns yourself by pressing F6, but as fighter armament gets heavier it’s not often a duel you can win. If you want a friendly fighter escort you’ll probably need to bring a squad-mate, team co-ordination is something of a rarity in Arcade matches, so one way of trying to stay safe is to climb as high as you can, especially in the early ranks when less powerful engines mean it takes a long time for enemy fighters to gain altitude; if the enemy team are all distracted in low level engagements you can drop your bombs and potter around in safety waiting for them to reload, although if any enemy fighters also climb to high altitude at the start of the match you’re just postponing the inevitable. High altitude bombing works best against static targets such as strategic targets on Ground Strike maps, unless you can calculate how far a tank will move in the time it takes the bomb to fall and lead the target appropriately. 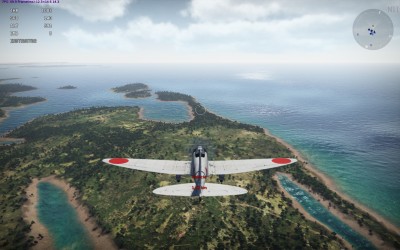 Dive bombers can place their bombs accurately, so are well suited to attacking moving vehicles or ships, though you’ll still need to make some allowances for the motion of the target. Delivering ordnance from low level does make them vulnerable, though; I like to gain a decent amount of altitude and fly slightly past a target (as long as there aren’t any prowling fighters), so after the attacking dive you can use the speed you built up to continue back towards your home airfield and (hopefully) comparative safety as fast as possible, rather than bleeding that speed in a turn.

Torpedo Bombers like the TBF Avenger, Swordfish and B5N Kate are bombers that carry… anybody? Award yourself five points if you said “a torpedo”. Though if being really pedantic, you could argue that a torpedo isn’t a bomb, so they should be called “Torpedoers”, but that sounds silly. Anyway, once again there’s a tutorial that covers torpedo attacks if you’d like to practise, it’s pretty easy; you get a nice big line showing where the torpedo will go that turns green when a target is lined up (if it’s not on screen look in the bottom right hand corner and it should explain why, usually either “Too High” or “Wrong Angle”. Alternatively you might not be carrying a torpedo, in which case you’re in quite the wrong section of the guide.) When you’re about half a kilometre away from your target, press space to drop the torpedo. 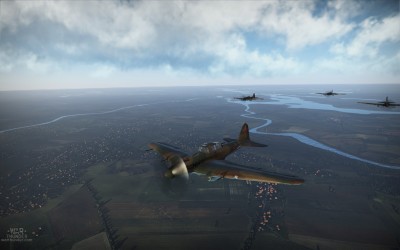 Attackers are ground attack aircraft that operate at low altitude, armed with cannons, rockets and/or bombs. Few aircraft were designed specifically for ground attack, the Il-2 Sturmovik being the definitive example; other Attackers in War Thunder include the German Hs 129 and American A-20 Havoc. General technique is to point yourself at a hapless tank/pillbox/artillery emplacement, shoot it with rockets or cannons, then pull up before you smash into its charred ruin; that last bit is particularly important. For dropping bombs they tend to be most accurate in a dive, keep an eye on the crosshairs in the bombing reticle. With their powerful guns Attackers can often be pressed into service in a Heavy Fighter role if there are no ground targets around; they don’t tend to come off too well against dedicated fighters, but anti-tank guns can really make a mess out of bombers.

Light Bombers are something of a mixed bag; some early war Light Bombers like the Blenheim operate in a similar way to their Medium and Heavy brethren, dropping bombs from altitude in level flight (just with a much smaller load), others like the Soviet Su-2 are more similar to Attackers, better suited to low level strikes. As the war progressed and engines became more powerful, dedicated Light Bombers generally became obsolete as Fighters could carry similar loads; the Rank III Typhoon fighter/bomber can carry twice the payload of the Blenheim. 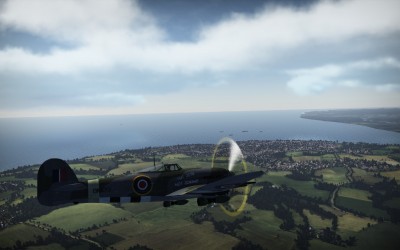 Many aircraft can fulfil multiple roles, depending on weapon load; the Beaufighter Mk X, for example, is classified as a Heavy Fighter / Torpedo Bomber, but can also be fitted with rockets instead of a torpedo for more of an Attacker role. Most Torpedo Bombers can also carry conventional bombs, so they’re not completely useless on maps with no naval targets. The Soviet Ar-2 Dive Bomber / Medium Bomber can deliver its bombs either from level flight using the bombsight or in a dive. Perhaps most common, though, are Fighter-Bombers such as the Typhoon, P-47 Thunderbolt and the F-variant of the Fw 190.

Fighter-Bombers can attack ground targets like Attackers, at low altitude with rockets, bombs and/or cannon, dropping bombs from a dive, but are more capable in air-to-air fights. Hanging bombs from an aircraft will affect performance, though, so if air superiority is a priority (as it is in most Realistic Battles, or a Domination match after the ground targets have been destroyed) then just stick to guns. If you’re in a Ground Strike Arcade battle you might as well fit a bomb or two if you have the option, you can always just drop them if you find yourself in a frantic air fight (just be a bit careful you’re not over friendly ground forces at the time).