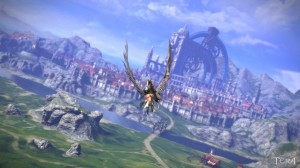 Having reached level twelve and finished the quests on the introductory Island of Dawn, I took the Pegasus flight to the major city of Velika. Situated in Southern Arun, this is the seat of the Valkyon Federation, a coalition of all the civilised races of the land against the invading Argons. The flight into the city was stunning, as my mount ‘rung upon the rein of a wimpling wing In his ecstasy! then off, off forth on swing, As a skate’s heel sweeps smooth on a bow-bend’, wending its way around the blanket of countryside rolled-up around the city’s waist, I could only marvel at the exquisiteness of the environs. There’s no doubt that these worlds which we inhabit have developed, in graphical terms, to the point where it seems as though one could reach through that lambent mirror sat upon the desk, and grasp the infinite pixels of possibility which it reflects. 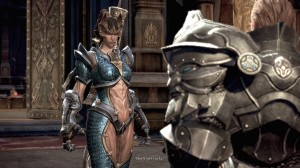 After exploring the city for a while, and claiming my mount (which is granted at level eleven and instant cast – huzzah!), I went to the main hall to speak to the commanders of the war effort there, whereupon after a brief “well done” from the leader, I was palmed off onto a rather brusque and patronising fellow who pointed his sword threateningly at me, and told me not to get cocky after my initial success on the Island of Dawn. I could only look at him in wondrous disbelief, before pointing at my outfit, raising an eyebrow, and querying just whereabouts he imagined I’d be hiding any cockiness. He was lucky he didn’t get an extending lance right in his. 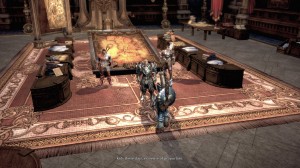 Of course that wasn’t terribly likely to cause him any trouble, because all the men in TERA are pusillanimous braggarts, encased in armour so thick that they reach for a can opener every time they need to pee. Wrapped in their comforting cloak of cowardice, they had the audacity to stand there and tell me that I had no sense of proportion. I told them that my sense of proportion was just fine, and that I had ample evidence of such every time I had to look at myself in a mirror.

I still reckon I could take ’em in a fight. 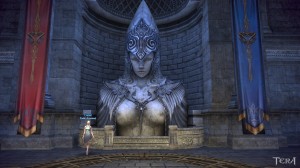 Having left the Keg Brothers to pat each other on their well-armoured backs, I ventured around the city once more. When a world is as beautiful as this, it draws you into the environments and encourages you to observe your surroundings. For example: I met this lovely lady, Ciebel, a priestess, and I couldn’t help but stop to praise her on her choice of outfit. “Finally” I thought, “a place without overt sexualisation of women! Here is this fine young priestess, in a slender yet chaste dress, who clearly has rejected the more lascivious outfits of the warrior caste.” I wandered away in quiet satisfaction, exultant in finding this small sanctuary in the city, where an innocent priestess stands removed from the incessant sexuality prevalent elsewhere in the realm! 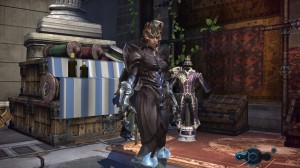 But wait, elation! Joy of joys! In my wanderings I stumbled upon the cosmetic armour vendor. TERA has many cosmetic armour slots, and here I had discovered the Equipment Remodeller, who could offer cosmetic armour items! For a considerable sum of gold, of course. A considerable sum, but one which will be worth every scraped-together-coin, for I had found a set of sensible armour for myself. I could go back to the Keg Brothers and point my lance at them, and say “Hah! Observe how I am appropriately attired for battle and weep, for I could beat you all when I wore but a piece of thin copper wire as a thong, and so now… now I shall be as to a goddess walking amongst mortals!”

So, thank you Equipment Remodeller, thank you from deep within my heavily armoured breast. You are a shining beacon in a world of depravity, and I praise the gods for your presence. In this land where women are forced to wear degrading outfits, you are here with your sense of decorum, your sense of reserve and your sense of dignity. You have fashioned outfits which are tasteful, sensible, and practical. You stand as an example to all, and I would hold you up to all the world as the way that things should really be. Come. Come Equipment Remodeller, come here and let me hold you up, literally upon my shoulder, and I will raise you toward the heavens and rent the air with a cry of exaltation. Come here and… ah. Oh dear. Oh dear me.