Aeroplanes, invented by Ian Aeroplane in 1903, really caught on with the military in World War I, initially for reconnaissance, then for bombing and ground attack. One area in which they didn’t fare well was trench warfare, where manhandling bulky aircraft “over the top” then pushing them through no man’s land towards enemy trenches proved rather ineffective, so in 1916 Ian Tank had the idea of taking an aeroplane, removing the wings and propeller, and adding armour plating and caterpillar tracks to create the vehicle that bore his name: the Armoured Fighting Ian. The British government wished to hide the true nature of these new vehicles, though, so created a cover story that hundreds of sweater vests were being sent to the troops, with shipping crates stencilled appropriately, and the nickname stuck.

At the time of writing tanks had only just been introduced to War Thunder and were only available for Germany, the Soviet Union and the USA. I’m not much of a tank player myself, so this is a very cursory introduction to ground forces; research, upgrades, the economy etc. are common between air and ground forces, those aspects of the main guide should still hold true, but for the finer points of tank combat you’ll need to head elsewhere. Issue 2 of the War Thunder Community Magazine has an introductory guide, and “The Academy” section of the official War Thunder forum has plenty of threads.

First thing’s first, at the top of the screen click over the “To Battle” button to bring up the mode selection window, and select Tank Battles, then click “Army” in the bottom left corner of the screen to switch from planes to tanks.

You should have a tank tutorial option in the top right of the screen: 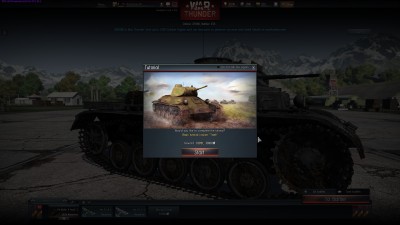 This helpfully covers the essentials of tank combat (drive around, point gun at red things, shoot), with an emphasis on finding vulnerable spots when targeting enemy tanks for maximum damage. As with the plane tutorials it’s short and to the point, worth doing even if you’re supremely confident in your tank commanding abilities for the 100 Gold Eagle reward at the end of it. 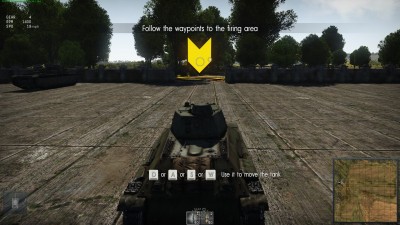 Once you’ve completed the tutorial you should be back on the main screen with your tank ready to go. Depending on whether you’re playing Arcade or Realistic Battles, you might need to adjust the other crew slots; Realistic Battles allow you to use both tanks and aircraft, and matchmaking depends on the highest Battle Rating of any sort of vehicle, so don’t start a battle with your little reserve tank and a few jet fighters; either slot in some reserve biplanes to keep everyone at the same level, or use the “Send on holiday” option to give the crew a bit of a rest until you’ve researched some slightly more advanced vehicles.  Click the “To Battle” button to get into a match!

The basic mechanics of tank battles are similar to air battles. After a (hopefully brief) queue you’ll see an overview map for the forthcoming battle, and you can select the vehicle you’d like to fight with (not a difficult decision when you only have starter tanks). You can adjust the ammunition load-out if desired, though again that’s not an issue in a stock tank, our Reserve Panzer IIC has only Default shells to start with. After agonising over those choices for tens of picoseconds hit the “To Battle” button in the bottom right to start fighting. 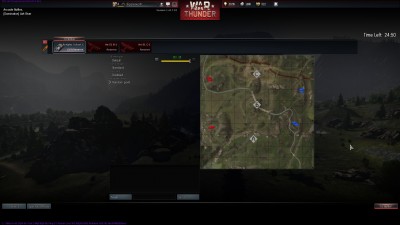 Tank maps are mostly Domination/Conquest maps, with one or three points to capture (three in this case, labelled A, B and C). Head for one of those, sit inside it until it turns blue to take control of the point for your team, and home for tea and medals. Simple, eh? At least it would be if not for all the cads and rotters on the other side who keep shooting at you with guns and stuff, very unsporting. 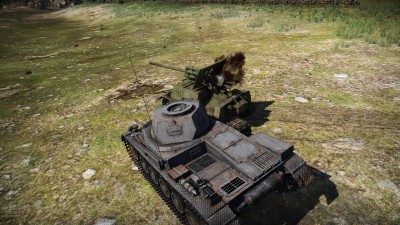 Tanks, to paraphrase Thomas Hobbes, suffer from “continual fear, and danger of violent death; the life of a tank is solitary, poor, nasty, brutish, and short”. The thin armour of your reserve tank doesn’t offer much protection, and enemy fire can wreak all sorts of havoc from instant destruction (quite spectacularly, if your ammunition explodes) to leaving you unable to move or fire if vital equipment or crew are hit. You may find your own tanks being destroyed by a single hit whereas enemy tanks seem to shrug off your shots; learning the weak points and vulnerable components of tanks is important for success.

If an opponent is well positioned and camouflaged you might not even know where the fatal shot came from, so tanks can be quite frustrating when starting out, but at least you have a few respawns so you can try a few different things like opening the throttle right up and heading for an objective at full speed, cautiously working around the edge of the map in a flanking manoeuvre, or hanging back in a sniping position. 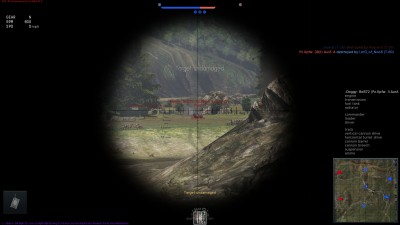 In Arcade ground forces mode, once you make enough kills you can spawn an aircraft for a very limited time. Three icons at the bottom of the screen, next to ammunition options, represent a fighter, attacker and bomber, by default assigned to keys ‘7’, ‘8’ and ‘9’, progressively unlocked with more kills. Once you qualify for an attacker or bomber, press ‘8’ or ‘9’ to start the spawn process; a 15 second countdown starts, at the end of which you’ll find yourself in the air (your tank remains wherever it was, so try and make sure you’re in cover before spawning a plane; also, if you get killed in the 15 second countdown, the spawn is cancelled). The aircraft you get doesn’t depend on what you have unlocked, it’s automatically assigned. A timer at the bottom of the screen shows how long you have left, usually just about enough time to dive towards the battle and make one rocket/bomb attack; at the end of the timer (or when you crash or get shot down), you return to your tank.

When one player starts to spawn an aircraft, everyone in the battle receives a message; at this point, anyone with enough kills can spawn a fighter to either attack or defend that player.

In Realistic mode, a Spawn Point system is used. You start with a certain number of spawn points, and each vehicle in your garage has a cost to spawn (depending on its Battle Rating). You earn more spawn points as you fight.

After the battle, the fundamentals of ground forces (component upgrades, researching new vehicles, crew skills, customisation etc.) work the same way as aircraft (only tank-ier, crew skills are assigned to the driver, commander etc. rather than pilot and gunners), see the relevant sections of the main guide for more details. It’s worth researching the “Parts” modification first for your tanks: once you’ve bought them then some damage can be repaired (you’ll get a message in the match, “Press ‘Y’ to start repairing”, if it’s possible), and fire extinguishers are also very useful (they’re activated by ‘6’ by default). Most tanks can research some exotic ammunition variants like Armour Piercing Capped Ballistic Cap (APCBC), Armour Piercing Composite Rigid (APCR), High Explosive Anti Tank (HEAT) and Non-armour-piercing Extruded Rigid Foam (NERF) (see Issue 5 of the War Thunder Community Magazine for an in-depth run-down of the different shell types), and various performance-tweaking improvements to engines, breaks, turret mechanisms etc.

You gain research points from each battle towards unlocking a new vehicle (select which one you’re aiming for by clicking the “Research” button on the main menu while “Tank Battles” is selected in the bottom right corner); once researched you can buy the new tank with Silver Lions, and put it into service in another crew slot.

If you frequently switch between playing aircraft and tanks for the same country, then the “Preset” options allow you to rapidly change your garage line-up.:

Simply add a new Preset, rename it (if you can be bothered), and you can change your whole garage with a couple of clicks.