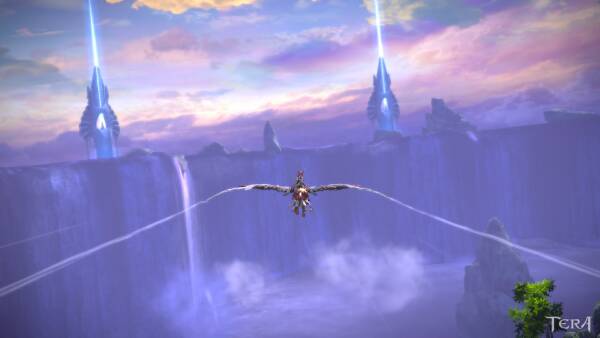 Oh! I have slipped the surly bonds of Earth
And danced the skies on laughter-silvered wings;
Sunward I’ve climbed, and joined the tumbling mirth
of sun-split clouds, — and done a hundred things
You have not dreamed of — wheeled and soared and swung
High in the sunlit silence. Hov’ring there,
I’ve chased the shouting wind along, and flung
My eager craft through footless halls of air….

As it was when I wrote about my enjoyment of the small detail of a turning horse’s head in Lord of the Rings Online, there are elements to Tera which are just breathtaking. Contrails form from your mount’s wingtips as you fly between locations; I haven’t worked out if they’re random or based upon the environment being passed through, but it is a simple moment of delight when they appear.

I’ve deleted the two thousand or so words which I wrote next, because many people have already judged the game and those who play it, and I cannot bring myself to present a justification for my playing it to the MMO equivalent of Freud’s inner circle.

Suffice it to say that I feel this is a game which tried not to bridge the chasmal divide between Eastern and Western cultures, but launched itself wholly across in an attempt to forge a beachhead, and found itself firmly repelled.

My time with Tera will shortly be drawing to a close, but I don’t regret having played it, for I have had joyous encounters on my journeys within both the world and the game, where I discovered a different culture of design, all of which I happily feel has been a worthwhile expansion to the universality of my MMO experience.