There’s masses of literature already devoted to air combat, both real life and simulated so I won’t spend too much time on Thach Weaves, Immelman Turns, boom and zoom, turn n’ burn, salt n’ shake, Chaka Demus n’ Pliers and the like. War Thunder aims for a degree of realism, albeit very broadly in Arcade matches, so tips and tactics from real life tend to work in the game. Billy Bishop offers some good advice from his flying school, for example, or perhaps slightly more usefully most of Boelcke’s rules from 1916 translate quite well into the game: 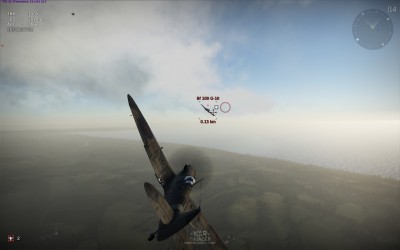 Assailing a Bf 109 from behind

Do not look directly at the sun

For more detail there are sections on the official and unofficial wikis with useful articles, there’s plenty on YouTube from people like Bis18marck70 and GrmlZ; if you have a specific questions you can try the Official Forums or the War Thunder subreddit.

One thing fairly specific to Arcade mode in War Thunder is mid-air ammunition resupply; if you fire all your ammunition, there’s a nasty ‘click’, and you’ll see a counter in the top left hand corner showing how long you have before the guns reload. This starts off at about 20 seconds for machine guns, but can be reduced by training the crew. Obviously this is slightly inconvenient if you’re in the middle of a fight, so if you think you’re running low on ammunition and you have a bit of breathing space you can head away from threats and manually reload (press ‘Y’ by default). Machine guns generally have a reasonable amount of ammunition, reloading is more important for some cannon-armed fighters as large calibre weapons (20mm and above) have less ammunition to start with (the Spitfire IIb has only 60 rounds for each cannon), and reloading cannons takes twice as long as machine guns.

Watch out for overheating guns as well. As you fire, a red circle fills around your gunsight; this represents your guns heating up. The longer you fire the greater the chance of a jam, so firing in short bursts is generally a better idea than holding the trigger down, unless you really need to bring something down in a hurry, like an aircraft about to land on your airfield in Domination.

Speaking of really needing to bring an aircraft down, there is a last resort: ramming. Rather a divisive subject, often a cause outbursts of anger in the chat window; deliberate ramming should very much be a last resort, as nobody gets credit for a kill if a plane is destroyed in a collision (you can really annoy somebody on your own side if they critically damage an enemy, then you come along and ram it before it actually crashes), but if your guns are reloading and really need to stop an opponent you don’t have many options. A lot of ‘ramming’ incidents happen during head-on attacks, and if you’re playing a game of chicken then you’re at least as much to blame as the other person if you do crash. If you really like your plane you should take early evasive action in such a situation; if I’m in a shiny new high rank fighter I’ll break off and circle around for another shot rather, if I’m in something of a lower rank that’s suffered some damage, heck, I’ll keep the fire button held down, and if the other guy doesn’t turn that’s his problem… There’s always a risk of accidental collisions and friendly fire too, especially if there are three or four people chasing the same opponent; these things happen, it’s best not to get too worked up about it, but do be careful, even if just to avoid the cash and XP penalty from downing a friendly.