Much has been written of Age of Conan, Funcom’s new MMORPG, but for the avid Hatter, one question remains unanswered: why did Rudolf Hess fly to Scotland in May 1941? Hat News Now Today has no idea. But we have sent our correspondents to Tortage, the starting area of Age of Conan, to see what sort of hats are on offer. 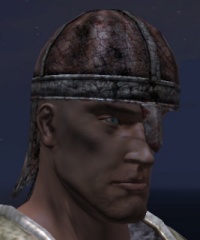 The most prevalent headgear is the sturdy padded leather helm, favoured by melee combatants.

Then there’s the helm that’s leather, and padded. Iron nose pieces are in this year.

For those wanting something lighter, there’s the leather helm with ever so slightly less padding.

Yes, as far as helms go, the key words this season are “leather” and “padded”. The iron nose piece is ubiquitous, the major stylistic war rages over Flappy Bit Hanging Over The Neck: Yes or No? (Your correspondent apologises to eagle-eyed viewers who might’ve noticed all the illustrated hats are actually the same, but he couldn’t be bothered to catalogue the minimal differences. Also Tortage is a bit dark, and flash photography won’t be invented for a few millenia, so the pictures are a bit murky).

Still, all is not lost for the hat aficionado. Hat News Now Today would suggest that those seeking more exciting millinery opt for a more mystical light or cloth armour wearing class, which opens up options such as the hood:

Perfect for reapers (of the grim variety), monks, mysterious strangers, and petty criminals trying to avoiding having their face shown in Closed Circuit Artist’s Etchings.

The really exciting hat developments come from the Picts, though:

And finally, the perfect headgear for anyone who’s ever wanted to hide behind a wall, then pop up shouting “argh, I’m being eaten by a giant snake!”

So there we have it. Today’s Hat News, Now from Tortage is mostly padded and leather, but don’t forget to head out to White Sands to see what those crazy Picts are up to. Next time out we’ll be off to Stygia, to see if anyone has had the bright idea of making stuff out of metal yet. B-bye!

[1] I would have added a sound file to this post of dramatic current affairs theme music, a la Panorama (or more probably The Day Today), but I’m afraid I couldn’t be bothered so you’ll just have to hum it yourself. Still, it would’ve been a dead giveaway if you were trying to read this at work or somewhere, so probably for the best. Unless you just hummed it, which would also have been a dead giveaway… Quick! Tell your boss you were reading important company announcements, and adding theme music gives them greater impact. You never know, you might start a trend.