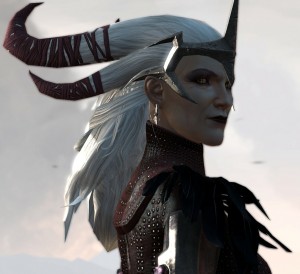 For our maiden voyage into all things hair styled, we present Dragon Age 2’s coiffure queen: Flemeth; an entity who probably isn’t actually a maiden, might not even by human, and will probably annihilate us for objectifying her. But for an old bird she’s a bit of a fox; a foxbird perhaps then, or a birdfox. Either way, she’s rather hot, and we’re not just talking about the fire and flame leaking from her nostrils.

Our Flemeth has clearly grabbed some sponsorship from one or more hair care companies since we last met her! Marvelling first at the sudden improvement in glossy shine and flowing tresses in stark comparison to her former self 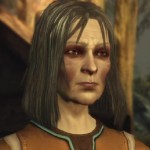 – Andraste knows how long it takes to wash all that, and how many bottles she has to take into the shower – we can also see that she’s gone in for a bit of hair dyeing, changing from her natural colour of Slightly Damp and Mouldy grey to a lustrous Slightly Divine and Minxy white.

But the question on everyone’s lips is: how much hair product does she need to get it to stay in that shape? We’re talking at least a seven or eight on the Hair News Now Today Spraycan-O-Meter. And in an exclusive reveal by KiaSA’s HNNT team, we’ve plotted data showing the times that Flemeth has washed and re-styled her hair along with the dates for each Blight since records began, and found that there is a direct correlation between Asha’bellanar (or Asha’BaByliss as her new corporate sponsors want her to be known in advertising campaigns) emptying half the world’s supply of hair aerosol into the atmosphere and the re-emergence of the Darkspawn.

Still, it’s nice to see that despite being the instigator of the scourging of the world on multiple occasions due to simple vanity, Flemeth continues to obey Health & Safety work regulations, attaching red warning tape to the sharp hair-horns that protrude a significant and perilous distance behind her head. We all know the dangers of working with a mad capricious shape-shifting dragon lady, but that’s really no excuse for not follow proper safety protocol and avoiding someone having their eye out on the end of one of those things, or being knocked unconscious when failing to duck under them in passing.