For those of you who were blissfully unaware, Friday was MMO Hard Disk Drive Destruction day. It seems that I’m one of the few people who celebrate this holiday, and it was with great excitement and anticipation that I got home from a long hard day at work, entertained my daughter for the evening and popped her to bed, before turning on my PC and finding that the HDD which was home to all of my MMO games had decided to retire from this life. Insert your own favourite line from Monty Python’s Parrot Sketch here. I don’t know why these things always happen on a Friday, but the fact that it is currently the one day of the week where I get together with a bunch of friendly others from the pool of Van Hemlock static group gamers and enjoy some hot MMO group action, probably has something to do with it. Thankfully I managed to recover the data from the expiring drive by using a little bit of trickery involving other operating systems less fussy than Windows, external cables, a Big Hammer, lots of swearing, and the customary blood sacrifice of a virgin – although I didn’t have one to hand, so I just used virgin olive oil instead; you can also use sesame seed oil if you prefer your sacrifice to have a more ritualistic smoky aroma. So I saved myself many gigabytes of downloads and many hours of painful UI customisation for my various characters across the multitude of MMOs that I play, but in the meantime I had some time on my hands, so I got around to finishing a few non-MMO projects.

Firstly, I finished reading The Wise Man’s Fear, the excellent follow-up to Patrick Rothfuss’ first book The Name of the Wind. It’s not hard to describe why I like the books so much, I think Rothfuss has a style of writing that is very easy to read, compelling without taking itself entirely too seriously, while maintaining a healthy balance between light and dark subjects. I put him very much in the same camp as Joe Abercrombie in this respect, although Rothfuss’ story tends towards the lighter side of fantasy, it serves only to make the dark moments that much more intense and emotionally fraught; Abercrombie’s tales, on the other hand, tend to run towards the dark side of human nature, while occasionally punctuating the darkness with bolts of light humour and joy. The character of Kvothe is pitched just the right side of brilliant and self-assured, without being obnoxious, and the world which he inhabits is fascinating, from the systems of magic, to the hand-talk of the Adem mercenaries, all the way down to the myths and legends, of which Kvothe himself is destined to become a part. If you haven’t tried Rothfuss’ books yet and you’re a fantasy aficionado, I couldn’t recommend them highly enough. And as evidenced by Rothfuss’ latest blog post, where he points out that The Wise Man’s Fear is currently number one on the New York Times Bestsellers list, it seems that many other people are in agreement. What’s more, towards the end of his post, Rothfuss describes how he feels that he needs to do something a ‘little bit rockstar’ in order to celebrate this success, and so what does he propose?

Which brings me nicely on to the second thing I did in-between hitting a hard disk drive with a virgin while sacrificing a hammer to the gods (what can I say: it was late, I was a bit drunk, and I got the instructions upside down): I finished my first play-through of Dragon Age II. 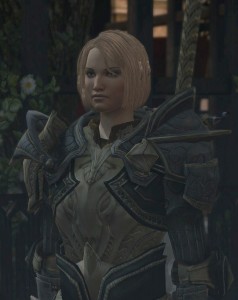 I enjoyed the game a great deal, but I’m very much a story person when it comes to Bioware games these days; I couldn’t really discuss the combat in much detail because I set the difficulty to casual, and as such there were perhaps only three fights which required me to drink a potion, let alone worry about tactics other than ‘Darkspawn? We attack! Huzzah!’. I found the companion characters to be interesting takes on standard fantasy tropes, and I enjoyed the voice acting on the whole; as I stated on Twitter, my favourite line in the game having to be Isabela’s “I like big boats and I cannot lie”. The city of Kirkwall is breathtaking (be sure to look up and take in the sights on occasion), and although the locations within it become familiar to the point of being mundane once you’re running through them for the eleventeenth time, I felt that the city never lost its sense of scale. Other than that, it’s a standard Bioware RPG, if you’re any sort of CRPG gamer then you know what that means, and you’ll also know whether it will appeal to you or not. If you want me to try to sway you, I’ll simply say: decent plate armour for female characters, woo! And I’ve included a screenshot of my Melantha Hawke in a favourite armour set from the game. 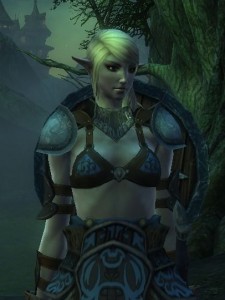 Contrast that with my High Elf warrior in Rift, who could be fighting off death invasions, or modelling for the cover of Heavy Metal Illustrated, hard to tell. I’m still not finding myself excited by Rift. I’m enjoying it as a dabbling diversion when other games aren’t drawing down my attention, but there’s something about the game that prevents me from being infatuated with it to the point of ignoring all other games, as I have done in the past with, for example, World of Warcraft and Lord of the Rings Online. Part of my issue is the global cool-down system for combat, which I don’t find to be the purported system which ‘allows me to carefully consider my options’, but instead something which restrains me and constantly calls me to heel. I imagine it’s the same sort of frustration felt by two dogs trying to have a loud and tooth-filled debate on who is the best at being a loud tooth-filled debater, while both are muzzled with their owners constantly yanking them away from one another by their leashes. It’s a shame, because the reactive abilities that the game includes – which are off the global cool-down and thus allow you to do something useful while waiting for your main abilities to come off their European Work and Time Directive mandated 1.5 second tea break – are an excellent way to break the system up, giving the player something to do in the meantime. Make the reactive abilities less powerful, maybe make them short duration buffs, say, and you could give players something to do during the global cool-down which would help during combat without unbalancing it. A two tier system, with the main abilities all on the global cool-down, but with a wealth of secondary abilities off the global cool-down, could create quite an interesting system, and one where I don’t feel frustrated at having to spend thirty seconds of a one minute fight chin-on-hand and staring at little glowing clocks counting down on my hotbars. There are reactive abilities in the game, but never enough to make the system as interesting and engaging as I feel it could otherwise be. My other issue at the moment is the fact that I decided to play a Guardian, mainly because being utterly agnostic in real life, I tend to veer towards heavily religious groups in my fantasy escapism, much as being utterly male in real life, I tend to veer towards heavily female characters (read into ‘heavily female’ whatever innuendo you so choose) in my games. The problem with the Guardians is that the first area in the game proper where they adventure is Silverwood: a big bright ancient fantasy forest, full of elves and goblins and ruins, straight out of the fantasy cliché text book. Not a problem, this is a fantasy MMO after all, but after you finish with Silverwood, the levelling conveyor belt passes through border control and takes you into Gloamwood… a big dark ancient fantasy forest, full of wolves and ghosts and ruins, or Silverwood II: The Gloomening, as I have come to call it. My character is level twenty four, and I’m really starting to struggle to carry on with the Kill Ten X quests interspersed with the occasional frantic frenzy of fighting a rift, which alas is nothing more than a zerg wrapped in the illusory cloak of cooperative game-play. Adventuring in Gloamwood feels like I’m still stuck in Silverwod after all this time, only someone has turned the gamma down, presumably to enhance the feeling of depression the player experiences as they’re told to go and find some bat wings because Random Quest Giver X needs them to create Token Artifact Y, in order to progress Arbitrary Plot Device Z.

Still, I’ve got plenty to be getting on with elsewhere, which is another reason why Rift is perhaps not capturing my imagination like I feel it should. I’m starting my second play through of Dragon Age II, this time as a mage, to see how the sissy-robe-wearing set like to live. I’m also still enjoying my time in Lord of the Rings Online, with the Burglar coming along nicely, albeit a bit slowly what with the abundant distractions provided by single player games, books and spontaneously exploding hard disk drives.