When starting out in Pirates of the Burning Sea I was drawn by the prospect of naval combat and sword fights, fearsome broadsides and boarding parties, chasing dastardly pirates around the Caribbean and consuming large quantities of rum. At the career selection screen the game presented three options:

A naval officer like the heroic Admiral Lord Nelson, working up to captaining a mighty ship of the line with devastating firepower ensuring the Britannia rules the waves! A noble calling! 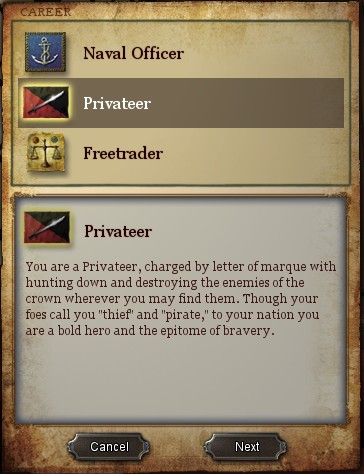 A privateer like the dashing Francis Drake, commanding a nimble frigate, sweeping down upon treasure-laden galleons in the name of His Majesty in between games of bowls and wearing enormous ruffs! The scourge of other nations!

An Independent Trader like…. erm… Derek Trotter. Buying and selling stuff in the ship equivalent of a Transit van. The stuff of… sitcom.

Needless to say Freetrader didn’t sound like what I was after at all, I picked Naval Officer for the prospect of some Really Big Guns, and that seemed to suit the game. Pirates of the Burning Sea has plenty of missions on offer, and they generally involve either sailing around shooting other ships with guns, or running around stabbing people with swords, historically areas in which the Navy has tended to excel. There are variations, of course; sometimes you stab people with swords, then hop into your ship and shoot other ships with guns. Sometimes you have to shoot other ships until they stop, then board them and stab people with swords. Sometimes you just need to have a nice chat with a few people, although it often turns out a smidge of sword-based stabbing is needed just to really emphasise what you were saying. For about 25 levels, all was going swimmingly (or rather sailingly, with a bit of swimming here and there when overambitious naval encounters led to regrettable negative buoyancy situations). Then I got bitten by the shipbuilding bug, and it turns out Freetraders actually have quite a few advantages when it comes to trading and production. Who would’ve guessed?

This is a bit of a dilemma. My Naval Officer isn’t completely useless at production, and with a bit of assistance has set up a shipyard, but has some drawbacks compared to a Freetrader, notably not being able to globally search all auction houses to hunt down bargains and not having access to the really big hauling ships to shift large quantities of raw materials. On the other hand a Freetrader isn’t completely useless at fighting, but isn’t really up there with a Naval Officer, especially if specialising in the “travel quickly around the map avoiding taxes” skills rather than the “SHOOT PEOPLE IN THE FACE WITH CANNONS!” range.

It’s a shame PotBS has the three fixed classes from the start. The early levelling process seems to be very similar for everyone; there’s no difference at all in avatar combat as far as I understand, any class can pick any of the fighting styles. There are very few restrictions on early ships, Freetraders can quite happily captain the same brigs and light frigates as low level Naval Officers and Prvateers. The quests are the same, including the nifty main story quest, apart from class-specific quests every five levels that see Naval Officers climbing up the ranks (mostly by sinking the French), Freetraders brokering deals or engaging in industrial espionage etc.

For somebody new to the game there’s a fair bit to get to grips with without even considering the economy, and I suspect I’m not the only player to only take an interest in production after a couple of months of more combat-focused operations. With an EVE-like skill system you’d perhaps have the option of pausing with the combat development and switching to build up your production skills for a while, but less structured skill systems can be a pretty tricky proposition as per the big debate a couple of months back. A model that would seem to fit rather nicely would be the tiers of increased specialisation of Tabula Rasa, where everyone started out as a Recruit for five levels before selecting Soldier or Specialist, then from e.g. Solider to Commando or Ranger, Ranger to Sniper or Spy. In Pirates of the Burning Sea I don’t think it would do any harm for everyone to, say, start out in the Navy for ten or fifteen levels before deciding whether to continue that career, resign to focus on trade, or go freelance as a privateer. Something else Tabula Rasa had was a cloning system, so that before making one of the specialisation decision you could create a clone, and follow an alternate path without having to re-do the earlier levelling. Obviously cloning wouldn’t fit in so well with the 18th century (apart from that Doctor Who episode where it turned out Calico Jack was part of a Sontaran clone army out to seize a Spanish galleon carrying what the crew thought was an Aztec relic but was really the Great Key of Rassilon), but family members would make sense; if you’ve had enough of trading, return to a “New Family Member Introduction” point as the brother/sister/uncle/second cousin and select a different career.

In the absence of such mechanisms, in a bid for the best of both worlds I’ve settled for rolling a Freetrader alt on a second account to focus on production while the Naval Officer keeps shooting people (with guns). It works quite well, running two instances of the game in different windows, as when one character needs to make a long journey for a class mission or to pick up some exotic supplies you can indulge in a spot of what Van Hemlock has dubbed “Galleon Bowling”: point your ship at the destination on the other side of the map, accelerate to full speed, then alt-tab over to the other character (or a web browser, or go and make dinner or something). When you return you get 50 points if you can just click to dock at your destination port (with 10 bonus Danger Points if the journey took you through a red PvP circle and you blithely sailed AFK through pirate infested waters), 25 points if you’re bumping into the coast in the general area but out of clicking range, and 0 points if you forgot you were supposed to make a course adjustment halfway through and ended up in Newfoundland.