There’s always talk about MMOs having a perfect launch, but it’s surprising how much goodwill players will show if the game offers a compelling enough experience. The Secret World is definitely not a disaster when it comes to bugs, but I can think of a few MMOs which were more finely honed by the time of their release and yet failed to garner the positive post-launch attention that TSW is receiving. In terms of coding snafus TSW is a squatter’s lice-infested pallet compared to the Queen’s immaculate mattress of Tera, and yet I think it’s fair to say that TSW is by far the more popular and favourably reported upon game. So all this talk of polish and perfection upon release seems to me to be so much bunkum. What players are really looking for is a game world and game experience which offers hooks which are sufficiently compelling – do this, and players will forgive you an awful lot. World of Warcraft was horrendous at launch, I mean truly unplayable twenty-second-wait-to-loot-a-corpse awful, but it was forgiven that and more, because it offered an accessible and compelling gaming experience like no other before.

I’m not saying that MMOs shouldn’t aim to be bug-free at launch (or as close as one can reasonably expect within the realm of complicated software systems), but it seems to me that TSW provides positive evidence for the case that players are more forgiving than is often portrayed, *if* they are given a reason to believe in a game. Refine the detail and the design, and players will forgive an awful of inconvenience in the implementation – at least until you’ve had a chance to fix it.

The two big issues in TSW for me at the moment are the broken chat system and a not insignificant number of bugged quests.

Chat is just broken, full stop. Period. End of. It’s over. Finished. Done with. Over with and done. Finished over and done with. Full period, end stop. From my experience, TSW’s chat system is currently the most mind-warpingly malign monster in the game.

I like to have General, Looking For Group and Mission SpoilersHints turned off, as they are the usual pit of endless quest spoilers, inane self-idolatry, pedantry, passive-aggressive arguments, abuse and drivel. The TSW chat system insists on turning them on – when I log in; when I change zone; when I dare to glance at my chat window. Of course there is an option to turn off auto-subscribing to channels, which, when used, does indeed stop these channels from being added to my chat window – along with all the channels that I do wish to see. What’s more, if I manage to get them working at all, the channels that I do want to view are then unsubscribed by the chat system at every seeming opportunity. It’s like some sinister sentience is controlling my chat window: I’ll see the tab for a private chat channel update, whereupon I glance across to read the message, only to find that the private channel had been dropped a while back, and in its place the dastard of discourse had popped up a message from Sky TV’s The Spoiler Channel (Sky 666)

“Today on The Spoiler Channel, Harry ‘Smugpants’ McPhearson takes us through the entire solution to the quest The Black House, but first-up it’s time for Blurt the Keypad Code of the Day with the Reverend Joseph ‘Obdurate’ Johnson”

Funcom are aware of the issue but have yet to exorcise the demons from chat, so for the time being I’ve taken to hiding my chat window off the bottom of the screen, where it haunts the edge of my vision and calls to me with a siren song which promises sensible parlance. But I know the horror which lurks therein: the Necronomiconversation. 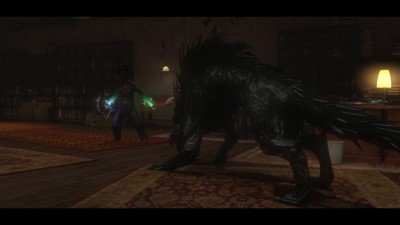 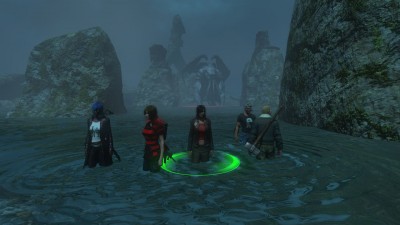 What did you DO, Ray?

The Secret World is a deeply splendid game which brings with it some intriguing game-play elements, but it also remains a little bit buggy in places, as is the Funcom way. Certain quests are particularly susceptible to bugging-out, quite often when more than one player is trying to activate a step or solve a problem at the same time.

Investigation quests are one of the more interesting elements of the game, requiring players to use lateral thinking and powers of deduction to solve a chain of clues and riddles in order to resolve a mystery. Some of the answers to this particular type of quest are really quite obscure, and often require a significant leap of intuition on the part of the player.

But the really fun part comes when, after hours of increasingly more ludicrous attempts at solving the problem, with one’s character hanging upside down from a street lamp by one leg, with underpants on its head, candles in its ears, and its naked body covered in marmalade, one gives up in frustration and looks up the solution online, only to find that the quest is bugged and that the correct solution was, indeed, to simply put the key in the lock.

I wonder if Funcom should start a timer running when the end-user license agreement pops up on the patcher for The Secret World. I’d like to know the average time a player spends reading it.

I managed “End-user Agreement. PLEASE READ CAREF—” before the natural instincts of my index finger, honed over years of MMO quest accepting, and moving faster than the speed of thought, slammed itself knuckle-first from the top rope onto my mouse button while screaming “WHATEVER!”. I think that’s a new record of endurance for me.

The nice thing about accepting quests in The Secret World is that the nature of the game encourages you to stay a while and listen. Clues and hints, as well as atmospheric snippets of lore, are contained in the dialogue, and although the pertinent quest text is always included in the player’s journal, there are often still very useful titbits to be had by listening to the whole story from the NPC quest-giver. Not to mention the fact that the stories are simply compelling.

For me, the difference between The Secret World and Star Wars: The Old Republic is that the conversations in TSW seem bigger somehow. Most quests (outside of the main story) in SWTOR seemed no more than idle incidental background to excuse getting the player to kill ten womprats, whereas every quest dialogue in TSW seems to be part of a greater whole—part of a connected universe. Yes, even the ones getting you to go and kill ten zombrats. Ragnar Tørnquist has always been a great storyteller; whether you enjoyed The Longest Journey series as a game or not, it’s hard to deny that an epic tale is told within. I think a lot of Tørnquist’s talent shines through in the overarching story of TSW, which is revealed as much through the amalgamate of minor tales divulged with every quest, as it is through the main story quest; something which makes this small world feel more authentic than an entire galaxy of quests, far, far away.

The Secret World once again puts the lore in explore—one of the aspects of play which I’ve been missing in MMOs for quite some time. 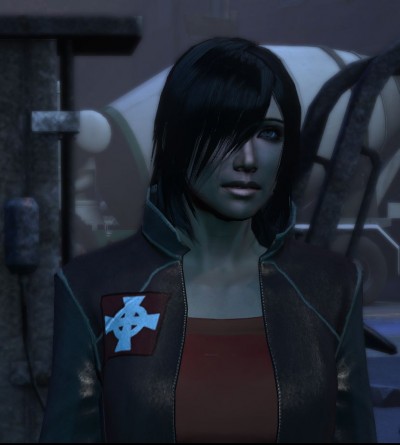 Lots of talk on Twitter and elsewhere in the past few days regarding the first rumblings of the beta for The Secret World, which is finally (here’s some preliminary hype from two years ago) getting set to reveal itself to a select number of ‘testers’. Bonus irony points for how quickly the NDA is broken and a wiki with all the secrets of The Secret World is launched.

I’ll be interested to see if they’re honouring the automatic invites for those who were subscribed to Age of Conan way back when; I really should login to my Funcom account at some point and check.

However, a lot of discussion seems to be focussed primarily on deciding which faction to play. There are the Dragons, who look increasingly like the World of Warcraft Alliance of TSW, and the Illuminati, the only group whose name registers as an error with my computer’s spelling checker: a conspiracy I tell you! The Templars seem to be a less popular lot, so for those who may have forgotten, allow me to again perform the minor miracle of being someone who advertises their cause.