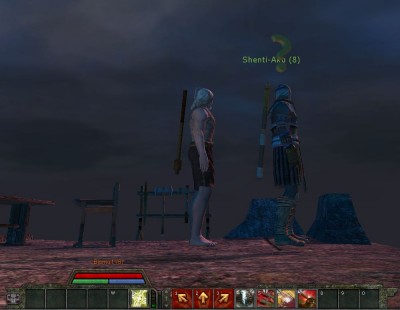 Here we see a classic display by the world famous freeform synchronised floating team of Tortage Volcano, performing one of their signature manoeuvres: the Shinkansen. I’m not sure why characters in Age of Conan seem to spend a lot of their time floating off the ground, perhaps the belts that are worn during the Hyborian age are more than just simply a tool for holding up one’s trousers or skirt, and are in fact part of a powerful magnetic levitation system that runs throughout the land.

It has also been hypothesised that the average diet – consisting of rare-cooked meat and large quantities of vegetable matter – caused an excessive build up of methane in the digestive tracts of the people which, when ejected at pressure from the body, combined with the rigid tough leather kilts of the time to generate the effect of a rudimentary hovercraft. Further weight is added to this theory when one considers the general grumpiness and aggressive tendencies of the vast majority of the global population at the time, something which could very well be attributed to the daily assault on the senses that they suffered. Although the era of peace that followed was attributed in great part to the reign of King Conan, an alternative theory suggests that it correlates more closely with the invention of the nose peg by Hieronymus Pimhole II at the turn of the century.

Another less well supported but similar theory suggests that foot hygiene at the time was so poor that people walked around on a permanent layer of funk. The observation that people living in the Hyborian age were able to stop floating and fully submerge themselves into water as soon as their feet were wetted (and therefore cleaned) does add some credence to this supposition. The theory also sheds some light on the writings of several natural philosophers of the era, including Stoltin the Mature, who described most of the natural world in flavours of cheese, and whose most famous work – Memory of the Horridly Persistent Ammonia Honk of a Rose – shows clear signs that the people of the Hyborian age had trouble penetrating the incredibly powerful hum that their feet produced.

The theory that it’s a cheap trick of perspective used by naughty gods to make people look like they’re walking on the floor unless viewed from close to ground level, is clearly bunkum, however.