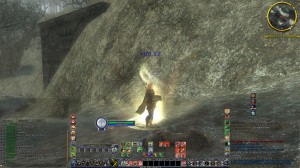 My Warden hit level sixty five in Lord of the Rings Online last night, my second character to the level cap, with a third, my Champion, sitting beardy (well, dwarves can’t sit pretty, can they) at level sixty three. Lummy though, it has to be one of the sadder and more despondent experiences of a ding I’ve had yet. There’s something slightly masturbatory about soloing in an MMO: you busy yourself with getting to the next ding, and it’s all pleasant and enjoyable enough, you’re happy to be ‘hunting for the boar in the undergrowth’. Bashing the bog-crawler. Exploring the depths of Moria. Skinning the cave-worm. Killing ten rats… no, that one doesn’t work. Then finally you reach that pinnacle of achievement and effort, an explosion of light and sound, an ecstasy of elation, and there’s nobody there to share it with.

You look to an empty or perhaps non-existent guild channel and all you want to do is type ‘Yes! Yes! Oh my Diety! Yessssssss! Ah ha ha hum na hum na hum na mmmmmmmmmm ahhhhhhhhhh’.

Or ‘Ding’ — y’know, whichever way your guild celebrates a level-up.

There’s nothing quite like the gaping maw of silence to bring one’s exaltation of joy to an abrupt and premature end as it is gobbled up by the nothingness of the noiseless infinite. This isn’t the reason for my sadness though; I’m quite used to, and happy with, soloing my way through adventures, and although I think adventuring in the quiet company of people with whom you are comfortable is definitely the richer experience, there are those of us who are very happy with their own company too, and there’s still the, albeit quieter, internal glow of satisfaction when you reach the levelling plateau. As the saying goes: an introvert is never alone.

The sadness didn’t come from my own quiet solitary celebration, but the fact that the server was not in the midst of celebration and revelry itself. As a player on the European servers for Lord of the Rings Online and an inhabitant of the world wide MMO blogosphere, I am all too aware of the vacuum of excitement and revelry there is compared to our North American server cousins who have launched into a new adventure across distant lands in the free-to-play age, whereas our expedition has been unexpectedly waylaid by Saruman before it even got started. My solitary ding without fanfare resonated with the quiet of the server – a scourged Shire where a celebration around the Party Tree should have been – and amplified the frequency of melancholy until it distorted into a gloomy disquiet. I couldn’t help but pause to reflect on the debacle over Codemasters handling of Dungeons and Dragons Online, persisting for whatever reason to adhere to a subscription model in the face of overwhelming evidence that Turbine’s free-to-play experiment on the North American servers was a resounding success – evidence provided, in part, by the comparatively eerie ghost town that the European DDO servers have since become. Codemasters have promised that free-to-play is coming to their LotRO servers soon, but I’m not so sure. Even if they do intend to exhale the breath of free-to-play life into the servers, the current wealth of excitement already rippling through MMO blog sites will probably mean that the mass exodus to the North American servers has already begun. MMO gamers are impatient souls in the main, they wait for a thing as the flooding river waits for the dam: they are constantly searching for a way around the obstacle, frothing and building in a bubbling frenzy until the banks are burst and nothing but the destruction of developers’ dreams are left in their wake.

I did have an amusing moment in LotRO as I finished my final ascent of the levelling crag, however. I was running back to the ticket stall of Mithecad in Mirkwood, where the vendors dole out little ring-shaped bands to allow you to go on the various rides in that part of the park, and I was doing the standard player impersonation of a steam locomotive pulling a very long train of orc carriages, possibly with a warg caboose but I couldn’t really say: it was a very long train. I barrelled into the middle of the NPC-filled fort with an utterance of “Elven Guard of Mirkwood, I choo-choo choose you!” and imagined a dishevelled and somewhat distraught armoured elf being forcefully ejected from his Poké Ball home into the midst of what had now developed into a veritable horde of angry orcs. However, from past experience I knew that the guard was an excellent tank with a particularly well articulated “Yo Momma!” taunt that always grabbed the attention of anything that was following me. Having only ever had one or two orcs following me on previous occasions I therefore had no reason to suspect that the taunt only works on one or two mobs. So the valiant guard on the side of the fort from where I had entered, promptly grabbed the attention of two orcs, as was his duty. And the fifteen other angry orcs followed me on in to the fort. The fort filled with armed NPCs. Who apparently were on a tea break, or perhaps were having union problems, and who entirely ignored the Warden being beaten to a pulp in front of their very eyes. The Warden who had been running errands for them, helping them, healing them, and protecting them. With a rapidly dwindling health bar I ignored the room of Iscariots for the moment and ran out the other side of the fort where the other guard leapt from his casual slouch against the wall dropping his cigarette, straightened his helmet, and did his best to grab the attention of another couple of orcs. At this point I’d lost a few more orcs to the curious but thankfully prevalent epidemic of attention deficit disorder that plagues the mobs of Middle Earth, and I headed back in to the safety of the fort, rather than keep running and risk grabbing the attention of yet more orcs. Being the heroic figure of lore that my character is, and also a member of the incredibly overpowered Warden class (please don’t tell Turbine), I whittled down the remaining orcs using my tried and trusted Hedgehog of Attrition manoeuvre (patent pending) as the other NPCs watched blithely on.

I tried to picture what was going on in the minds of the NPCs, battling the forces of Sauron by proxy: happy to send adventurers off to fight the good fight, but entirely unwilling to lift a finger if the fight comes to them, and all I could come up with was the following:

“Gerald. Geeeerrrrrald! There are ruffians in our camp.”

“Just don’t pay them any mind, Marjorie, and they’ll go away eventually.”

“Do something, Gerald, they’re making a ruckus and disturbing the whole neighbourhood.”

“I tell you, it’s best to pay them no heed they… no, don’t look their way. Oh, now look, they’re coming over this way.”

“You got a problem Elfy?”

“Now you give that back young man, this instant.”

“‘ere lads, look I’m an Elf. Lar dee, lar dee, dar. Oooo, me underpants are too tight and me hair is all girly.”

“My wardrobe of fine dresses! Oh my beautiful hair brushes! Oh no, no, not my collection of hand creams! Ruined! This is all your fault Marjorie!”

“My fault?! If you actually knew how to use that sword rather than just waving it imperiously at any passing adventurer who happened to walk past.”

“Oh! Oh! So that’s it is it? You were quite happy for me to boss them around when they were fetching orc manure for your flower borders.”

“I can’t dirty my hands with manure! I’m an elf and an NPC, and a lady, Gerald, if you would only bother to remember this from time to time…”

“Oh not now Marjorie! Look, the adventurer is coming back. Quick! Stand still and pretend you haven’t noticed the ruffians looting the place – maybe she’ll fight them off.”

“Fine. Fine Gerald. But when the orcs are all gone, you get your sword… you get your sword and you command an adventurer to get me some shampoo and conditioner, I’ve developed quite the hedge of split ends over this whole dastardly affair.”

Finally, here are a couple of pictures of Madgala, Hedgehog of Mirkwood, resting-up amongst the golden leafy boughs of Caras Galadhon in preparation for taking the fight in to Enedwaith. The question remains as to whether she will have to do it alone.

Frodo: I cannot do this alone.
Galadriel: You are a European, Frodo. To play on a Codemaster’s server is to be alone. 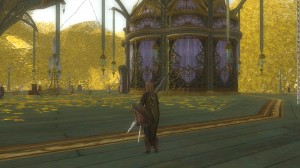