“Billy lives in a swamp in Mirkwood, where he does nothing all day long. Isn’t that right Billy?”

“In fact, Billy seems to be utterly pointless in all respects. His internal organs are not required for any quests in the area, he barely moves from the spot where spawns, and he drops no interesting loot whatsoever. You’re useless, aren’t you Billy?”

“Billy isn’t alone, though. He has hundreds of friends just like him dotted all around his swamp. They especially like playing together in the shallow pools of water, where adventurers can’t see them hiding. Do you like paddling in the water Billy?”

<Billy perks up and nods enthusiastically>

“Billy and his friends mainly like to annoy the heck out of adventurers. It’s their favourite game of all. Do you like to make adventurers cry, Billy?”

“Billy and his friends chase adventurers for no real reason. They get underfoot when the adventurer is trying to fight mobs that they need for a quest; they interrupt adventurers when they’re trying to pick up an object, making them start all over again; and generally they make a nuisance of themselves. Are you an utterly pointless nuisance Billy?”

“It takes forever to kill Billy, for a small worm he has an astonishing resilience to swords, axes, spears… most weapons, in fact. Not only does he interrupt and annoy, but he can’t take a hint and just f’ing well die either, can you Billy?”

<Billy shakes his head – no>

“No sir. An adventurer might think it wise to just run away until Billy gets bored, but Billy has a very long attention span and will chase you for miles and miles. Isn’t that right Billy?”

<Billy pretends to have been distracted>

<Billy rocks his head back and forth in feigned laughter> 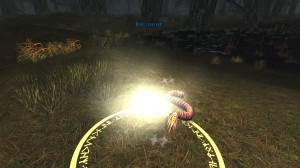 “But running away from Billy is pointless because, as I’ve mentioned, Billy has many friends in the swamp. Here comes one of Billy’s friends now. Hello Bernard Bog-light!”

<Bernard bobs up and down>

“Yes sir. Bernard lives in an area where there’s a wonderful debuff that slows adventurers run speed down dramatically and quickly drains all their power. Bernard is a bit of bastard, aren’t you Bernard?”

“Indeed. Together, Bernard and Billy play happily together, making the lives of adventurers even more utterly miserable, if that were at all possible. However, Bernard is at least required for a quest in the area, whereas Billy is just pointless. Are you more important than Billy, Bernard?” 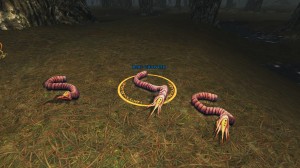 “Oh look, some of Billy’s other friends have come to play now. Here are Barry and Benny, they are Bog-Crawlers too. Barry and Benny are Billy’s best friends, because they’re just as pointless as he is. They all live close to one another, just close enough that an adventurer can’t run past them without having to join in their wonderful games. Billy, Barry and Benny most like to play Let’s Annoy the Feck Out of Adventurers. The best part is when they make the adventurer scream obscenities or cry. Billy likes to watch adventurers cry.”

“Although they are tough (and pointless) Billy, Barry and Benny are also no threat whatsoever. They barely do any damage on their own, and so all they’re really good for is annoying adventures and getting underfoot in a tough fight or when the adventurer is trying to perform an action. Eventually one adventurer will be so infuriated that they will take the time to turn around and chop Billy and his friends into teeny tiny little bits, and then jump and down on their remains, before urinating on them, and possibly setting fire to the whole sorry mess.”

“That’s right Billy, time to die. And although it will be a pointless death, because you are a pointless artificial cock-block of a creature placed by lazy level designers who simply seem to want to make their players regret every moment of their online time and having paid money for such a shoddy, miserable, blatantly obstructive tedious excuse for adventure, there will be a very brief moment of satisfaction for me before another ten of your friends turn up and ineffectively attack me while I try to loot your stupid skinny corpse.”

<Billy begins to back away nervously>

“Look children, who’s here? It’s Billy, Barry and Benny. They are dead. Very dead. See them not being alive. Even in death Billy was annoying though, performing some sort of overly dramatic death throe rather than just curling up into a neat little ball like Barry and Benny. Drama queen to the last, weren’t you Billy?”

<Billy’s corpse rolls over slightly as it is kicked>

“Well, it’s time for Billy to go and sleep with the fishes, children. Join me next time when we’re going to go and meet Colin craban and his annoying friends. Until next time children, goodbye. Goodbye! Say goodbye, Billy.”

<Fade away to the sounds of furious stabbing…>