Not much to report for Hat News Now Today from The Secret World so far, with a distinct lack of hats in the early part of the game, something of a theme in MMOGs. First tiers of WAR: no hats. First planets of SWTOR: millinery-free zone. Early WoW: les chapeaux? Non. There must be something about hats that precludes their sale to new adventurers. Is it the worry that overconfidence and inexperience may lead the novice to adjust their headgear to an angle of inappropriate jauntiness, such as would cut a fine dash when strolling through a peaceful capital city, but resulting in a restriction of vision that could prove fatal in an ambush situation?

Via Ysh, there’s a splendid guide to the cosmetic items available at Pangea, the clothing store in London, but there’s a distinct lack of hattery there. Quest rewards offer a couple of options, I’ve picked up the baseball cap for completing missions in Kingsmouth to go with a couple of others acquired in the pre-launch Secret War, but a baseball cap is hardly going to excite the Hat News devotee like a crocodile skull.

In lieu of hats our correspondent has been taking a look at weaponry. Selecting the Blade skill, there are some fine swords on offer: 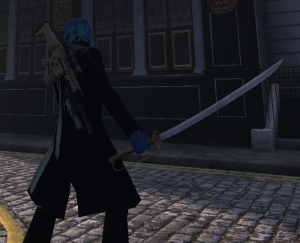 Not a bad start, pretty functional, has a pointy end which is generally considered a Good Thing by sword aficionados. 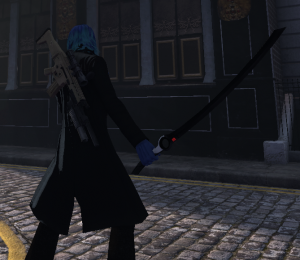 Rummaging around the wreck of the Polaris may yield this techno-katana if you’re lucky. Note the ring that allows you to clip your house keys on there, perfect for the forgetful adventurer.

Having spent a while both fighting and avoiding other players, your correspondent had earned enough tokens for a Quality Level 6 weapon from the PvP vendors in the society base. Exciting times! What sleek, deadly implement would be available? What sort of style would the new blade be? What… 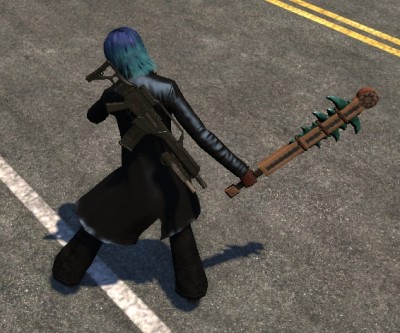 “‘Scuse me, Mr PvP Weapons Vendor”
“Yes?”
“There seems to be some mistake… I asked for a sword”
“Yes”
“And you gave me this plank with a couple of nails banged into it”
“Blade, QL6, one of. As requested.”
“Right. Right. Look, I see where you’re going with the style, very Aztec, got the macahuitl vibe, that’s great, I hear tribal is very in this season, obsidian is the must-have igneous rock, it’s just… I’m going to look a right twazzock lumping this thing around”
“I just give the things out, complaints are downstairs, in the basement, in the disused lavatory with a sign on the door saying ‘Beware of the Leopard’. Next!”

Fortunately there is a solution. For 30 Sequins of Solomon Island you can buy a kit from the Council of Venice that, when combined with a weapon, produces another kit (destroying the original weapon in the process). This new kit, when combined with a second weapon, applies the appearance of the first weapon to the second. Alternatively, for another 10 or 20 Sequins, you could just buy a QL5 or QL6 sword from the Council that doesn’t look so bloody stupid. At least I hope it doesn’t look so bloody stupid, I didn’t have enough Sequins left to buy one…