Having spent upwards of twelve minutes in the various PvP battlegrounds of The Secret World over the past week, the KiaSA team are now masters of the ancient art of peeveepee, and ready to share their secrets with you…

There’s no general world PvP in The Secret World, which is excellent if you want to team up with friends from different societies to tackle daemonic hellspawn, less useful if you want to sneakily kick a Dragon in the nuts and feed them to zombies. To sign up for PvP either hit “P”, select “PvP from the menu or click the little crossed swords under the mini-map. You’re then presented with a map with three destinations: Fusang Projects, Stonehenge and El Dorado. Select one of these and hit “Join”, you’ll be placed in a queue, and when there’s an available space you can join the battle. Above the “Join” button you’re given a choice of three possible uniforms that broadly correspond to the traditional roles: High Powered Weaponry for DPS, Reinforced Armour for tanks and Integrated Anima Conduits for healing. The uniforms slightly adjust your stats (e.g. High Powered Weaponry boosts damage by 5% but reduces healing by 5%), and also give a visual cue as to what sort of opponent you might be facing, though with the flexibility of builds in The Secret World they could also be bluffs; someone in a healing uniform might really be an undercover tank focused on self-heals… Uniform chosen, it’s time to fight!

The Fusang Project is ingeniously concealed under the PvP section, but is actually a completely different type of warzone, a Player Avoids Player area. When you first enter the zone you should see a terminal with three available missions: Capture a Facility, Capture an Anima Well and Kill 10 Players. Under no circumstances pick up the latter mission, it’s a trap, take only the first two. Then, open the map, look for a mass of players from your society (also know as “the zerg”), and run towards them. If you see an enemy player on the way, ignore them completely; if they attack you, stand immobile, thank them profusely as they’ve probably saved you some running, wait to die, then check the map for the closest respawn point (Anima Well) to as many of your society as possible. Select this well from the dropdown list, respawn there, and join the zerg.

All being well you should be heading for an enemy-held Facility. There are four of them on the map: East, West, South and Centre. Each is guarded by an automated turret and forcefield outside the main gates, and a big old Guardian Type Monster thing inside. When you arrive at the Facility everyone should stand near the turret and mash random keys until it’s dead, then run inside and mash random keys until the Guardian is dead, then someone clicks on a thing, you claim the facility, and get stacks of XP and PvP tokens from the mission. If you forgot to pick up the mission beforehand, you’ve got time if you’re quick to pick it up from the facility itself after the guardian dies. If you’re lucky the turret might already be down by the time you arrive at the Facility, if you’re *really* lucky you pitch up just as it’s captured, and you get your XP for nothing and the tokens for free.

After phoning in the mission completion run outside, and hopefully at least a few people will be heading for an enemy-held Anima Well; tag along with them, stand near the well while it’s captured (or click on it, if nobody else seems to be), phone in the second mission for more XP and tokens, then leave the zone with all speed. You can return once the timer on the two missions has expired, if you like.

If your society is so dominant that it holds all four facilities, or so unpopular that there’s only three of you in the zone, leave at once. You may be tempted to try and “fight” some “players”, but that would be silly. The Fusang Project is a cunning allegory, demonstrating that if we all just work together and seize the means of production from faceless entities we’ll be showered with rewards, but if we turn upon each other and fight then everything just bogs down in pointless slaughter, and nobody gets cake and medals.

Stonehenge! Where the demons dwell

If you actually want to fight players, Stonehenge is the destination for you. The Stonehenge battlefield in The Secret World is an implementation of the summer solstice at the actual site. The Dragons represent a bunch of new-age hippies, anarchists and similar types trying to get to the stones for some sort of festival that probably involves joss sticks and falafel. The Templars are law and order, representing the police who want to stop them, and dish out a beating to some crusties while they’re at it. The Illuminati are the press, ostensibly there to observe but really trying to engineer a fight for some good pictures, and as they simultaneously represent both The Daily Mail and The Guardian, they’re equally hated by both the other groups.

Your side scores points in Stonehenge by having the most (live) players within the big circle in the middle of the map, so what you really want to be aiming for in this battlefield is:
1) Standing in the circle
2) Killing enemy players

What you should *not* be doing is:
1) Standing outside the circle
2) Being killed by enemy players

As this is pretty complex stuff, here’s a diagram to help out. Look up your standing-in-the-circle-ness on the X-axis, and your killing-or-being-killed-ness on the Y-axis, and check the resultant advice in that quadrant: 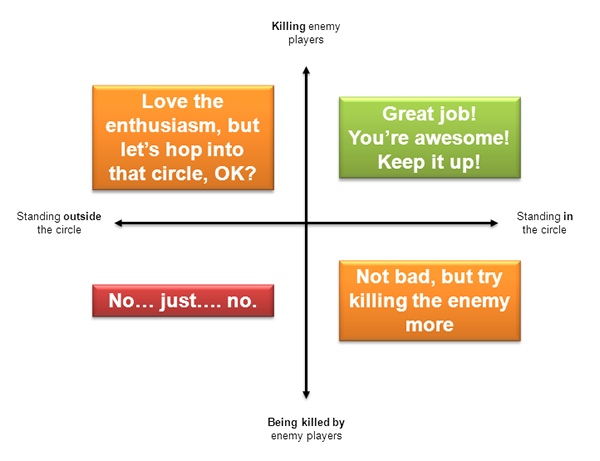 Unfortunately I can’t tell you anything about the El Dorado battlefield for two reasons. Firstly it seems less popular than the others, so the queue for it is much longer. Secondly, upon joining the queue I’d fire up YouTube on the in-game browser and spend the next hour singing along with the theme tune to Mysterious Cities of Gold, thus missing the “Join” window if it ever did turn up. Aaaaahhhh, ah ah ahh ahhhhhh, searching for the cities of goooooollldd…