So here’s the latest problem that I discovered when I had a quick dip into City of Heroes just the other day; they’ve gone to all this effort to put day jobs into the game, and then I go and roll a new character who already has one: 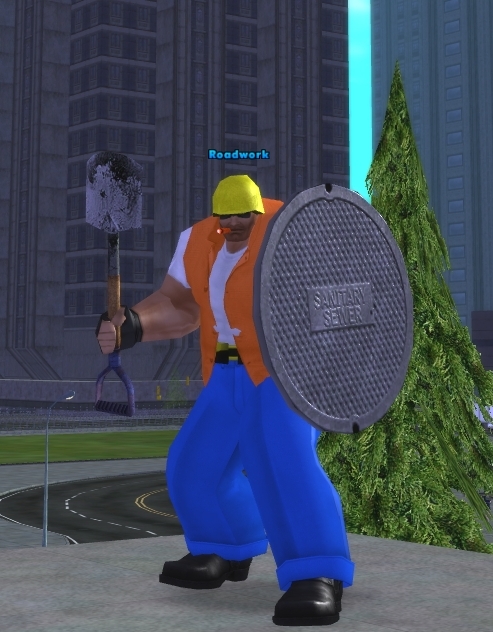 Well, I had to give the new Shield powerset a quick test run, didn’t I?

What’s that? Excuse for making another alt you say? Noooooooooo. Honest independent journalistic research, that’s what it was.

After letting the dust settle for a couple of days, I believe I can confidently and officially state that I have no idea exactly what the business model of Star Wars: The Old Republic will be, and therefore I am either outraged or delighted by it, and will definitely be playing it and supporting BioWare’s innovative and brilliant plans or possibly boycotting this hideous abomination, and urge you all to do the same. Huh, bang goes that idea for a rant. Fortunately SOE stepped in to the breach with the Station Cash announcement, though really I’m fairly agnostic on the whole RMT business, by which I mean I believe it’s inherently impossible to know the ultimate nature of such transactions due to our natural inability to verify any experience except through another subjective experience (I’m hoping if I repeat that enough it’ll become a catchphrase, and people will shout it at me in the street.) Vaguely seriously, as with so much else I think it’s pretty daft dealing in absolutes like “RMT is evil and I’ll never touch a game with microtransactions!”; if done reasonably so you’re not having to pump pound coins into a slot in your PC every couple of minutes, why not? I doubt very much the subscription model is going to vanish, and some alternatives perhaps geared more towards shorter “dip in” sessions would be interesting to try.

Though I can’t get terribly worked up about RMT, there was something in that slashdot piece that drove me to green-inked blog madness. In the comments, an EQ player points out “Money, Time… what’s the difference”, and someone replies:

There is quite a difference. Money cannot buy authenticity. Authenticity in the game is built by spending the time in the game, having, as people above have mentioned, experiences in the game. To have worked through things like that ‘builds character’, as Calvin’s father might say. Someone who buys a character, or buys stuff, got it ‘the cheap way’–he is not authentic. Think about a person who has a lot of money and goes out to become a ‘real cowboy’–He buys the horses, the land, the hat, expensive spurs, all the saddling and bridling, etc.–all a a premium because they’re ‘authentic’. Then he puts them all on and goes to try to hang out with ‘real’ cowboys. “Look at me,” he says, “I’m a real cowboy–all my things are authentic cowboy.” Of course, then the real cowboys laugh and tell him to keep thinking that, and to keep paying them to be his friend. Or they just beat the horse-shit out of him.

Now obviously there’s the nub of a point there. “Authenticity” (whatever that’s supposed to be) is built by spending time in game, having experiences in game, great, agree with that, yup (skipping over nuances like the fact that in MMOGs there’s often a lot of grind, and there isn’t much more “authentic” about one character that killed a billion rats using the same basic three attacks as another who killed ten rats, but the former’s got the “Amazing Rat Killer” badge and a bunch of purple loot with a 1/10000 drop rate). But then the cowboy analogy. “People in glass houses” and that, I’m sure there’s enough bad analogies on this site (some deliberate, though), but dear god what is it with people deploying rubbish analogies to support simple concepts? “Experienced gamers wouldn’t respect someone who just bought a high level character”, is that a huge challenge to grasp? “Nope, you totally lost me there, as a slashdot reader I’m intimately familiar with cowboys but have no experience of these ‘online games’ of which you speak, maybe if you put it in cowboy terms that would help?”

Just remember, a good analogy is like making love to a beautiful woman: you take two elements, propose that they have a relationship, and take care that the attribute of the first that you’re transposing to the second doesn’t render your argument invalid.