Our fifth visit to the Chalke Valley History Festival, on a new site this year, no less picturesque but slightly easier to get to. As ever there were all sorts of fascinating speakers, I started the day with World War II pilots Colin Bell and Keith Quilter in conversation with Will Iredale. Iredale’s splendid The Kamikaze Hunters covers the airmen of the oft-neglected British Pacific Fleet such as Corsair pilot Quilter, who was shot down in July 1945 and rescued by an American submarine where he spent the final weeks of the war. Bell was a Mosquito pilot of the Light Night Striking Force and completed 50 missions over Germany. They were fascinating, reflecting on the role of luck in their survival, both having returned from missions with flak damage that could easily have been fatal.

Around the site were living history encampments covering various eras from Romans through to World War II, the re-enactors also giving demonstrations such as missile weapons through the ages with slings, javelins, bows, a trebuchet and early artillery. Napoleonic cavalry showed their skill at arms with sword and lance: 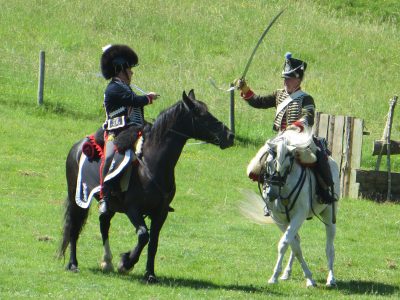 My wife then went to see Monty Don talking about the history of British gardens, with a minor interruption halfway through as a column of Vikings marched past to (mock) battle: 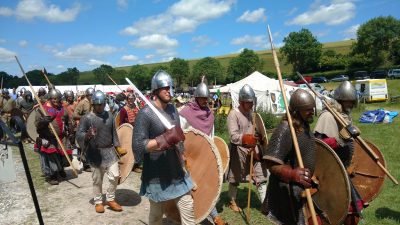 This year’s air display was a little disappointing; the Battle of Britain Memorial Flight’s Lancaster was unable to attend, and a Messerschmitt Bf 109 had engine trouble so was replaced with the Yak-3 that was there last year. On the plus side the only flying Bristol Blenheim gave a fantastic display, I hadn’t managed to catch it since its recent restoration before now. 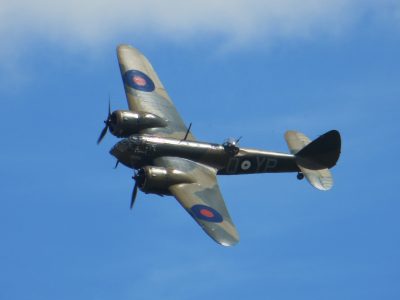 All in all another fantastic day out, helped by the glorious sunshine unlike last year’s mud bath!