Wargaming have gone some way towards atoning for past transgressions by adding British aircraft in the 0.5.3 update to World of Warplanes, so I thought it would be rude not to take a look at least.

As per most of the other tech trees there’s a decent core of “proper” World War II aircraft in the mid-tiers with more unusual stuff before and after; a good chunk of the the fighter branch is taken up by key Spitfire marks (I, V, IX and XIV) followed by a couple of Supermarine jets, the heavy fighter branch features the Beaufighter (albeit with stupid Mk V Boulton Paul experimental turret option), Mosquito and Hornet before wandering into the realms of prototypes. No sign of the Hurricane, presumably to be part of a future Hawker branch with the Typhoon, Tempest and Sea Fury. 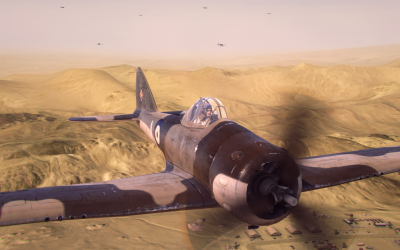 The early part of the fighter tree is padded out with some more unusual stuff like this Tier IV Bristol 146, based on a single prototype. I think the pilot might be David Niven, though he looks a bit grumpy about something; probably being stuck in a plane that even Hurricane pilots think is for remtards on free dinners and having to grind through the rest of Tier IV to get a ruddy Spitfire.

The heavy fighter line starts at Tier II with the Hawker Demon, a fighter version of the Hart inter-war bomber, one of the last RAF biplanes, still in limited service in 1939. 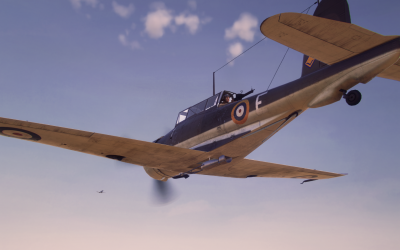 The Tier III Blackburn Skua, an early war carrier aircraft somewhat hamstrung by having to fulfil both fighter and dive bomber roles.  The model includes the swing bomb-crutch designed to throw the bomb clear of the propeller, though unfortunately it doesn’t animate on bomb release.

There’ve been a few other changes since I last tried the World of Warplanes beta. Aircraft handling in general seems a bit smoother; aircraft camouflage now works in the same way as World of Tanks, with separate summer/winter/desert/marine paint schemes offering slight concealment benefits; crew skills have been implemented, again very similar to World of Tanks. Overall, though, despite the improvements the general conclusions of my War Thunder vs World of Warplanes post still hold, I prefer the flying and damage modelling in War Thunder, and the different modes and battle types keep things fresh; War Thunder events even offer no-respawn Arcade action, if garage battles were a complete dealbreaker. World of Warplanes is fun for a drop-in blast, though, and at least you can fly Spitfires now.