Spaceteam, as the app description goes, is a cooperative iOS/Android party game for 2 to 4 players who shout technobabble at each other until their ship explodes. Alerted by tweet it sounded rather fun, so when we found ourselves with four people, two Android tablets, an iPad and a phone, we gave it a go.

It’s dead easy to pick up. Each player has an assortment of buttons, switches and dials with random techno-labels, and an instruction (such as the titular “Dilate Eigengeode!”) that corresponds to a control on somebody’s console, so you have to listen out for anything relating to your knobs (matron) while shouting at everyone else. It’s a bit like Simon Says, except you’re all Simon. On a spaceship. Shouting strange nonsense. 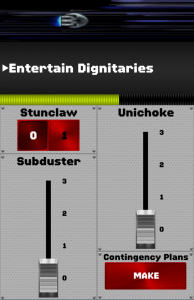 If you’re being serious about the whole thing you should probably take it in turns to calmly call out orders and get acknowledgement, but it’s a lot more fun if everyone just bellows at increasing levels of excitement and volume, which the game helps with various events like incoming asteroids, requiring all players to simultaneously shake their device, and control malfunctions obscuring labels or causing bits of your panel to fall off.

What really makes Spaceteam, both for those participating and as a spectator sport, is the control names. Some are plausible techno-babble, others have a hint of flushed grolling-esque innuendo, some are just funny. The overall effect is something approaching The Doctor playing Mornington Crescent with his companions while trying to pilot the TARDIS out of a particularly sticky situation.

The basic game is splendidly free from Google Play or the iTunes store, there are some in-game options you can purchase such as different visuals for the controls if you’d like to support the (Space)team; here’s the Steampunk version: 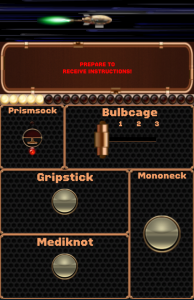 It’s incredibly easy to get running, we sometimes had a little bit of trouble getting four players simultaneously connected but retrying a couple of times seemed to do the trick, with Android and iOS devices working side-by-side in perfect harmony. The controls are a bit more fiddly on a phone than a tablet, but still entirely usable. Two space-thumbs up!