NOTE: Update 1.37 has changed a few things around, this post is now superseded by The Complete Beginner’s Guide to War Thunder

Do you like War? Do you like Thunder? If you do, you’ll love War Thunder! As long as you also love online World War II aircraft combat. In fact you don’t really need to have a view on Thunder at all, and you can hold a morally complex position about the terrible nature of War rather than simply liking it, but I don’t think Facebook have got a button for that just yet.

Anyway! To take to the skies, the first step is to sign up for an account at warthunder.com; if you have any friends already playing the game they may like to send you a referral link to get a few rewards. It’s the usual process: first choose a name, find out it’s been taken, choose a different name, find out it’s also been taken, add ‘xXxX__=+’ to the beginning and end of the name and substitute random letters with numbers to become ‘xXxX__=+De4thK1ll4zz+=__XxXx’, and watch the world tremble with fear at your undoubted skill. Not to mention grasp of grammar. Then choose a suitably strong password, like correct horse battery staple. Once you’ve created an account download the game client, which is 7Gb+, so might take a while. Why not make a nice cup of tea, maybe have a biscuit or two?

The first time you start the game you have to choose a country: 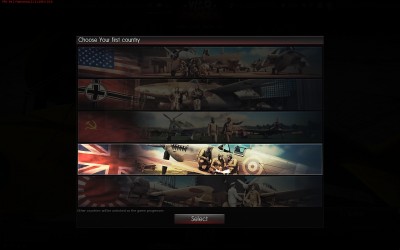 I vow to thee, my country, to shoot down the cads and bounders on the other team

This is quite important, as you’ll be restricted to flying aircraft of that country only to start with, you unlock the other nations as you progress. It doesn’t take too long to unlock all five countries, so don’t agonise too much; if you feel you’ve made a terrible mistake and can’t even face playing enough to unlock your preferred option you can always sign up for a new account and start again, though you’ll have to be xXxX__=+De4thK1ll4zz+=__XxXx2 this time.

There isn’t a massive difference in aircraft performance in the early ranks, so feel free to pick your preferred country for patriotic or historical reasons, or based on your favoured national cuisine, or because you like the style of the chaps doing their best catalogue poses in the above pictures. If you have no preference at all, or absolutely have to have any advantage you can, try the USSR as their Rank 1 aircraft is probably the strongest of the five. Also the “point off camera” is absolutely textbook, so they edge the catalogue pose category too. I’m going to pick the UK, though, tally ho pip pip God Save The Queen etc.

The game then asks if you want to complete the Basic Fighter Tutorial: 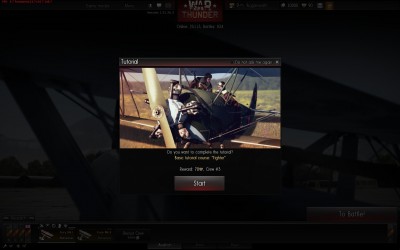 This is a Good Idea; certainly easier than Flying a Light Aeroplane Without Having Had Any Formal Instruction. Even if you have had some formal instruction it’s worth running the tutorial, it’s nicely done, short and to the point, and rewards you with 70 Gold Eagles and an extra crew. Gold Eagles are one type of in-game currency, like many free-to-play games there are two varieties: ‘Silver Lions’ are earned from playing, ‘Gold Eagles’ are generally bought with real money (though some can be earned as rewards for completing tutorials, recruiting friends to the game etc.) Don’t worry too much about currency for now, but you might want to save up Gold Eagles until you’ve a better idea how you might like to spend them. 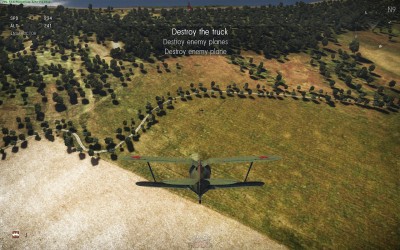 And you should soon master the basics: going Up! Down! Flying around, shooting up trucks and defying the ground. Five entire minutes is more than sufficient training for life-or-death aerial combat, don’t you think? So let’s put those newly acquired skills to the test.

If you were expecting to jump straight into a Spitfire you might be slightly disappointed to be starting off in a Hawker Fury, an open cockpit biplane, but like most aircraft in the game they do have actual combat pedigree from World War II; Håkans aviation page is a rather interesting place for information on biplane aces. 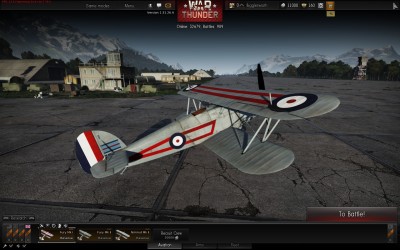 You can fly against AI opponents if you like via the “Missions” option under “Game Modes” in the top left, but the online PvP battles are the main focus. Hover over the “To Battle” button and, unless you’re feeling incredibly confident, leave it with “Arcade Battle” selected. One setting that you might want to change, at the bottom there’s a “Current Server” option; for the shortest possible queue you can change this to “Any available”: 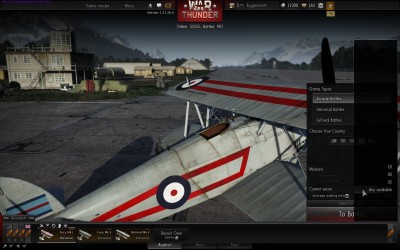 Fighting alongside (and against) players on other servers doesn’t seem to be a problem, I haven’t encountered any serious latency issues; you might not be able to understand general chat, but there are probably disadvantages too. Should some sort of tactical co-ordination be desirable you can always issue voice commands/requests in game via the ‘T’ key by default, or you could just shout detailed battle plans at your hamster for all the good it’ll do in a team of random strangers. Click “To Battle” to get started.

After a (hopefully) short queue and a loading screen, you’ll get the starting screen for the battle: 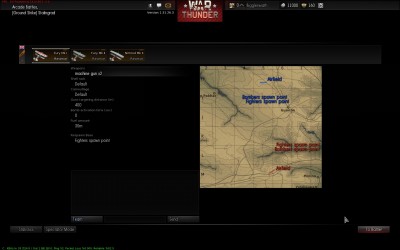 Oh, no, you’ve got the wrong map there. This is Stalingrad. You want the Ilfracombe and Barnstaple section.

At the top are your available aircraft; below the selected aircraft you can change its weapon load-out (if there’s more than one option), its camouflage paint scheme (if there’s more than one option), and stuff like the gun targeting distance (if you can be bothered). Don’t worry about those for now. To the right is the map over which you’ll be fighting, with the fighter and bomber spawn points highlighted. I wouldn’t worry about that too much either, we’ll just point ourselves in the vague direction of the enemy and hope.

Pick which aircraft you want to start off with; I don’t think there’s any difference other than cosmetics between the Fury Mk I, Fury Mk II and Nimrod (naval version of the Fury). Click “To Battle” in the bottom right corner, and after a countdown it’s chocks away and time to deliver the bacon! (Except you don’t have to worry about the chocks, as you start in the air in Arcade mode rather than having to take off). 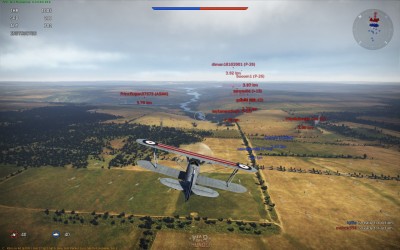 Grab your egg and fours and let’s get the bacon delivered!

Advanced Tactical Combat Summary: red dots on the ground are enemy vehicles/emplacements (shoot them). Red dots in the sky are enemy aircraft (shoot them). Blue dots are friendly (don’t shoot them). Keep shooting red things until either (i) all the red stuff is gone or (ii) you explode. If (i), congratulations, you win! If (ii) you return to the aircraft selection screen; pick your next plane, hit “Select” again, and return to the fray! Repeat until either (i), or all your aircraft have exploded. There’s probably a flowchart in there somewhere, but I reckon you should be able to just about get the hang of things.

After your first battle you get a nice present: a new free aeroplane!

Do you feel the power of the Gladiator?

Let’s put it into service, and buy ourself something new while we’re there. Click the “Research” button in the bottom left corner of the screen; this takes you to the tech tree for your nation, all the lovely stuff you’ll (eventually) be able to fly: 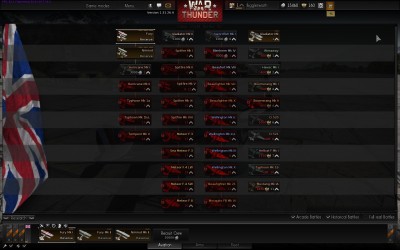 Have a browse of what’s available; the right hand column are premium aircraft, purchased with real money Golden Eagles, the rest you can buy with Silver Lions (the Lion/Eagle icon under the name of the aircraft shows the type of currency). The number in the bottom right, next to the silver chevron, is the rank you need to be to fly them; you gain XP from battles, and what do experience points make? Prizes! Also, air force ranks. Premium aircraft are exempt from this requirement, and conveniently our free plane, Tuck’s Gladiator (at the top of the right hand column, the gold border indicates we own it already) is a premium aircraft, so even at the dizzying height of Rank 0 we can equip this awesome Rank 1 beast. Click on it, and select the right hand icon over the top, “Put Into Service”, replacing one of the starter aircraft.

We can buy another new plane while we’re here, the Rank 0 Swordfish Mk I, the venerable Stringbag. Click “Order”, and put it into service replacing another starter aircraft. The Swordfish isn’t really ideal for early battles as it carries a torpedo, not much use against armoured cars (apart from making a nice ‘clang!’ sound if it bounces off them), and naval targets don’t turn up for a little while, but it does have a rear gunner, controlled by the AI by default; the AI isn’t a very good shot, though, so if an enemy gets behind you, take control of the gun yourself by pressing F6. When you do the plane will continue flying straight and level, so make sure you’re in a nice open bit of sky and not, say, at tree-top level with a big old mountain straight ahead. Wave the mouse around to control the gun, and give that bandit on your tail what-for.

With the new planes in service, hit “To Battle” again, and repeat the whole “shoot the red things” process. After (I think) three battles, you should unlock another country: 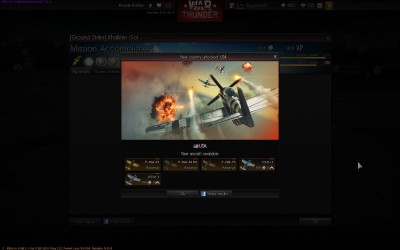 I like to be in America, everything free in America. Except the OS2U, that costs 500 Lions.

That should get you through your first few sessions, see Part 2 for an introduction to the two main Arcade battle modes.