With all the shenannigans going on here in England, I’ve been glad for the opportunity to take respite from all the violence, destruction, and thick-skulled orcish types, and ensconce myself somewhere comparatively pleasant, such as the Valley of Death, Doom and Darkness deep within the fiery trenches of inner Mordor. There I sat down with Gandalf and discussed the situation over in Actual Earth as compared to that in the Middle one. Gandalf listened patiently, nodded sagely, and then asked whether we had a Rohirrim that might be used to charge the ne’er-do-wells, proffering his own successes with such a tactic as evidence for its merit. It certainly warranted further consideration. Then, conversation over, he asked me if I’d clear out an infestation of orcs in the basement of Moria.

That’s often the lot of adventurers in Lord of the Rings Online: generally considered by most NPCs to be executors of extreme pest control. You can imagine NPCs putting their feet up at night in front of the television

This week on Extreme Pest Control…

.
Geoff the Lore-master clears a termite infestation from this front porch using the flame of Anor [Cut to bloke in a dress running away from a house and diving over a hedgerow as the entire front of the house explodes outwards in a fireball]

.
Frank demonstrates his technique for clearing moles [Cut to mole. Cut to mole’s point of view which sees a maniacially grinning dwarf swinging a huge two-handed hammer overhand towards the camera. Cut to horrified old lady standing next to a cratered lawn]

.
And Colin the Runekeeper shows us how to remove a wasp infestation from your loft [An elf fires lightning from his hands up into the loft. There’s a short pause, whereupon thousands of wasps tumble out of the loft hatch, along with several bats, a large charred bird and a singed and smoking cat. A child cries ‘Mr Tiddles!’ at which point the elf makes a run for it]

Middle Earth gets all the best television shows.

Sometimes though I do have to wonder whether this isn’t all some sort of Walter Mitty fantasy on the part of my character, and they are in fact an everyday pest controller who likes to pass the time by imagining they’re an adventuring hero.

[A lady in modern attire stands at the door to a basement in a city apartment. Suddenly a fully armoured knight pops his head up from the basement with a look of sympathy on his face]

It’s orcs I’m afraid. Big ol’ nest down there; I’ll need to gather a band of stalwart adventurers, then spend a year and a day slaughtering the invading forces using weapons forged in the Heart of Fire.

Rats. Good. And when you say ‘I’ll need to gather a band of stalwart adventurers’…

I’ll need to go and grab Kev from the van.

Hmmm. And ‘spend a year and a day slaughtering the invading forces using weapons forged in the Heart of Fire’..?

Put some traps down with a bit of cheese, and come back in a week.

I will need to collect their entrails, eyes and the like, and store them in my bank vault in case a random stranger wants them in exchange for gold.

And by that you mean?

That I will need to collect their entrails, eyes and the like, and store them in my bank vault in case a random stranger wants them in exchange for gold.

Get out of my house.

There’s no doubt that the pests of Middle Earth are relentless, and this is no more blatant to a player than when running around grinding deeds in low level areas, where no sooner have you cleared out an infestation than you turn around and find they’re back again, scratching at the walls and chewing on the mithril power lines. Perhaps Middle Earth just needs better sanitation, a theory which is only strengthened by the fact that so many of these pests transmit disease on contact with claw or fang.

And why can’t we have an infestation of koalas or sloths for once?

It all seems a bit Ghostbusters in MMOs these days, with your merry band of heroes trying to hide –behind flashy gear and winning smiles– the fact that it’s not much more than a supernatural-pest control unit. Only with less of the ‘girlfriends turning into dogs’ thing.

Meanwhile I’m back to work on the Captain; having got the Warden as far as I felt necessary, I suddenly found myself with the completionist urge on my original level 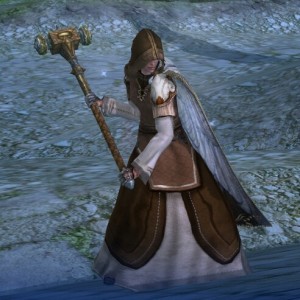 sixty five. Seeing as the Captain is the character I’ve played in the Monday night static group for the past two or more years, you’d think she’d be pretty complete already, but alas the Warden has always had my favour outside of our once-per-week group gatherings. So there’s much to do, but most of it is a grind, and this reminded me why I usually end up creating a new character rather than slogging away at incremental upgrades at the level cap. Still, because there’s so much to do, I can at least work on different things each night and keep it slightly fresher than it might otherwise be. Setting small goals rather than focussing on the large final achievement gives the equivalent of that trickled sense of progress that so appeals to me when levelling a character. Primarily though, much to my shame, the main reason I found new enjoyment in playing my Captain was that I created a new outfit for her. Having seen someone wearing the Robe of Leisure I was reminded of my beloved Warrior Priest in Warhammer Online. The Captain is analogous to the Warrior Priest, both being melee-based hybrid healer sorts, and so I switched to my Jasper Conran spec. and created an ensemble that tips the hat of fashion towards my old Warhammer Online character. The first stage involved purchasing a Robe of Leisure and having my Warden craft a splendid Second Age two-handed hammer. Everything after that was simply detailing. It’s nice to have goals again, and with Isengard around the corner, LotRO looks set to remain the game I turn to when all else quiet for some time to come.