My first thought on seeing ArenaNet’s reveal of the Sylvari 2.0 – Now with 50% more foliage!, was that they certainly passed the international standard cosplay checklist:

So yes, it’s all looking good on the cosplay front. And back. But mainly the front. Must be those bioluminescent nipple tattoos.

Reading a bit of background to the Sylvari, it seems that ArenaNet are trying to present a race which is a little bit alien, a little bit fae, a foundation usually filled by elves in traditional fantasy RPGs. Sadly few designers have managed to portray elves as anything more than an aloof sect of infinitely skilled disdainful know-it-alls. An elf race should give the opportunity to really explore that gulf which experience provides, that juxtaposition of a human-like being with the alien nature of one who has witnessed countless centuries, but it rarely seems to be expressed in games other than through that cunning narrative device of an arched eyebrow and a slightly condescending tone of voice. ArenaNet have branched off from this approach, taking the alien nature and layering it on to a budding young race, one that is inexperienced, although not naive. The Sylvari connection to The Dream will surely resonate with anyone who has enjoyed White Wolf’s Changeling: The Dreaming, and the second Sylvari design keystone of ‘curiosity’ can only help play to this fae feeling. Again though, as with the comparison to elves, the Sylvari differ from the fae in that they are a young race, and therefore there isn’t the unwieldy baggage of a millennia of complex history to weigh the players down as they travel through the world. There’s certainly plenty to like about this race, and more than enough to differentiate it substantially from the other races the game provides; much as I felt about the Undead in World of Warcraft, there’s something about the Sylvari that seems to set them apart from the other warring races. Although the other races in World of Warcraft and Guild Wars 2 all have a look and feel that differentiates them from one another, they still feel as though they come from the same basic stock, whereas the Undead and Sylvari have that slightly unknowable quality to them. 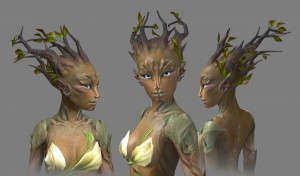 As for the physical design of the race, well we’re on the second edition [probably should avoid book metaphors, tree people may find books slightly offensive – Ed.], and it’s always going to be a subjective issue. In my view I think they still haven’t gone far enough towards the alien end of the scale, but it’s always going to be difficult to tell from a select number of screenshots. Certainly our friend to the left with the tree branch hair is approaching that level, whereas the one below right is definitely ticking all the boxes on the Foxy Chick With Leaf Hair cosplay checklist. Again though, there may well be variety in the character creation so that both options 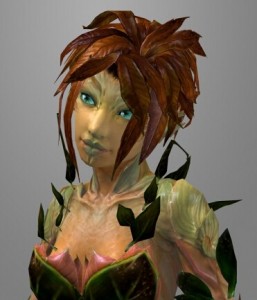 are viable, and there will almost certainly be people who like the ideals of the Sylvari, but to whom a strange alien appearance doesn’t appeal. Not to mention it’s a tricky scale on which to balance: at one end you have the Poison Ivy look, which is essentially a Playboy model with green lipstick and body suit, and at the other end you have World of Warcraft’s druid Tree of Life form, certainly a far more alien sentient plant design, but perhaps far less appealing to the majority of players. So I imagine ArenaNet’s Kristen Perry slid up and down this scale (having seen pictures of the inside of ArenaNet’s studio, I wouldn’t put it past them to have created a giant fun-park scale which everyone could slide up and down on tea trays) trying to balance a requirement for alien humanoid flora against a desire to still present an attractive aesthetic design; it’s a design brief where I imagine H.R. Giger would have had a field day.

Certainly the current Sylvari incarnation is an improvement over the original design, and it manages to find a place on the design scale that avoids the horrors of both Tree of Life Form in a Bikini and Naked Human Wrapped in Stinging Nettles, something for which I’m sure cosplayers and cosplay admirers everywhere will be grateful.