If my friends are a much higher level than I am then, barring the few exceptions that prove the rule, I must rush through content to catch up with them.

When you rush through content in an MMO, all the little annoyances caused by those gates and obstacles that are designed to slow you down, keep you playing and corral your adventuring, are magnified a hundred fold.

Tiger Ears has been documenting our recent foray back into the world of Warcraft, where we have decided to take one last look at the lands of Azeroth from the perspective of a character at the correct level for the content, before Blizzard performs its latest party trick of whipping away the table cloth of original content, leaving the cutlery of players untouched but now standing on the shiny and polished table surface of new content.

Our initial expedition went well enough, I was determined to get a Hunter to the level cap having tried several times and failed for some seemingly unknowable reason that to this day still eludes me. The Hunter is a class that should be effortless and joyful to play, with a pet that can tank and which you can heal, combined with the not inconsiderable damage you both can put out, it’s a class that is definitely overpowered for solo play. As such I actually found it a little dull. It’s my own fault to some extent, I quickly wrote a macro that performed the major cycle of commands that are undertaken every fight – Hunter’s Mark, Pet Attack, Sting, Arcane Shot, Arcane Shot, Sting, and bake in an oven at 180 degrees Celcius for twenty five minutes or until the target is a nice golden colour – and bound it to one key. So thereafter my every fight went R, R, R, R, R, R, R, R, R (I use the ESDF keys to move, so R is my default attack key). The problem for your average player of the class comes from going from that mode of play into the style of play required for a group, which transforms from pressing R a lot into the more freeform style of Hunter’s Mark. Pet Attack. Patrol! Freezing Trap! Wrong target! Pet Change Targets! Noooo not that other group of mobs! Come Back Pet! Argh, Get It Off Me! Disengage! Into Another Patrol! Crap! Heal Pet! Too late! Run away! Run away! Run away!

I really did have the ‘running away’ down to a fine art.

Ok, so admittedly I had tried to jump my skill level from ‘Press R’ up to ‘Tank multiple mobs, CC others, Heal pet, Do some damage, Compose poetry, Solve world hunger’ and that’s probably stretching my skill level a bit, doable no doubt (although I’m not entirely confident about the poetry), but expertise was required in multiple areas, most of which I hadn’t practised at because I was too busy out there in there world, running around and ‘R’ing entire zones to death whilst reading a good book. One can certainly see how the Hunter class quickly gained a poor reputation in the early days of WoW based on this experience. That and the obvious fact that they won G*ld Farmer Monthly’s Editor’s Choice Award for five years running. The fact of the matter is that, when in a group or undertaking quest tasks that would make other grown classes weep, the Hunter is actually a class that requires a high level of skill and understanding to play well.

Having suffered a bit at the hands of the endlessly refilling population of the Stormwind Stockades (I like to imagine it’s where they put all the chat spammers), we decided that a more traditional Tank/Healer combination would work better for the pair of us, enabling us to visit the various dungeons of Azeroth with far less trauma, each of us filling in our more familiar group roles, he of tank and me of healer. It turned out to be a fortuitous time to re-roll because around the same time a couple of Tiger Ears’ readers had ventured forth and asked whether we had room in our little nostalgia troop for a few more. The more the merrier, I say, and so on Wednesday night we had our first weekly static group run. 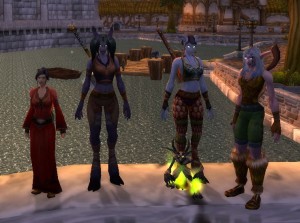 We all got our new characters to level six such that we were out of the very initial starter areas, our characters had just started to lose that new character smell and were run-in enough that we could rev them all the way up to 60 XP per second without the XP bar exploding and leaving us with an expensive repair bill from the local service centre. We met in Stormwind, made the customary introductions, ‘how do you dos’ and ‘wtf do we do nows’, before our glorious leader made a positive decision and we set off to Goldshire to grab some quests on route to giving Hogger a damn good thrashing. This is where the point of our sojourn started to stab at us a little more soundly: almost everyone who has played Alliance, and many who are Horde for Life, will know of Hogger because he’s one of the earliest points in the game where you get to meet an elite mob. He’s a notorious gnoll who lives in the same area as a pack of lesser gnolls and is only really distinguishable by the fact that his character model is slightly larger than the others. All sorts of DANGER! and BEWARE OF THE GNOLL! signs pop up in your tooltip when you hold your mouse cursor over him, however. Many an unwary adventurer has fallen to him, and his reputation is such that new characters will test their mettle against him, and in fact whole forty man raids formed entirely of level one characters have gone up against him. He’s one of those infamous icons of WoW, they’re not the ones you’ll see on box art and in glossy magazine articles, but everyone who has ever played the game with any conviction will know about them. I have one Horde character at level sixty, but at heart I am a player of Alliance characters, and yet I still know all about Mankrik’s wife. If you have invested any time in WoW at all, how can you not?

And here’s the thing: these icons may soon no longer be. In the forthcoming cataclysmed world of Azeroth, Hogger might no longer exist. I may have bested him for the last time – and best him our little group did, multiple times, and once more around the block for another besting – and you know what, it felt great. It felt like it did the first time we organised a group to go and tackle him back on launch day. Curiously though, I was suddenly made aware of the actual Hogger again. I realised that he had become this dull and lifeless entity, so many times beaten and then forgotten that his memory had become more fearsome than he ever was. I could have drawn a fair approximation of what he looked like, drawn a map for you as to his rough patrol area, described his ability to stun and his uncanny knack of sneaking up on you while you were fighting a pack of normal gnolls, but all this was substituted for the real experience. Even if Hogger exists in the next expansion for World of Warcraft he won’t be the same. If the character model and abilities remain unchanged, he won’t be the same. He is part of the world, and changing the world that he exists in changes him. It’s the same for Mankrik’s wife. I imagine that the WoW developers, having their finger on the pulse of pop culture and never ones to shy away from self-reference, will now hide Mankrik somewhere. There will be a whole new generation of “Where’s Mankrik?” and for a while it will be genuine and funny, because nobody will no where he is. Where is Mankrik’s wife, though? In your mind, if you’ve ever quested for her, you know she’s in a camp with a couple of tents. What do those tents look like, what pattern do they have on their exterior? The camp is near a bridge, what is that bridge made from? If you stand in the camp and look south, what do you see? How about to the east? If you can’t remember, or the memory is vague, and you are a fan of World of Warcraft, go and have a look. Remind yourself, because soon it will be gone.

This is the reason for our return to the lands of Azeroth: to cement people and places in our mind’s eye, to remember the great feats and greater falls, and to pay our last respects to this land as we know it, a land that has given millions of players many years of entertainment.