I keep meaning to blog about Champions Online, but then end up playing it instead. I’m really enjoying it at the moment, but then I can’t think of an MMOG that hasn’t been good for at least a couple of weeks, so we’ll have to see how it lasts. One thing that I think could really work in its favour long term is the server-less-ness; though Guild Wars has had a similar model for years, almost all other games have suffered from the problem of getting stuck on a different server, or indeed continent, from people you might want to group up with. Reinforcing the social side, Cryptic have already got some impressive out-of-game elements in place; OK, so the “constantly spam Twitter until all my followers bugger off” aspect of the /socialmedia option might be a little misplaced, but logging in to the Champions homepage you’re presented with your friends list together with their status, and the ability to add friends to that list, very handy for seeing if people are around without having to load up the game. (Unfortunately once in game the friends list has a slightly annoying habit of vanishing, but I’m sure they’re working on that.)

Tip of the hat to Sente as well, who noticed a “My Characters” option on the page, which sure enough takes you to a list of your characters with lots of profile options, so I don’t even have to go back into the game to get a couple of character pictures: 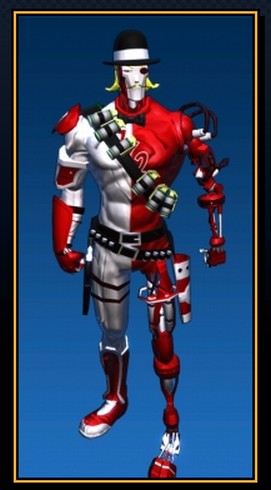 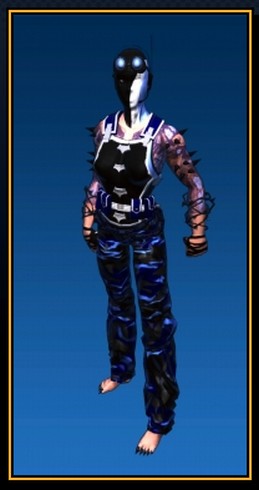 On the left: Eric the Half a Bot, inspired entirely by a Python song title and the fact that you can have different options on the left and right hand side of your character. He wields two pistols and two swords and has lightning reflexes, which I think you’ll agree entirely naturally follows on from having half his limbs replaced. On the right: Tombstone Blue, inspired entirely by a Dylan song title. At least, it would be Tombstone Blue if that was allowed as a name, but I guess there’s a de-Marvel-ifier working behind the scenes objecting to “Tombstone”, so I need to come up with something else.

Another social aspect is the Guild, or Supergroup; without traditional servers, it would’ve been really nice to see a new approach to guilds, perhaps with your global identity able to be associated with multiple groups of interest, but it seems that Champions uses the normal one character, one supergroup approach, at least for now. Me n’ Melmoth have hooked up with Rock, Paper, Spandex, which should be fun.

Speaking of things Rock and Paper-y, Jim Rossignol is putting up a beautiful series of Eve articles, a retrospective of his corp (parts one and two available so far), and according to the latest RPS Electric Wireless Show (no. 27) his book “This Gaming Life” will soon be available in paperback, so that’s one for the Christmas list.

Day forty two. Still stuck in the character creator. Johannson has abandoned us and struck out on his own. I fear that Smedley-Brown will leave next, and then I don’t know what I shall do; I was going to kill and eat him so that I didn’t have to leave our base camp to fetch food. On a brighter note I have completed my Automata clone:

He will sit nicely alongside my Stupendous Man, along with all the others.

As I write this, Smedley-Brown is leaving. I’m alone now. All alone. Like that man in Silent Running with all his robot pets.

Oh, now that would make a great character.