It’s been a quiet time on the gaming front, sticking with the old favourites. War Thunder thunders along, as it’s wont to do; a recent update introduced radar, missiles and increasingly modern tanks, areas I’m not particularly interested in, but that’s not a problem as I can still happily potter about in World War II era boats and aircraft. I wandered in to the open beta of The Division 2 and, in a shocking turn of events, found it a lot like The Division. I had a good run in the original but didn’t get very heavily drawn into its endgame, in general I prefer the more fluid first-person combat of Destiny 2 to cover-based third-person shooting, so decided not to pick up TD2 just yet. I might grab it if there’s a good offer at some stage and/or a gaming void opens up, but there’s no danger of that at the moment. I bought Far Cry 5 in a Steam sale of some sort; it seems fine, a good old Ubi map-mopper, but an FPS with a map full of things to tick off isn’t exactly a dramatic break if I’m looking for a change so I haven’t been in there much, it’s Destiny 2 that’s ticking along. They seem to have struck a sweet spot in combat: plenty of easy-to-mow-down minions that are still threatening en masse, a smattering of more powerful mobs, plus the big old boss fights. The Division 2 still seemed to favour fewer, tougher mobs which (for me) feels less psychologically satisfying even if the end result of time taken and XP/loot/etc received is the same (similarly there’s more of a disconnect when standard humans require massive volumes of fire to bring down, even if a game isn’t striving for any great realism, whereas any fule kno that space aliens with laser shields can absorb a whole load of shooting). The various weapon types of Destiny 2 all seem to have their place; I mostly settle into a comfortable groove of pulse rifle, shotgun, and machine gun, but in the course of levelling up or for specific tasks I’ll switch in bows, hand cannons or whatever for slightly different fighting styles. The variety of activities, PvE and PvP, solo and group, also keeps things fresh enough that I don’t feel too caught in a groove of “run exactly the same mission twice a week plus matinee”. It’s my battered old armchair of choice at the moment.

Though playing enough I’m pretty disengaged from gaming more widely, as is doubtless obvious from the infrequency of posts here; Zubon’s farewell struck more chords than Status Quo (all four of them). Past April Fool’s Days veered between irritation at swathes of not-particularly-funny stuff and appreciation for some decent jokes, especially when developers went so far as to tweak game content. I hardly keep up with gaming news these days, though, so barely saw anything this year; I’m not sure if there was as much as usual, or if the world decided there’s no point making fake headlines when “Mussolini’s granddaughter kicks off at Jim Carrey over joke about hanging fascists” is real. Destiny 2 didn’t seem to have anything notably foolhardy, leaving it down to War Thunder to make sure I didn’t miss out entirely. Gaijin deployed Earth Thunder, players doing battle in flying saucers capable of flying, hovering just above ground, and diving under the sea. 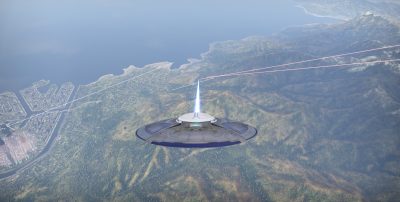 Quite fun, though the weapons seemed a bit hit-and-miss (mehhh). I still think the high watermark was the World War II Walkers of 2015, shame that nothing more seems to have happened with them.