After last year’s Giant Snail Attack, Gaijin added a couple of events to War Thunder on April 1st this year. Firstly “Unrealistic Battles”, with everyone flolloping around in tanks reminiscent of the inflatable decoy vehicles used in World War II, gun barrels bouncing in a mildly disturbing manner. Instead of firing dangerous explosive shells the tanks lobbed vegetables at each other, able to load potatoes or carrots; in a not-so-subtle dig at World of Tanks they also had health bars.

I’ve got a bike, you can ride it if you like

A fun gag, but a couple of battles were enough to get the joke, it wasn’t a mode I’d spend a great deal of time playing. The modellers have a commendable eye for detail, though; activating the X-ray style module viewer uncovered the bicycle powerplant of the vehicles, and close inspection revealed the gunner standing in the turret with a slingshot and a bucket of potatoes as his ammunition supply.

The second item, “March to Victory”, was teased beforehand with a mysterious silhouette on the War Thunder Facebook page. A Development Diary blog post fleshed out the (alternate) history of the ST-1 walking tank:

In the game itself, a special event gave players a line-up of regular tanks and planes plus the ST-1 (or, for the Germans and Americans, the captured/evaluation version, the former thankfully not called “wanzers“). Using a point-based system everyone had to start out in tanks, but by securing objectives and getting kills then enough points could be earned to spawn a walker: 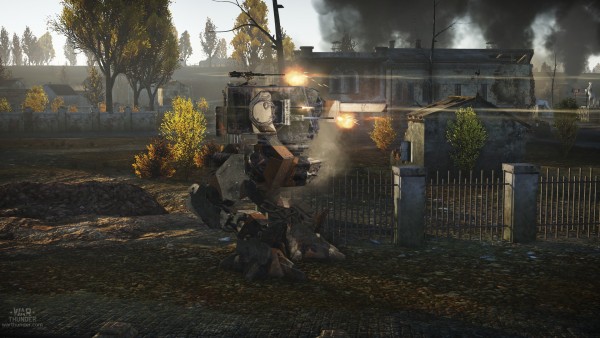 I keep the ends out for the tie that binds

The walkers were fantastic, very dieselpunk/Weird War II, garnering considerable interest in more permanent availability. I’d certainly love to see them put in another appearance, perhaps even (in the distant future) as the basis of a whole spin-off game, but just opening up the March to Victory event now and again or allowing players to set it up as a custom battle would be good.

All the old paintings on the tombs they do the sand dance, don’t you know?