With the massive popularity of Minecraft producing a generation of budding geologists, Geoscience Australia have released a poster pointing out that not all the game mechanics translate directly to real life. “Gold” for example “is very soft, nearly as soft as fingernails, and so is not useful for pickaxes or armour.” Furthermore “Putting cobblestone into a furnace will not create stone. It would, in fact, achieve nothing but a very warm rock.”

This seems like a fine way of introducing real subjects and clearing up misconceptions, and there must be other opportunities out there. The Army, for example, could mention to keen fans of the Gears of War series thinking of enlisting that “Not all gunfights happen in areas conveniently provided with numerous bullet proof chest-high obstacles.” Meanwhile the General Medical Council, in response to Every FPS Ever, may like to remind people that “Gunshot wounds require dedicated medical treatment, simply standing on an unopened first aid kit is not sufficient. You’ll only squash the tube of Savlon.” Over on mobile devices, the Meat and Livestock Comission could clarify for Angry Birds players that “Pigs are foraging animals, primarily eating leaves, grasses, roots, fruits, and flowers. They rarely band together to steal bird eggs. Furthermore the primary defensive mechanisms of birds are flapping or pecking, rather than firing birds from a catapult that break up into smaller birds, knocking down wooden structures causing heavy objects to fall upon pigs in the process.”

The National Association of Tanners and Leatherworkers may be the busiest, though, thanks to the crafting system of Far Cry 3. They’d need an extra large poster to cover everything: “Producing usable leather from an animal carcass is a more involved process than sort of waving a knife around for a few seconds.” “A pouch made from Komodo Dragon Skin can hold any item small enough to fit inside it, not just grenades.” “The amount of money you can fit into a wallet is a function of the size of the wallet and the denominations of banknotes in question, not whether the wallet is made of Cassowary Leather or Shark Skin.” “Even we, a bunch of people who turn dead animals into useful stuff, think it’s a bit nuts to slaughter every living thing within a seven mile radius just to carry ammunition in bizarrely specific containers. What’s wrong with a nice nylon rucksack, for heaven’s sake?”

After last year’s Giant Snail Attack, Gaijin added a couple of events to War Thunder on April 1st this year. Firstly “Unrealistic Battles”, with everyone flolloping around in tanks reminiscent of the inflatable decoy vehicles used in World War II, gun barrels bouncing in a mildly disturbing manner. Instead of firing dangerous explosive shells the tanks lobbed vegetables at each other, able to load potatoes or carrots; in a not-so-subtle dig at World of Tanks they also had health bars. 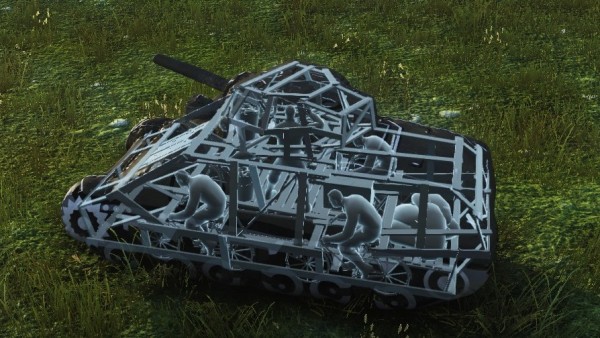 I’ve got a bike, you can ride it if you like

A fun gag, but a couple of battles were enough to get the joke, it wasn’t a mode I’d spend a great deal of time playing. The modellers have a commendable eye for detail, though; activating the X-ray style module viewer uncovered the bicycle powerplant of the vehicles, and close inspection revealed the gunner standing in the turret with a slingshot and a bucket of potatoes as his ammunition supply.

The second item, “March to Victory”, was teased beforehand with a mysterious silhouette on the War Thunder Facebook page. A Development Diary blog post fleshed out the (alternate) history of the ST-1 walking tank: 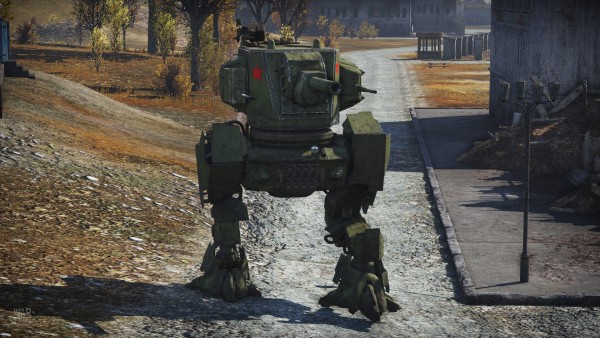 In the game itself, a special event gave players a line-up of regular tanks and planes plus the ST-1 (or, for the Germans and Americans, the captured/evaluation version, the former thankfully not called “wanzers“). Using a point-based system everyone had to start out in tanks, but by securing objectives and getting kills then enough points could be earned to spawn a walker:

I keep the ends out for the tie that binds

The walkers were fantastic, very dieselpunk/Weird War II, garnering considerable interest in more permanent availability. I’d certainly love to see them put in another appearance, perhaps even (in the distant future) as the basis of a whole spin-off game, but just opening up the March to Victory event now and again or allowing players to set it up as a custom battle would be good. 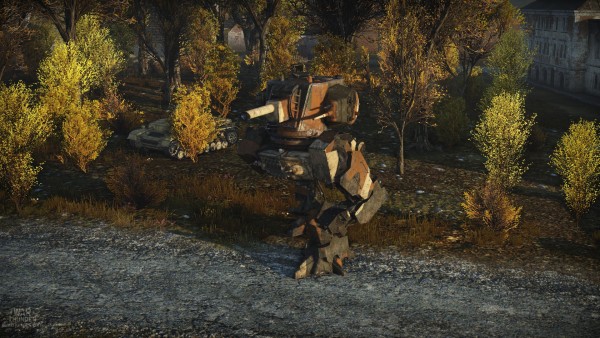 All the old paintings on the tombs they do the sand dance, don’t you know?