On the ground, US tanks are now out of closed beta and available for everybody to research, in case you have a hankering to re-enact Fury, and there are a smattering of new tanks for all three nations, most notably including the super-heavy Panzer VIII Maus. Continuing the ginormo-trend in the air, 1.47 brings the B-29 Superfortress, with the heaviest bombloads yet seen in the game. Slightly disappointingly there are no new British aircraft, but the word is that a whole Fleet Air Army tree is on the way, hopefully in 1.49. Another new arrival is the Focke-Wulf Fw 200 Condor, Scourge of the Atlantic: 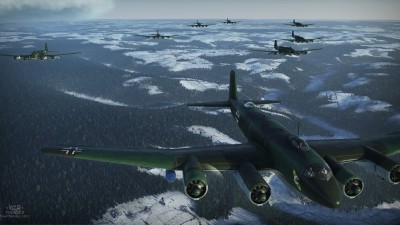 There’s the usual plethora of tweaks to various flight models, new decals, contrail effects, binoculars for tankers and such, full details on the website as ever, and one more fairly significant change, perhaps most immediately obvious when you first log in…

Until this update, your first victory each day with each nation would get a 2x multiplier to research rewards, a welcome boost, especially in the high tiers as things rather slowed down. War Thunder now has a daily reward scheme, similar to many other free-to-play titles:

Each day you log in you receive a crate containing tantalising and exotic rewards (or, on Day 1, in most cases a small boost to research or currency earnings for a few matches). With this being less than the previous 100% boost per country, obviously people are reacting very calmly to the new system and not launching into froth-spackled diatribes prophesying doom, because this is the internet and everyone is very calm and relaxed, so that’s nice. Similar to the switch from unlocking whole tiers of aircraft to individually researching them it does look like this will, overall, slow down research to some extent, but there are potentially advantages as well, particularly if you prefer to focus on a single country, and there are some interesting aspects, like team boosts that apply to everybody you fly with. Certainly something to keep an eye on, to see what might be in that oh-so-shiny looking Day 6 crate if nothing else, though it does mean that War Thunder now has a Start to Crate time of zero.

Along with the daily rewards, you can buy more crates (using “real money” golden eagles) in an item shop with a random chance of various rewards including boosters, or a tank or plane. I’m not really a fan of these real money lockbox/crates, but they seem to be becoming ubiquitous. Ah well, I’ll save my money, and maybe go spin the roulette wheel of Kickstarter again instead…