Despite my doom-laden forecast of overloaded servers it seems that last weekend’s Golden Battles in War Thunder went without a hitch, so I guess Gaijin have beefed up their infrastructure a bit, perhaps in readiness for unleashing clanking steel beasts. Sure enough, today has seen Update 1.41 released, bringing a few new planes (including three more Griffon Spitfires, hurrah!) and, perhaps most significantly, moving Ground Forces into Open Beta, making tanks available to all players. 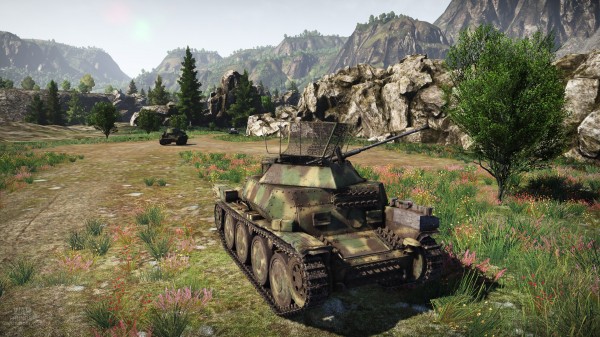 Any progress from Closed Beta has been wiped, but according to Gaijin that’s now it, no more progress wipes. Just for the moment Arcade Battles seem to be tank-only, presumably to let people get used to things and research a few vehicles before unleashing hordes of Stukas and Sturmoviks, but you can set up a Custom Mission if you’d like to test out combined arms operations with some friends.

If anyone is after an extra early tank, this month’s PC Gamer magazine in the UK (it has Civilization: Beyond Earth on the cover) comes with a code to unlock the Aufklärungspanzer 38(t), as pictured above, a German reconnaissance tank with a 20mm gun that should be quite useful for taking pot-shots at aircraft as well.