Towards the end of last year I completed a bunch of challenges in War Thunder that gave a chance of participating in the ground forces closed beta, and the other week the Hand of Fate had a good old rummage in the Metaphorical Top Hat of Beta Entry Raffle Tickets and drew out beige 172, that’s number 172 on a sort-of-beige, sort-of-light-brown ticket, corresponding to my account, so I get to play with tanks, hurrah!

I haven’t had much of a chance so far, the beta server isn’t up all the time, but I did get to bimble around a bit this weekend. The Ground Forces NDA has been partially lifted, participants can talk about the beta and post content as long as they don’t focus on bugs and negative aspects. Some people seized on “don’t publish negative remarks” as a totalitarian attempt to whitewash opinion, “All War Thunder doubleplusgood. Ground forces beta ungood? Crimethink! Send to joycamp.” To me, though, it seems a reasonable enough approach, acknowledging the voracious appetite for information from some quarters that would be fed by leaks anyway, while trying to balance the actual testing aspects of a genuine beta with consequent rough edges.

So the first thing that strikes you is that it’s terribly pretty. There’ve been plenty of screenshots and videos showcasing how good the tanks look, and they don’t disappoint when you open up your garage. Here’s a King Tiger, complete with Zimmerit coating:

If the tanks seem a little plain, you have access to the same decal system that aircraft have, allowing for further decorations such as kill markings, unit insignia, or a spot of anthropomorphising. This is Gerald the ISU122, he’s a little bit grumpy: 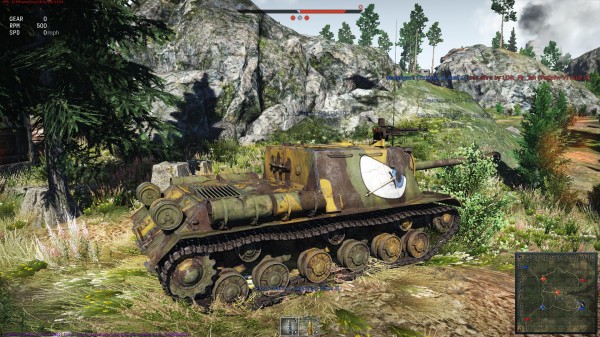 Here’s looking at you, kid

General gameplay is broadly similar tank combat in other games: drive around with WASD, point turret at things with mouse, click button to fire gun. Initial matches were mostly spent getting to grips with controls and such, it’s far too early for a definitive opinion, but it all seems fun enough so far. I saw a couple of maps during my beta sessions, both Domination-style with three control points. With both sides having a plentiful supply of respawning reinforcements in Arcade mode, the few battles I was in all ended via points being captured rather than one side being wiped out.

Capturing a point in an IS2

As with aircraft, damage is based on hit location and equipment modules rather than hitpoints. I managed to get a flanking shot on a Tiger II, the red text on the right shows the damage caused:

One of the things I’m particularly interested in is the interaction between aircraft and tanks when the two can play together. One of the maps I saw was tank-only, but the other also featured airfields for combined arms gameplay, so I took a few planes out for a spin: 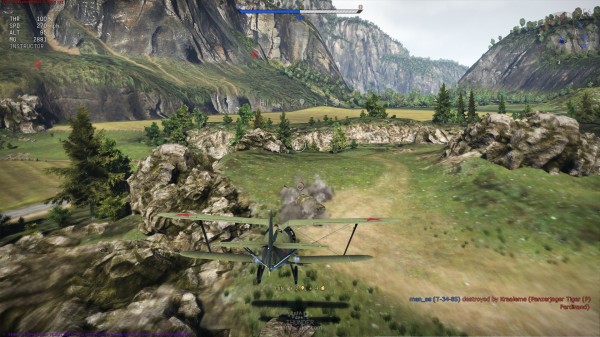 The only aircraft available were the reserve biplanes with an armament consisting of a couple of light machine guns and (if sufficiently upgraded) two very small bombs, not a threat to the high-tier tanks being tested, more of a novelty than a serious attack option. It did give an idea of how combined forces might play, though. One challenge is finding a target; the tanks on your own team helpfully have name labels to avoid friendly fire incidents, but there’s no highlighting of enemy tanks, you need to get right down at low altitude to spot them yourself. It’s rather fun swooping around, looking for movement, knowing the tanks down below are other players rather than AI targets, but in doing that you open yourself up to a number of hazards. Enemy aircraft are always a danger, if you get too focused on ground targets then you’re easy prey for opposition fighters. There are also AI anti-aircraft units dotted around the map, though friendly tanks can sort those out:

Tanks aren’t defenceless against aircraft, in Arcade mode you get a lead indicator to help with targeting enemy air units:

By all accounts air kills are possible with large calibre guns if the shooter is lucky/skilled enough, I lofted a couple of 88mm shells in the general direction of enemy planes, but the Elefant tank destroyer isn’t really designed for anti-air work. There weren’t any dedicated AA vehicles available during this particular test, I figured the 20mm autocannon of the Panzer II might be quite effective against aircraft:

Needless to say, though, every time I took it out for a drive the skies suddenly cleared, so I didn’t bring any aircraft down with it.

A wider range of aircraft will mix things up a bit more, obviously heavier bombs, rockets and cannons will pose far more of a threat to ground vehicles, but I don’t think planes will have things all their own way. It’s going to be rather interesting to see how it all develops.