Speaking of character creation and customisation, here’s my female dwarf in DDO. 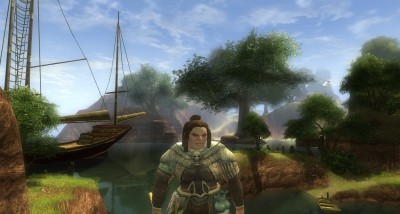 Beauty, as they say, is often in the eye of the beholder. 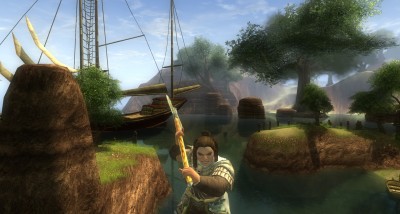 Thankfully Beauty carries a big axe, so she should be able to cut her way out again.

Now we just have to see how long it takes before the re-roll.

Once more the sinusoidal wave of my gaming activity seems to be fast Fourier transforming into the domain of peak enthusiasm. Gaming groups seem to have sprung up spontaneously in this new year for both Star Trek Online and Dungeons and Dragons Online, like overeager daffodils launching forth from the soil in anticipation of the efflorescence which accompanies Spring’s lusty renewal. Hopefully it is not too early a re-emergence – not just the product of an unseasonable thawing of frostiness towards the MMO Winter. Even SWTOR is getting another chance at fertilising the furrows of my imagination, with a small static group forming in order to work through the content at a more sedate pace than the traditional MMO levelling cycle demands; a bit less ‘Evel Knievel attempting to jump the Grand Canyon’ with all the requisite hanging on for dear life, bugs in teeth, legs flying out behind you like a Chinese dragon; a bit more ‘cycle holiday in the south of France’ with frequent stops in verdant fields for a nice bit of crusty French stick, some Brie, and a good glass of rich red.

It’s not all been frolicking freewheeling down dell and dale, however. Having recently placed my feet in the stirrups of character creation, swung myself up onto the back of the DDO, and been unceremoniously flung to the ground several times before I’ve even managed to fully grab the reins, I’ve found myself yet again admiring the way that Skyrim handles character creation and development. I suppose it’s a somewhat similar situation to that which Tobold describes with his party of players, who are coming to both new characters and new rule set for their pen and paper role-playing confabulation. It seems to make an awful lot of sense to have a player pick cosmetic choices such as race and sex (I always pass on the racing, but am most definitely pro-sex) and then launch them into the game. Character development in these cases generally comes from the player’s natural inclinations towards certain aspects of the class system. If the player favours a sword and shield, then their skill in both becomes greater, and thus they slowly develop their character based upon how they choose to play. It’s a much more organic system, with the character growing along the path of least resistance, which runs parallel with the path of player preference.

Of course I say the initial cosmetic choices are simple, but, for me, a mid-level re-roll can easily occur when I’ve had enough time with the character to realise that I picked the wrong beard option. Or that I should have gone for eyebrow shade number two, instead of number four. I mean, it’s obvious now, in this light, and with my crafted armour, but back when I was young and reckless and carefree, eyebrow shade number two seemed like the sexy choice! It was easy, good looking, and fun, at a time when I didn’t even realise there was the potential for an optimal eyebrow shade … ah those salad days when our judgement is so much the greener!

My approach to character creation in a game like DDO is almost Lovecraftian, starting with puppy-like exuberance, followed later by abject terror, and concluding with a not inconsiderable level of knee-hugging insanity. Creating a character in such a game is like building a house, where you get three quarters of the way through construction only to realise that you’ve plumbed-in a toilet next to the refrigerator in the kitchen – a convenient and possibly intriguing combination, but generally not the Done Thing, for a multitude of reasons. The problem, I find, is all the distractions along

the way, where you start out with a solid goal, a perfect concept of the character you want to play, and then as you start to build that character you notice other features which could conceivably be included into the build. It’s as though you’re trying to put together a jigsaw, but you keep noticing other pieces from different jigsaws which look really nice. So you try to fit those pieces into your jigsaw, rearranging the old jigsaw by taking pieces out, or making extra holes in otherwise perfectly good pieces, or just pushing the pieces against one another and then thumping them with the bottom of your fist until they fit. Eventually you take a step back from your frantic fabrication and realise that your initial, perfectly sensible, character jigsaw has been deformed into some hideous amalgam of parts, with what you thought was a nose actually turning out to be half a knee, along with the melancholic creeping realisation that your character either has five pimply buttocks or you’ve misappropriated and misaligned several breast pieces quite badly.

So it’s back to the drawing board with a determination to stick to a core concept; to focus, damn it, focus! I’m just going to play a Fighter. That’s IT. Perhaps… perhaps with a little specialisation in one of the prestige enhancements. Kensai looks nice. Ooo, but that gives a bonus to a Monk’s Ki regeneration, so maybe a splash of Monk. But of course I’ll need the Whirlwind Steel Strike feat to make my longswords class as Monk weapons…

Three or four hours later, your design for a half-elf Fighter 8/Monk 2/Bard 6/Ranger 3/Wizard 1 is just about ready to be deleted so that you can stop arsing around and get down to creating a workable character. Damn it!