It’s a wonder, word-friend that I am, that I haven’t tried Lord of the Rings Online’s Runekeeper class in earnest before now. One of the first spells that they get, Fiery Ridicule, has a description which in part reads ‘The ridicule a Runekeeper writes hurts more than a mundane scribe’s ever could’. Blowing-up evil doers through the power of the written word? Sign me up! It’s not quite the realisation of my dream to create Shakespeare Man, the masked hero who fights crime using his supernatural ability to make things explode by quoting pithily at them, but it’s pretty close.

“Wastrel!” he’d shout, and the camera would pan to a low, wide-angle shot from behind Shakespeare Man, looking upwards as the top floor of a skyscraper explodes in the very best Die Hard fashion, erupting shattered glass and office supplies across several neighbouring buildings.

“Lasciviousness!” he cries through a low spinning crouch, finishing with his accusatory arm pointing to the head of a murderous pimp whose head promptly implodes.

“Fie!” he spits frothily in the grandest of thespian traditions, as a shockwave levels every building in a five mile radius.

It’s not a lot different to playing a Runekeeper, to be honest. If I were to choose a sentence to describe the Runekeeper it would be this:

“Listen, and understand! That Runekeeper is out there! It can’t be bargained with. It can’t be reasoned with. It doesn’t feel pity, or remorse, or fear. And it absolutely will not stop, ever, until you are dead.”

Honestly, all you need to imagine is that any Runekeeper player’s screen is tinged red and has a Terminator-esque targeting icon with small scrolling lines of text in the corner which identify any potential objects worthy of elimination, and you have a pretty good idea of what it’s like playing the class.

I’m saying, in a none-too-subtle way, that the class is overpowered; I don’t think this is a Bad Thing.

There’s a simple joy to playing a class which, compared to the classes that you’re used to playing – in my case the Champion and to a lesser extent the Warden – is utterly and ridiculously more powerful. I mean, laugh out loud, I think I just found God Mode, I hope I don’t get banned for exploiting, powerful. The reason for this is that the realisation of how powerful you are is dramatically affected by what you have to compare it to. In the grand tradition of Slashdot car analogies: hand the keys to an Aston Martin DBS to any teenager who loves cars but hasn’t driven before and let them loose on a racetrack and they will know that the car is powerful, they will feel the power through the g-forces that are experienced during acceleration, deceleration and cornering, but they will not truly appreciate the car in the same way that someone who has been forced to drive a small 1.1 litre hatchback for five years would. There’s nothing wrong with having an overpowered class, as long as you make sure that your players have experienced your 1.1 litre hatchbacks first.

The Runekeeper is pretty much your glass cannon hybrid mage class. Where the Warden (the other class released as part of the Mines of Moria expansion) experimented successfully with a very innovative combat system, the Runekeeper sticks to the more tried and tested seesaw balance method of game play where the player chooses to either do damage at the expense of healing or vice versa. Being restricted to light armour only, the Runekeeper is weak when confronted by multiple mobs in melee, but through careful play this hardly ever occurs and when it does the Runekeeper has various stuns and snares to enable them to get back to range and finish any aggressors off. Against a single target of even level the Runekeeper can dish out enough damage from range that by the time the mob has managed to get into melee range it will have time for one or two hits before it is defeated. I like the way this works, not just from the feeling of power that it instils in me, but because I’m always intensely annoyed by the design that has become common in MMOs whereby cloth/light armour classes are forced to tank mobs who are armed with great axes and swords and the like. It’s not an easy problem to solve because allowing ranged characters to keep melee mobs at range means that the caster will rarely take damage. You could balance this by making your caster classes need to stop and rest after combat to regain mana, but down-time is rapidly becoming an unacceptable means of prolonging game-play in the mind of the modern MMO player. Giving glass cannon classes low hit points and armour and then a whole bunch of tools that allow them to effectively tank mobs anyway seems a bit of a cop-out to me, though.

Another advantage to the Runekeeper being placed firmly in the ‘Can’t Tank Mobs’ school of magic and mayhem is that they aren’t called on to melee much, which is very good considering they fight by using two small stones held in their clenched fists to punch their enemies, a curious style that I’d expect to find being adopted by drunken oafs in the car park of my local pub on a Friday night than by intellectual word-wizards in Turbine’s carefully crafted fantasy world.

A benefit to the Runekeeper’s ability to make things transform very quickly into a fine red mist is that I quickly realised that I am now the bane of crap animals everywhere. Wherever I run in Middle Earth there’s always a bunch of conveniently placed crap animals ready to aggro at the slightest opportunity; with the Runekeeper it’s so much easier to turn around and, with a stern look, convert them into steaming piles of sausage meat, rather than run limping halfway across Middle Earth with them nipping at your heels, being generally ineffective, annoying and crap.

Having chosen dwarf for the race of my Runekeeper I’ve once again launched myself through the dwarven starter area and am happy to report that the bugs that I have mentioned previously seem to have been sorted out, and the experience is better than ever. Quests have been further streamlined to remove a lot of the travelling chores of yore, and further new features have been added, such as a travel point at Noglond, a mini quest hub between Thorin’s Gate and Gondamon which was always a bit tedious to have to run to repeatedly. The only negative to all of this is that because the process is so smooth and painless now I’ve found myself at level twenty in short order, not a problem in itself, but I find now that I tend to out-level the initial curve for the Apprentice tier of my gathering profession in most cases; it’s not a huge issue, but perhaps something that the developers might want to consider if they’re still in the habit of tweaking the starter areas. The reduced back-and-forth is a huge boon to a player levelling an alt, but it also means that you spend less time wandering around the wilds and tripping over gathering nodes for your chosen profession. However, it may be that anyone interested enough in crafting won’t mind going out on expeditions just to find these nodes, and it certainly rewards the player by having them explore and experience the game’s wondrous landscapes whilst at the same time fulfilling a purpose. As I said before: not a huge problem, and this is only based upon my experience of the dwarven starter area – other starter areas may well be fine – and the gathering curve quickly matches back up with the levelling curve once you get into the next tier of gatherables.

Finally a thank you: a huge THANK you to the Turbine developers for the two cosmetic outfits that they provide for players to customise the look of their characters without affecting their stats. It means the difference between a character that looks splendid, like this: 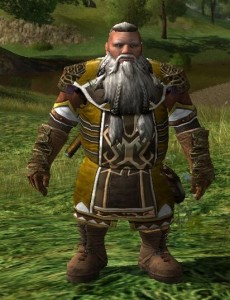 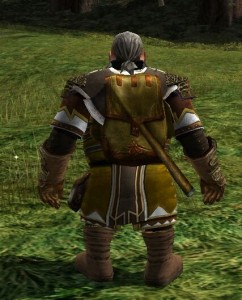 and looking like Brian Blessed’s beard became a face-hugging sentient alien life form and attacked the first Oompa-Loompa that it happened across, like this: 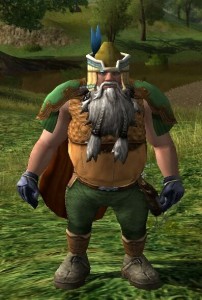 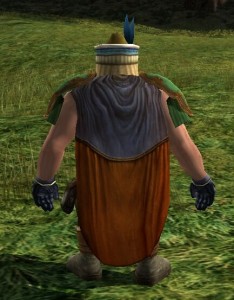 Call me picky, call me a Social player, call me Susan if you must, but I would not be playing this character if I’d had to spend more than a few seconds each session staring at that abomination of a so-called default costume, an outfit so bizarre that it makes my character look as though he was dressed by being forcibly shoved into a colour-blind clown’s rainbow-eating tumble dryer and seeing which random items of statically-charged clothing stuck to his hairy body.

Your mighty blow has defeated the Default Costume.

6 thoughts on “Verse is not written, it is bled; Out of the poet’s abstract head.”