Part 1 got us into our first battle, Part 2 covered the main mission types and Part 3 the aircraft types, in Part 4 we’ll look at upgrading aircraft so they are, in the words of Oscar Wilde, “well blinged up innit?”

When you buy a new plane you might think you’re getting a shiny factory-fresh model in tip-top condition, but I’m afraid that’s not the case; as a rookie you’re assigned a battered old thing that’s had several not-so-careful owners. At least that’s the excuse for why you need to gain experience and spend money to knock out the dents and service the engine…

After a battle, you might see an aeroplane icon on the results screen with a message along the lines of “New modification for Hurricane Mk II: Offensive 7.7mm belts”, indicating there’s an upgrade available for that plane; if you quit a battle before it’s over, the message might appear on the next results screen you see, so it won’t necessarily relate to the aircraft you were just flying. 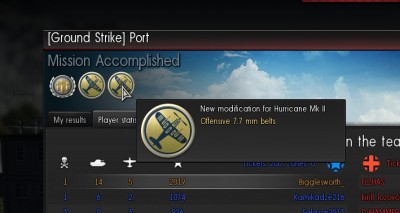 To access the upgrade screen click the “Weapons” icon with three bullets, it should have a pulsating gold background if new options are available:

That should bring up the upgrades:

The precise options vary from plane to plane; the Hurricane Mk II just has one set of machine guns, other fighters can have weapons of two or three different calibres with separate upgrade options, bombers tend to have turrets, like the Blenheim Mk IV here: 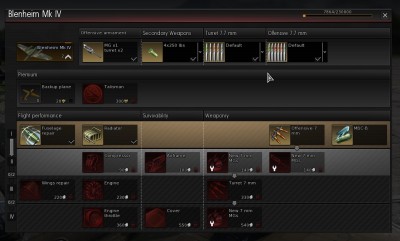 Across the top of the screen we have the weapons: Offensive Armament (standard guns), Secondary Weapons (bombs, rockets, torpedoes, gun pods), and then the ammunition load of guns and/or turrets. For a brand new plane, you won’t be able to change any of these.

I wouldn’t worry about the two Premium options, purchased with Golden Eagles. “Backup plane” allows you to use the aircraft twice in an Arcade battle, potentially handy if you have a particular favourite but by no means essential. “Talisman” gives an experience bonus for the aircraft, worth considering in the higher ranks, but not so vital at lower levels when experience comes quickly.

Underneath those are the upgrades that are unlocked as you gain experience with the aircraft, four tiers grouped into Flight Performance, Survivability and Weaponry. These upgrades can be bought with silver lions (earned in-game) after you unlock them, but if you really can’t wait you can purchase locked upgrades with gold lions (real money). Hover your mouse over a locked upgrade and a box will show the XP required to unlock it, a “Buy” icon underneath will show the cost in gold lions to immediately purchase it.

The first two groups allow your plane to fulfil the Olympian ideals of Faster, Higher, Stronger. As the names suggests Flight Performance upgrades to components like the radiator and compressor improve the performance of the aircraft in flight, Survivability options improve your chances of surviving a battle (though really quite marginally, you get a slightly stronger and lighter airframe rather than super-adamantium armour). To see precise details, hover the mouse over an upgrade:

In this example cleaning and tuning the radiator increases maximum speed by 4mph and climb rate by 0.1m/s; it’s unlikely you’ll notice a massive difference in a fight, especially in Arcade battles, don’t be too worried about upgraded opponents having an insurmountable advantage, but every little helps. The cumulative effects of a full set of upgrades is more noticeable in Historical and Full Real battles.

Ammunition unlocks tend to be the first weapon upgrade option, “Offensive 7mm” in the above screenshots. Once purchased you can ditch the boring Default ammunition and switch to something crazy like All High Explosive Incendiary Tracer, All The Time (note: not actual name).

Pylons allow you to fit secondary weapons to the aircraft. Most bombers start with a single default bombload, pylon upgrades allow them to carry more or heavier bombs, or alternative secondary weapons like torpedoes. The Blenheim Mk IV starts with 4x250lb bombs, with the MBC-B pylon upgrade it can carry 2x500lb bombs instead:

Some fighters only have guns, others have pylon upgrades for a fighter/bomber role; the Hurricane Mk II can carry 2x250lb bombs with the HSBC mk.2 upgrade, or 6xRP-6 rockets with the HRC mk.8. Some German aircraft have also recently gained the option to fit additional cannon as secondary weapons, as per Rüstsätze (field modifications), so the range of options are getting wider.

Once you’ve unlocked new secondary weapons or ammunition belts you can fit them to the aircraft using the drop-down arrows in the bar at the top of the upgrade screen. Note that upgrades are a one-off cost but you have to purchase non-default secondary weapons and ammunition with silver lions each time you use them. Don’t worry too much, though, they’re not particularly expensive, and even if you go on a crazy spending spree and have no money left at all, you can always equip the default options for free.

The types of ammunition available will depend on the weapon calibre and country selected. If you want to see the exact contents of an ammunition belt hover your mouse over it, in this case the British Universal 7.7mm belt: 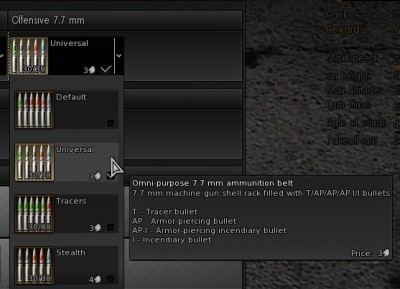 Once I’ve got ammunition unlocked I tend to use Universal/Omni-purpose; it’s an improvement over the Default ammunition (the Default 7.7mm belts include Ball rounds, just plain chunks of metal, fine for making small holes in stuff but not very exciting compared to an Amour Piercing Incendiary round), and suitable for both air and ground targets. I haven’t found any particularly good discussions of the relative merits of other ammunition loads, feel free to experiment.

For a bomber you might have a few choices of bombload; the Su-2, for example, can carry 12 x 50kg bombs, or 6 x 100kg, or 2 x 250kg once you’ve unlocked the pylon upgrades. Though, as per the old maxim, quantity has a quality all its own, I tend towards the other maxim that bigger is better. If you can get nicely lined up on a road packed with a column of vehicles it can be glorious to drop a long string of bombs down it, but irritatingly the enemy are seldom generous enough to lay out their forces in nice, geometric, easily bombable patterns. Small bombs (50kg/100lb) have to be very precisely placed, they do little splash damage, larger bombs give you a bit more leeway, particularly useful if you’re intending to bomb from altitude, and some targets need heavy ordnance to destroy them.

After you’ve kitted yourself out with new weapons and ammunition on the upgrade screen, you can change the load of your plane before going into battle. Here’s a spawn screen at the start of a match with our newly upgraded Blenheim: 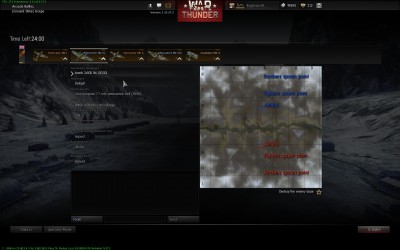 Under Secondary Weapons we can choose 2x500lb bombs instead of the default 4x250lb bombs, and we can change the Default shell racks to Omni-purpose. Don’t worry too much about the other settings for now.

Once you have a bit of a feel for different maps and game types, you can tweak which plane you start with and its weapon load. In a Ground Strike battle you might want to start off in a fighter-bomber, head for the nearest ground targets, rattle off a few rockets or bombs, then look out for any friendly bombers who might need an escort; alternatively you could start out in a pure fighter, skip the secondary weapons for optimum performance, and climb up to high altitude in case an enemy heavy bomber is lurking up there going for your airfield. In a Domination battle you could start in your lowest rank fighter and have a crack at capturing the closest airfield (lowest rank so it isn’t too great a loss if you misjudge the approach and crash a bit), or pick a bomber, head for the enemy airfield as fast as possible and hope to catch one or two of the capturing team on the ground.

So that covers trivial things like the weapons load of your plane, Part 5 covers a far more important feature: painting your aircraft, along with a general wrap-up of crew skills, premium options and the like.

Good news for War Thunder, as part of the Steam Greenlight programme it’s been released on the digital distribution behemoth. Good news for players too, as a number of DLC packs are available on Steam with a 25% discount until August 19th.

I’m still thoroughly enjoying the rather splendid World War II flying fun of War Thunder; I’m not completely convinced by the revised upgrade system added recently in patch 1.33 with four tiers of individual components, resulting in a more significant difference between a newly purchased plane and a fully upgraded one, but it’s a fairly minor annoyance in the grand scheme of things.

If you’re at all tempted to grab your eggs and fours and get some bacon delivered, my complete beginner’s guide might come in handy (though I need to update part 3 to reflect the new upgrade system), and if you get into it then the Ace Advanced Pack is well worth buying for two nice premium aircraft, two months of premium account time and a nice stash of golden eagles. You can even buy a couple of packs, if you’re really keen, the premium account time stacks up; just be a bit careful about putting high level premium planes into service, you’ll get put into higher level matches, and that’s not so fun if the rest of your hanger is full of biplanes!