Father Christmas arrives a week early for keen War Thunderers, with Patch 1.37 today bringing a veritable sack-load of new goodies: new planes, new maps, new flight models, DirectX 11 support, and perhaps most noticeably a major change in the research system. Previously you had a rank for each country, each plane had a rank, and achieving a new rank in an air force unlocked all the planes of that rank. This system had several good points, but a few disadvantages; progression could be a bit uneven as a new rank might not unlock planes of your preferred type (the US tree had a particularly bad Fighter Gap pre-v1.33 between the rank 13 P-51 Mustang and rank 18 F-80 Shooting Star, only partially filled by a couple of F8F Bearcat variants at ranks 15 and 16), or even any planes at all. In 1.37 you pick one aircraft at a time to research per country, a little more like World of Tanks, but with some key differences.

Aircraft are now grouped into five Eras instead of twenty Ranks, broadly chronologically but with a few tweaks to reflect their performance. These eras are also used for matchmaking, but with slightly fuzzy edges and player performance factored in, so a mid-late Era II plane with a good pilot might well be grouped with an early Era III plane with a poorer pilot. Here’s the first four Eras of the new British tree:

To unlock a new Era, you have to research a number of planes of the previous era. At the very left of the screen you can see “2/4” under the “II”: I’ve researched two Era II planes (the Hurricane Mk II and Spitfire Mk I), and need to research two more to move on to Era III, so I couldn’t immediately research the Era III Beaufighter Mk X after the Mk VIc. Premium planes count towards this number, though, so if I finish researching the Beaufighter VIc and buy a Boomerang Mk I or D.520, that will allow me to move on.

To unlock a specific plane, you’ll need to have researched the previous plane in its line (connected via an arrow). In this example I haven’t started on the Wellington bombers yet, to research the Mk Ic/L, I’ll have to first research the Mk Ic. Some planes are “stacked”, like the Spitfire Mk II (clicking on it will reveal two variants, the Mk IIa and Mk IIb). You need to research them separately, but you don’t need to unlock them all to progress to the next aircraft in the line (the Spitfire Mk V in this case).

Individual module research on each aircraft has also been tweaked slightly so that you research a particular module, rather than modules automatically unlocking according to a predefined sequence previously. You can select the module to research in the usual Upgrade screen, if you complete that research in a battle, you’ll get a pop-up afterwards letting you know, and allowing you to select the next module to research: 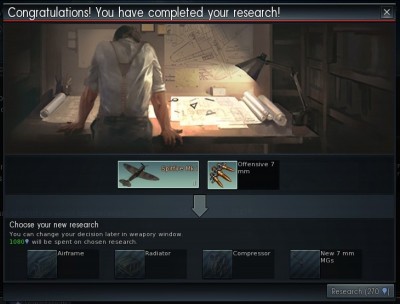 The general consensus seems to be that the new system may be slightly quicker for advancing all the way through one specific line of planes, but quite a bit slower for researching everything; a lot depends on the rate at which Research Points (“RP”, the replacement for XP in the new system) are awarded, which could well be tweaked a few times as the system beds in. There’s a Developer Diary that goes into a bit more detail, it looks like victory for a team will be a major factor in the number of RP received, which could be a positive factor in encouraging good teamwork, or equally terribly frustrating if you perform magnificently but lose a match due to a team full of buffoons. So much the same as ever, really!

When it was announced that Star Wars: The Old Republic would be getting free-flight PvP space combat, my interest was piqued; being a fan of the old X-Wing series, and having spent most of my brief Star Wars Galaxies tenure jumping to lightspeed, I thought I might as well resubscribe to be first in line for starfighter access. And for free hats. Mostly the hats, to tell the truth.

I’ve only dabbled a little in space fighting since the update arrived, and I’m not sure I’ll be throwing myself into it in a big way. It all seems nice enough, you have a variety of ships, can tinker with the crew and the fittings, level up various aspects of their abilities, but the actual flying-around-and-shooting side hasn’t really grabbed me. I think I’ve been spoiled by War Thunder, which uses a “virtual instructor” so all you have to do is point the mouse in the vague direction you want to fly, and the instructor accordingly adjusts the elevator, rudder, ailerons, elevons, upperons, downerons and any other control surfaces that happen to be kicking around; once you’re pointing the right way, the camera aligns, and you’re flying straight and level. It’s a brilliantly intuitive and easy system; I was showing the game to Van Hemlock, lined him up a Spitfire for a test flight, and with minimal instruction (“press shift to go fast!”) he took off, flew around, shot up a practise target and landed, without crashing. Galactic Starfighter, like a lot of other flying/space combat games, uses more of a mouse-as-joystick approach: move the mouse left and your ship goes left until you move the mouse back to the middle of the screen, a scheme that needs a bit more practise to get to grips with.

Needing practise, it would be a nice if you were thrown into battle with fellow novices so you could all bumble around together, with your wingman struggling to put his starfighter into gear while you accidentally turn on the windscreen wipers instead of firing your blasters. With a phased approach to release (subscribers having access now, ‘preferred’ players getting access on January 14th and completely free access from February 4th), it seems that the pool of potential pilots is too small for any matchmaking niceties like taking account of player performance or ship upgrades, and most rounds I’ve played so far have been dramatic mismatches differing only in whether the Imperial forces disconsolately hang around one of the three control points for an inevitable but prolonged loss, or just get camped on their spawn point.

At this point I could knuckle down and jolly well harden the ruddy heck up, keep on plugging away and gradually improving, or… not bother. And with War Thunder and World of Warplanes available to scratch the dogfighting itch, not to mention space games like Star Conflict if gravity and an atmosphere is too much of a drag, Option 2 looks rather tempting.

Though the space combat itself hasn’t been terribly inspiring so far, Galactic Starfighter has got me back into SWTOR more generally. I’ve been on an MMO-break for a fair while, but seeing as I’d subscribed again I thought I might as well have a look at the expansion, Rise of the Hutt Cartel, that added a new planet and raised the level cap. It was rather fun to dust off my Imperial Agent and chat to the old crew again, but upon landing and actually getting into combat it was the familiar old problem of having four hotbars of random icons to get to grips with again. Fortuitously the FRR posse were just piling in, a fine opportunity to roll a new character and get back into the swing of things, and it’s been most splendid rampaging around the place and discussing the quantum state of Schrödinger’s Black Talon Captain with others.

I may still try the odd starfighter flight, then, as a bit of downtime between quests and flashpoints; perhaps once preferred players have access there’ll be a brief flurry of newcomers I might have half a chance against, while the even-more-seasoned-by-then veterans enjoy a Happy Time in a potentially extreme case of free(ish) players being content for subscribers, unless the matchmaking system keeps them apart. As part of the wider whole of SWTOR it’s nice to have options alongside the main story, the PvE on-rails flying the game launched with, conventional PvP battlegrounds, flashpoints, operations etc., but I’m not sure Galactic Starfighter is really strong enough to pull people into the game by itself, especially with dedicated projects like Elite: Dangerous and Star Citizen inching towards playability. Still, the beauty of free-to-play is that you give it a try yourself from February without any financial outlay.

Badadadadada dum dum dum dadada daa daaa dum dum daaaaaaaaa! It’s been almost two years, but Hat News Now Today is back, today, now! Our correspondent is still in The Old Republic, and received four packages in the mail for the launch of the Galactic Starfighter update, containing…

A good start; a sound base of flying helmet (textbook), a dash of Stormtrooper, a pinch of Cold War gasmask and just a soupçon of gimp. Equally at home in the cockpit of an Imperial starfighter during a fierce dogfight or hanging around the fleet station bar trying to work out where to pour a drink.

What is it about the Republic and orange? Really, guys, 1993 called, it wants its bold colour blocking back. Oh, hang on, not 1993, we’re in… what… 3953 BBY? So… 3973 called? And it wants to know how it’s possible to use a chronological system based on the Battle of Yavin that won’t happen for thousands of years. And also how time travelling phones work.

Does my face look bovvered? Does it? Oh, it does. Yes, well, so would yours under this monstrous carbuncle. The Republic don’t do terribly well out of the Starfighter headgear; about the only thing you can say in favour of this one is that the peak/visor thing doubles as a handy can opener, so if your starship crashes on a deserted planet you’ll be able to get into the tinned food in the emergency supply kit. 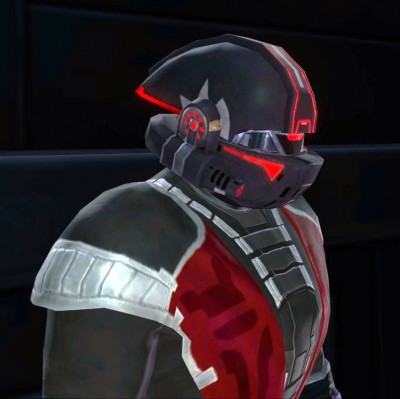 The second Imperial helmet, and my personal favourite. Hints of the original TIE pilot’s helmet (via some timey-wimey inspiration, as previously mentioned they won’t be around for a few thousand years), but with the help of Darth Bradley Wiggins it offers an optimum aerodynamic profile when riding a speeder.