Badadadadada dum dum dum dadada daa daaa dum dum daaaaaaaaa! It’s been almost two years, but Hat News Now Today is back, today, now! Our correspondent is still in The Old Republic, and received four packages in the mail for the launch of the Galactic Starfighter update, containing… 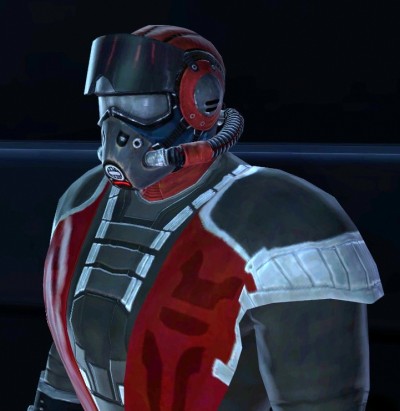 A good start; a sound base of flying helmet (textbook), a dash of Stormtrooper, a pinch of Cold War gasmask and just a soupçon of gimp. Equally at home in the cockpit of an Imperial starfighter during a fierce dogfight or hanging around the fleet station bar trying to work out where to pour a drink.

What is it about the Republic and orange? Really, guys, 1993 called, it wants its bold colour blocking back. Oh, hang on, not 1993, we’re in… what… 3953 BBY? So… 3973 called? And it wants to know how it’s possible to use a chronological system based on the Battle of Yavin that won’t happen for thousands of years. And also how time travelling phones work.

Does my face look bovvered? Does it? Oh, it does. Yes, well, so would yours under this monstrous carbuncle. The Republic don’t do terribly well out of the Starfighter headgear; about the only thing you can say in favour of this one is that the peak/visor thing doubles as a handy can opener, so if your starship crashes on a deserted planet you’ll be able to get into the tinned food in the emergency supply kit.

The second Imperial helmet, and my personal favourite. Hints of the original TIE pilot’s helmet (via some timey-wimey inspiration, as previously mentioned they won’t be around for a few thousand years), but with the help of Darth Bradley Wiggins it offers an optimum aerodynamic profile when riding a speeder.