Just in time for Christmas, Gaijin have unleashed Update 1.45 for War Thunder. The main addition is American tanks, joining their German and Soviet armoured brethren in the Ground Forces part of the game, but there are also a few new aircraft, maps and assorted tweaks; full details in the patch notes. One of the new features is tow ropes for tanks, allowing you to rescue unfortunate team-mates who’ve ended up on their sides; to avoid griefing a tow has to be both offered and accepted, and you can only target friendly vehicles, but there must be potential for some future tug-of-war type game modes…

Oh, and the hangers have been spruced up a little for the festive season as well: 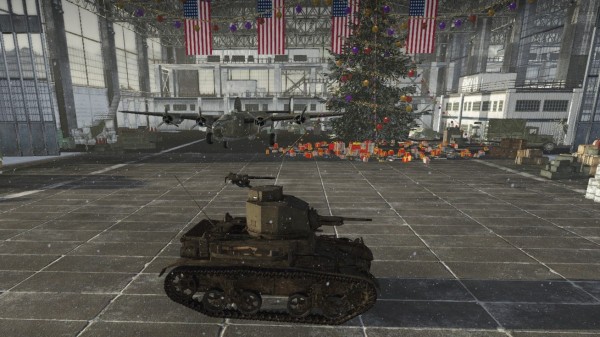 You’ve got to hand it to Valve, and by “it” I mean “lorry loads of small denomination coins”. In much the same way that kids have more fun playing with a big cardboard box than the expensive toy that came in it, they presumably concluded that spending ages on stuff like gameplay was completely wasted in Team Fortress 2 compared to the all-important hat market, and have now abandoned conventional games entirely except as a form of currency to power the Steam Event Metagame. Building on this summer’s Five-Way Increase An Arbitrary Number Decision Theory Paradox Event, Valve have finally caved in to the ceaseless demands to make their sales vastly more confusing by allowing trading cards and emoticons and profile backgrounds to be transformed into Gems, a new form of pseudo-currency to use to bid on auctions or alternatively to transform into booster packs for more trading cards. Gems can also bought and sold for real money, alongside the emoticons and hats and games and trading cards and profile backgrounds, in a strange and confusing swirl of gems and money and games and hats and socks and toasters. Only without the socks and toasters. For now. Those will probably come in the Easter sale.

Many years ago, in the dark ages of the last years of the twentieth century, this “internet” thing was starting to catch on but was still largely the domain of tech-enthusiasts navigating a sea of “Under Construction” messages via primitive search engines, not the first port of call if you were after up-to-date news, weather, live sports scores, share prices, TV schedules or recipes to accompany cookery programmes. For those, we had Ceefax and Teletext. Imagine a World Wide Web of 999 pages, squished onto screens of 40×24 characters, accessed by typing in a three digit number and watching the page counter tick, tick, ticking along… A smidge primitive compared to almost instant access to the sum total of all human knowledge (or as close as the ‘net gets to it), but a fine and useful service, and free (as long as your television could display it), an important consideration when ISPs had a monthly fee on top of the cost of phone calls (for you crazy kids who don’t remember the olden days: you used to have to “dial” “up” by getting a lengthy bit of cable and running it from the computer to the telephone socket in the hallway, then you shouted “cssswwsswwswswwwwww WEEEEEEoooooWWEEEEEooooooWEEE ccsssssswwwwwsswwswww”, and hoped nobody would trip over the cable or want to use the phone until you’d finished downloading a Metallica song from Napster).

As well as the aforementioned news, weather etc., there were subtitles on page 888 (turning Top of the Pops into instant karaoke), quizzes like the classic Bamboozle!, even a textual soap opera. Most pertinently, though, there were pages about games. On the BBC, as I recall, rather staid reviews, infrequently updated. On Channel 4, Digitiser, a magnificently anarchic array of madness that was only about games as much as Jaws was a book about a shark. Accompanying the previews, reviews, and hints and tips were a whole cast of regular characters, spoof adverts for German metal albums, Mr T admonishing kids to stay away from his bins and, best of all, nonsensical anti-jokes (Q: What do you call a man with bread and butter pudding on his head? A: Pudding Gentleman Type B!) and incredibly laboured sort-of-puns (Q: What do you call an android adjudicating officer who decorates the sycamores in his garden with girls’ toys? A: Ro-Judge Doll-Tree (Roger Daltrey)!) I had no idea of the ructions behind the scenes, I think I’d drifted away from Teletext in general by the time it finished, but have retained a fondness for blocky cartoon snakes ever since.

Good news, though! Mr Biffo’s back with a whole Twitter of words including Man-tastic jokes, and Digitiser rides again as one of those ocelot-come-lately “pages” on the “web”. The future is uncertain as Biffo & Hairs grapple with both the issues of sustaining a site in an atemporal zone of content production and a greased tramp riding an elk (the elk isn’t really an elk it’s a metaphor for a moose), but even if it’s only a fleeting return of Insincere Dave it’s good to see him back again!!?!?!?!!!!!!!!!