War. War never changes. War Thunder, on the other hand, changes quite a lot when major patches are released, such as the 7GB of Update 1.43 ready to descend upon your intertubes like a Lancaster loaded with Small Bomb Containers, only packed with shiny new game features instead of 20lb Mk IV fragmentation bombs. Update 1.43 brings new aircraft, new armoured vehicles, new game modes, new decals and camouflage, new sounds and new maps, the latter sadly not including New South Wales, New York New York (so good they named it New York) or Newton Abbot to really emphasise the newness.

With tanks being a relatively recent addition, some of the more major changes are around ground forces. Combined arms battles featuring both tanks and aircraft have great potential, but striking a balance between the iron ground beasts and their airborne bombing predators (and the fighters that prey upon those bombers in turn, and self-propelled anti-aircraft units) is quite a challenge. Until this patch, Arcade tank battles didn’t include aircraft at all. In the new mode everyone starts in tanks, and if you earn enough points you get the chance to spawn an attack aircraft or bomber for a very limited time (not one of your own aircraft, from a pre-selected list, with experience you earn on it going towards your tanks). When one player activates that ability there’s a global notification, and other players get the chance to spawn fighters to either escort or attack the bomber. 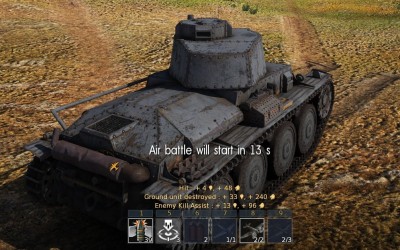 Let’s go fly a bomber, up to the highest… what rhymes with bomber?

It’s an interesting tweak, and certainly gets around one of the main issues with a mixed Arcade mode, the fact that aircraft get to reload bombs in mid-air.

Realistic Battles also now use a points-based system for selecting vehicles. You’re placed in a match depending on the highest Battle Rating (BR) of anything in your garage/hanger, then each vehicle has a cost to spawn with some scaling based on BR (within limits, you can’t get into a match based on a late war King Tiger, then zerg rush a bunch of incredibly cheap tankettes).

Aircraft are more expensive, I believe nobody starts with enough resources to fly, so again you have to earn enough points with your tanks before you can unleash a r(ai/eig)n of aerial terror.

I worry a little that in both cases the team doing well are further rewarded, but the few matches I’ve played so far have worked out fairly well so it should be fun to see how the modes bed in.

Tankers also have a couple of other new toys to play with in this update. When viewing vehicles in the garage you can switch to an armour inspection view, showing the thickness of your protection (matron), or an X-ray mode demonstrating just how exciting it was to be a tank crewman sitting on top of a tank filled with flammable fuel, next to a pile of explosive ammunition: 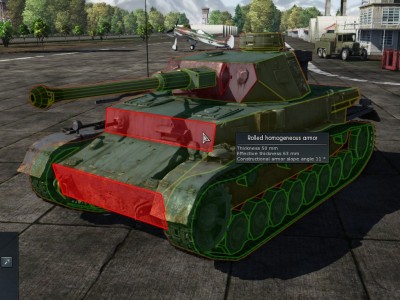 The X-ray view is also used in a new post-destruction replay screen that might forestall a little of the “how on earth did I die then?”, showing the path of the shell that finished you off and the resultant havoc it wreaked, a bit like the slightly gruesome Sniper Elite X-Ray Kill Cam: 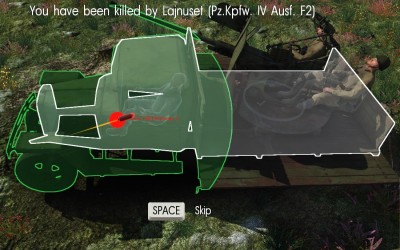 At this point, Driver Geoff began to think it might have been a mistake to mount an anti-aircraft gun on the back of his minicab

An ongoing bone of contention for some players is the matchmaking system, where each plane is assigned a Battle Rating (BR) for matchmaking purposes. These Battle Ratings are adjusted based on player performance, which can result in situations where the aircraft of countries that attract a smaller pool of more dedicated pilots (primarily Germany) receive less favourable matchmaking than the more popular countries (the USA & USSR). It’s not really an issue in the mixed Arcade Battles, but comes to the fore in nation vs nation Historical Battles where the relative popularity and strengths of different types of aircraft are much more of a factor. Historical matchmaking, based on the actual service dates of aircraft, is frequently suggested, but I’m not sure that’s a terribly good idea, what with every country always frantically working to make aerial combat as unfair and unbalanced as they possibly can, with varying degrees of success over the course of the war. Gaijin have acknowledged the issue and announced plans for a fundamental overhaul in the future that will do away with Battle Ratings in Historical Battles, so there aren’t any major changes to that in Update 1.43.

The aerial side of things hasn’t been neglected, though, with every country getting four or five new aircraft (plus eight for Japan, whose tree was a little on the sparse side), and assorted tweaks, updates and corrections to flight models, bomb loads and such.

Together in (English) Electric (Canberra) dreams

There’s a new aerial mode as well, Air Races, if you’re tired of endless destruction; a nice scenic tropical island with a bountiful local harvest of floating yellow rings to fly through:

Automatic squads are another innovation. If you join a battle on your own you’ll be grouped up with another random pilot or (unless you disable the feature in the game options). With some minor additional rewards for scoring kills in the vicinity of squadmates it’s a nice nudge to try and encourage a little more teamwork, though unlikely to have a particularly dramatic effect in general.

All in all, plenty of good stuff to get your teeth into!