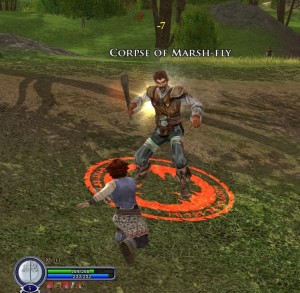 It was while playing around in Lord of the Rings Online the other night with a low level alt that I came across a curious event. I had just killed a marsh-fly when the server decided to have a bit of a wibble (for want of better technical parlance) and when my screen unfroze I found myself being hit upon, which is to say being struck painfully as opposed to being asked down the Prancing Pony for a drink, by Corpse of Marsh-fly, pictured over yonder.

For starters, how cruel must his parents have been for them to call their son Corpse? It probably made for some vaguely comical moments in an otherwise drab and dreary life, sure. “Where’s that Corpse when you need him?”; “I caught that Corpse in some hanky panky with the butcher’s daughter the other day”; “I’m pleased to say Mrs Bride that your young Corpse is as healthy as can be”. Honestly though, it’s a name you might possibly expect to hear from a creature out of the pits of Mordor, but a young ruffian in Archet? Hardly seems fair.

Then comes the second part of his title ‘of Marsh-fly’. Now, my Elf is ‘of Mirkwood’ and my Dwarf is ‘of the Lonely Mountain’, but I’ve travelled around a fair bit and Marsh-fly ain’t no town I’ve ever heard of. They speak Sindarin in Marsh-fly? ‘Welcome to Marsh-fly’ states the sign as you enter the sedate little village, ‘twinned with Bullfrog-Upon-Sea. Population 10,000,000 – Flies, Humans – 6’. So you can see why you wouldn’t want to have a name such as Corpse in a town that ten million flies like to call home, but then perhaps we should pity his brother Dungpile more.

Alas, when I killed Corpse the server seemed to unwibble: I was looking forward to a screenshot capturing the lesser spotted Corpse of Corpse of Marsh-fly, but it wasn’t to be and so ended my encounter with perhaps one of the more interesting characters that I’ve met in LotRO in a while.