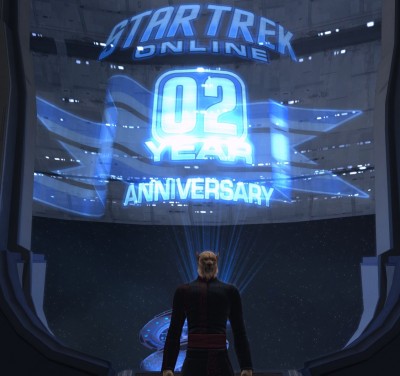 Due to equal opportunity legislation, ‘human billboards’ were renamed to ‘xenomorphic lightshows’ sometime around the year 2409. 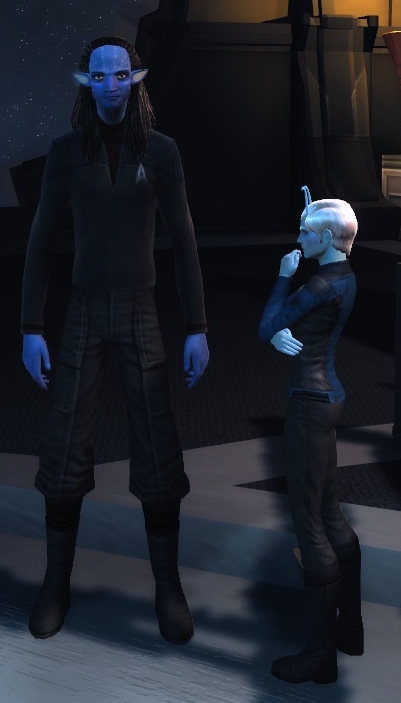 Creating my avatar in Star Trek Online as an Avatar, then hanging around in Ten Forward and watching Trekkies’ heads explode.

Our industry insider has once again infiltrated the inner sanctum of an MMO developer and has sent us here at KiaSA Towers the lowdown on some top secret features that will probably never make it into production. This time its from the Cryptic Studios’ Star Trek Online design board:

Shatner’s Girdle: They just couldn’t find a graphics processor powerful enough to hold all those pixels in such a densely compacted space.

Malfunctioning inertial dampening: No matter how hard they tried to coax their physics engine to do it, it simply refused to throw the player characters in the opposite direction to each other and, more importantly, the ship.

Personal inventory: Have you ever seen a Star Trek officer with pockets?

Alternate (sic) dimensions: They couldn’t run the risk of you running into someone from another version of the game where players didn’t have to grind the same tedious missions over and over. Besides, they’d need to have space on the server to store an entire secondary set of your crew with pointy beards. And the female avatars looked really weird with beards.

Replicators: “One of every top tier epic equipment item in the game, please.”

Expanded range of phaser settings: ‘Oven left on at home‘ setting proved to be overpowered.

Tailoring: an early beta included a crafting skill that allowed players to produce cloth items with a machine on ship, but a number of problems prevented it ever working properly resulting in a slew of bug reports demanding the developers “Make it sew!”

Holodeck: This feature was going to allow players to create their own game content that other players could access through their ship’s holodeck. It was all going well, with various mini-games based upon Westerns, Nazi occupied France and fencing, until someone created a mini-game where your ship’s captain played a gamer who was playing STO on his computer. Alas this ripped a hole in the fabric of the space-time continuum here in the real world, and Cryptic had to send a rerouted tachyon pulse through the game’s central database server in order to close that timeline down and set us off on our current timeline. Alas, in this timeline it appears that Tabula Rasa and Vanguard were utter failures, and Richard Garriot and Brad McQuaid are not the happily married benevolent rulers of Earth that they were.

“Computer”
*beedle*
“Run an analysis on this game’s data and make me a good game based on that data that isn’t entirely reliant on fans of the IP.
*beedle* “Estimated time to completion, three minutes, forty two seconds.”
“Send the result to my PC.”

Voice commands: Unfortunately players would just pick the mouse up and start talking into it, before moving on to shouting ‘Hello!’ in various and progressively louder ways. Alas, it was later discovered that Cryptic’s system ONLY… managed… to … pick up on… STRANGELY… intonated SENtences with pauses… IN… all the… wrong places entirely.

Q: The first raid boss of the game was removed after an exploit was found whereupon he could be easily defeated with a simple script if your starship captain was a small bald Yorkshireman pretending to be a Frenchman. Later, after a fix was issued, a trans-dimensional bug caused him to issue players with weird gadgets like a shoe containing a radio transmitter and a watch that turned into a hedgehog.

Boldly: This was removed from the game when testers found that, due to a bug in the language, no players were able to boldly.