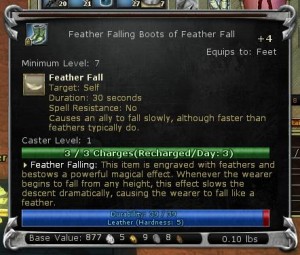 Today’s objet de curiosité was sent in by fellow virtual-world veteran and erstwhile Lord of the Rings Online adventurer Van Hemlock, a gentleman not entirely unfamiliar with the peculiar and puzzling nature of MMOs. This piece of curious clothing comes from Dungeons and Dragons Online, an MMO famous for its many and varied items with Adjective Noun of Verb/Adjective titles that leave little to the imagination as to what the item in question can do; should one stumble upon Invisible Pantaloons of Greater Immodesty, for example, it is immediately obvious to all but the bravest or most foolhardy of adventurers that this is not an item of apparel fit for wearing to the royal masquerade.

And so we come to the Feather Falling Boots of Feather Fall, dubbed by Mr Hemlock as the Redundant Boots of Redundancy. This footwear comes with a permanent Feather Fall enchantment, immensely useful in the world of Eberron where jumping off high places to your otherwise inevitable demise seems to be a regular occurrence, almost as if some greater force were contriving to place adventurers in situations where they would need to Feather Fall or die. But what else can these magnificent boots do? What other mystical powers do they hold over and above their ability to grant the Feather Fall effect at all times, permanently, with no chance of it ever being the case that the wearer of these boots cannot Feather Fall. Would you believe that the clue was in the name?! And would you believe me if I told you that these boots could, in addition to allowing the owner to Feather Fall at will, allow them to expend up to three charges per rest in order to cast the Feather Fall spell on themselves as well!

What crazy old mage decided to create a pair of magical boots that would permanently grant an ability and then give those same boots three charges per rest of the same ability?! I mean, I can imagine it comes as quite a relief to the adventurer who owns said boots as he flings himself off a mountaintop only to find that he doesn’t have any charges of Feather Fall left on them; imagine the panic running through his mind as he realises his mistake too late, and how his life flashes before his eyes, and then it flashes again, and again, and several more times as he very slowly and gently wafts his way down to ground level. It’s not as though Feather Fall is a multiplicative ability, you can imagine Armoured Armour of More Armour working out quite well for a fighter type, but Feather Fall is a binary ability, you are either falling like the proverbial feather or the proverbial stone, you can’t fall more feathery. But what if you could? Say you could cast those charges and slow yourself even more, by how much would you slow down? Feather Fall is a pretty dramatic slowing effect as it is, another dose of Feather Fall on top of that might stop you entirely, but then surely that would make them Not Falling At All Boots of Hovering? And you’ve got three charges, so what happens if you use another charge straight away? Then they become Flying Boots of Vertical Ascent Only. But those charges will eventually wear off, and then you’ll hover/fall depending on how many charges are active at any one moment. Of course with permanent Feather Fall you won’t fall to your death, so essentially you’ve got a set of boots that will let you travel up and down the side of a mountain and hover at various levels – thus Elevator Boots of Multi-story Manoeuvring. Pop a rest shrine at the base of the mountain to allow for convenient recharging of the boots, strap a pair of them onto a bellboy, hop on his back and state your desired floor “Mount Doom, third floor: haberdashery, carpets & rugs, ladies wear, and the forges within the Cracks of Doom”.

As can be seen from the stats of the item, the Average Frock of Volition is also known by its less common name: the Rubbish Frock of Volition; being that volition means ‘the act of willing, choosing, or resolving; exercise of willing; the power of willing; will’, the careful observer will note that the Frock of Liar Liar Pants on Fire has no Willpower stat on it at all, but instead has a considerable boost to Toughness. Now call me Susan if you must, but I don’t remember many Jane Austen characters who wore frocks that boosted their physical damage resistance; they had frocks that boosted Charisma, certainly, and frocks that bestowed dual air bags and emergency floatation devices, but there was very little in the way of frockage designed to arrest axe attacks.

There is, however, one theory on why an Average Frock of Volition would exist:

“That’s bad right? That sounds like it could be bad.”

“And he’s wearing an Average Frock of Volition!”

“Bu.. but, that frock has no Willpower boost on it at all. I mean, the name implies that it should at least…”

“It’s the power of Chaos! Don’t let it break your mind!”

“T-Toughness? It has Toughness as a stat? But it’s a mediocre frock! It has passable lace cuffs, and is made from run of the mill taffeta! IT HAS VERY UNREMARKABLE RUFFLES AND RUCHING! Arrggghh my miiiiiiiiiinnnnnd!”

Such is the power of the Average Frock of Volition.

Next week on MMO Curio we examine a pair of Ok I Suppose Pantaloons of Vivification, which as the name suggests quite wrongly, provide a minor boost to the wearer’s Ballistic skill. 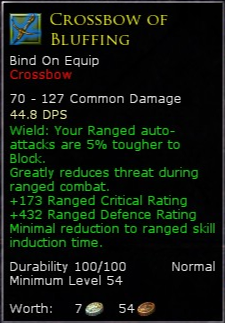 Welcome to the first in a new feature series of one, in all likelihood, knowing my propensity for starting features and then never doing another one. I keep stumbling across unintentionally curiously named objects in MMOs and thought I’d share them and maybe we can work out together what they really do.

Evidence the first I present to you on the right. The Crossbow of Bluffing, from my current sanctuary of solitude, Lord of the Rings Online.

But how does a Crossbow of Bluffing work in practice?

“Hand over the king’s daughter, vagrant, or you’ll get a bolt through the neck from my crossbow.”

“Arrrggg, you shot me in the groin!”

“I was only bluffing about the neck bit.”

“Curse you and your crossbow of bluffing! Here, take the king’s daughter and let me bleed out in humiliated peace.”

“Hand over the king’s daughter, vagrant, or you’ll get a bolt through the neck from my crossbow.”

“‘e’s bluffing lads, that’s not a crossbow it’s just a banana, ‘e thinks we can’t tell the difference in the dark!”

“Arrrggg! Run lads, ‘e was bluffing about the bluff, ‘e must ‘ave some sort of crossbow of bluffing or summat!”

Or perhaps its best use is in a more practical form of reverse psychology bluff?

“Hah, I knew you were bluffing on that last hand, you always bluff in poker! Where does your mighty crossbow of bluffing get you now, eh, clever man?”

Yes, on careful consideration, probably best to just use it as a crossbow and forget about the bluffing part.

Join us next time when we discuss the Sword of Dishwashing and the Unbalancing Staff of Walking.