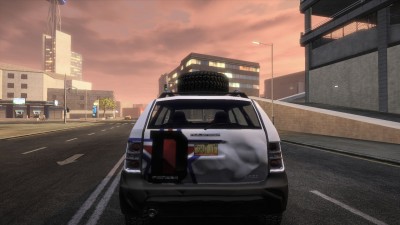 Little did we know that the license plate on The Department’s wagon would turn out to be strangely prophetic.

In the general case, people don’t complain that <insert competitive sport or board game of choice> is boring because it always involves playing the same scenario with the same rules over and over and over.

So why do a vast number of commentators feel that a PvP game such as All Points Bulletin having a repetitive mission structure is a design flaw?

APB certainly has its flaws, but this is not one of them. Could it be improved by adding new mission content? Obviously yes, but then football could be improved if they secretly added a minefield one week, maybe changed the ball for an angry wolverine the next; it doesn’t mean that football is fundamentally flawed when the organisers choose to leave the framework the same and let the players create the content instead.

DJ: “You’re listening to All Points Bulletin on 107.5 San Paro FM, headshotting you with explosive tunes twenty four seven! Traffic and Travel now, and we’ve got large queues backed-up on the I3, I7 and I8a. The I8b, I9 interchange, I12, and I14. The I15… pretty much all of the city really. Over to Tom in our Eye in the Sky for more details.”

Tom: “Thanks Bob. Well, since you started the report there have also been incidents on the I2 and I4 leaving them partially blocked, and at this very moment I can see four armed men have jumped out of a car on the I6, abandoning the car in the middle of the road and backing up the traffic there… and it’s just been rammed by a second car, which is now being machine gunned, and a security van has ploughed into the middle of everything, and someone’s got a rocket-propelled grenade laun-ARGHH, EVASIVE ACTION FRANK!”

DJ: “I’m sorry, we seem to have lost Tom there, some technical gremlins by the sound of it; hopefully we’ll be able to get back to him before too long. In the meantime, news just in: I’m getting reports of a helicopter crash on the I13 which is causing serious tailbacks. So that’s accidents on the I2, I3… on the I1, I2, I3, I4… Actually, here are the roads where there aren’t major incidents: I16. I’m… I’m just getting a report in that there’s a two car pile-up on the I16… a three car pile-up… three cars, and an ambulance trying to get to the wounded… nine cars, several ambulances, a fire truck, and an ice cream van being used as a mobile gun platform.

So that’s your traffic and travel news for this quiet balmy Monday lunchtime, we’ll have more travel in your area during the busy rush hour. Whoooof, looks like it’ll be slow going out there for a while folks, so here’s a little something to cheer-up all those of you trying to make your way across the city right now.”

I wonder whether PvP MMO games such as All Points Bulletin should adopt a gear system which is inverted to the norm for most MMOs, such that players start with powerful gear that degrades to a constant level, rather than having to work up to the level of gear of the early adopters by struggling against those same – now seemingly overpowered – early adopters.

It’s like have an Olympic race where you’ve trained yourself to be an excellent athlete at the four hundred metres event with times towards the low end of the forty second bracket, but when you turn up you find out that all the runners who competed last year now have bionic leg replacements that mean they can run it in the low thirties. The problem is that the only way to get bionic legs yourself is to win against the guys who already have them. So your competitive goal actually turns in to trying to convince one of the bionic competitors to give you a piggy back, and the whole race turns into some sort of perverse bionic Grand National with unenhanced jockeys riding around on the backs of whichever bionic big boy they can convince to carry them.

I just don’t think PvP is compatible with the traditional gear system of MMOs because game knowledge and skill is already a massive obstacle for the new player to overcome, layering on an additional artificial ‘gear gap’ makes for a game that will be inordinately intimidating to all but the most dedicated of masochists. This is why I think Counter Strike was (perhaps still is) the darling of the FPS online world for so long, because it used gear to allow players to specialise into different roles based on their personal preference or what the map demanded, without creating any sort of gap between the new and veteran players; yet if you visit a Counter Strike server as a new player you will know who the veteran players are quickly enough, because they will be the ones who understand the map and use its terrain to their advantage, but if you play carefully and craftily, you have every much a chance at killing them as they do you. This is why I think that adding gear levels to FPS games in order to keep players grinding away at them is such a massive mistake by gaming companies, because yes, you may well keep the early adopters invested in your game for longer, but once your game has been established for a week or two you essentially close the doors to a huge proportion of the potential new player population.

When you take these things into consideration, it quickly becomes clear just how good EVE Online’s skill training and ‘ship role’ systems are for allowing players to have disparate levels of ‘gear’ and yet still participate in PvP in a meaningful way.

Today’s post was brought to you by the phrase ‘Oh look, I’ve been two-shot by a magnum having emptied my entire automatic rifle clip into them without any discernible effect’, and the command ‘/quit’.