As is the way in this blogosphere of ours, a number of other blogs have already reported on the recently released initial details of StoryBricks, an RP storytelling game programming framework which is in development by the fine folks at Namaste, a company who ‘Just want to play’, something which probably makes developing a game somewhat difficult

“Actually, I just want to play.”

Nevertheless, Namaste’s MMO Wizard, Brian Green, and Cat Herder, Kelly Heckman, did manage to restrain themselves from playing for long enough to sit down with KiaSA and give us an introduction to the concept of StoryBricks, and show us the current prototypal realisation of Namaste’s ideas: ideas which they are demonstrating at Gen Con Indy right now!
— NOTE: Values of ‘right now’ may vary depending on when you’re reading this. If, for example, it is the year 2037, then they probably aren’t demonstrating StoryBricks ‘right now’, and this would probably be of little concern to you anyway, since you’re actually looking for a way to rid the Earth of its current overlords, the Xzibliks of Pangifran VII (Hint: Custard Cream allergy).

Perhaps the most important thing that we took away from the impromptu meeting did not actually concern the game or its concept –which is nevertheless exciting and interesting and packed with promise and potential– but instead revolved around the philosophy the company is taking in developing their game. Namaste have decided to take their newborn out to show the world. As with any doting parents, the concern is that others may see just another amorphous pink blob making some noise, but 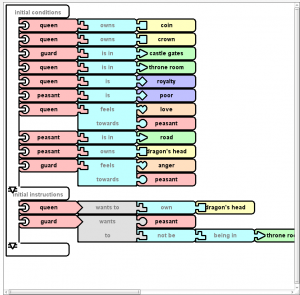 their overriding hope is that sensible people will look past the fresh, near-embryonic packaging, and instead see the potential contained within this little bundle, a bundle which will grow and adapt and strengthen over its years of development into something special. Now we’re not entirely known for being sensible here at KiaSA, and yet even we could see the potential in their current concept.

Namaste’s intention seems to favour feedback from their target market from day one, or as close to ‘day one’ as you can get without your presentation consisting of a pencil and a piece of paper with the words MAKING A GAME scribbled across the top. So if you’re reading this, and it’s not the year 2037 but slightly closer to 2011, you can go to Gen Con Indy this week and see for yourselves what Namaste is working on, just a few months into their development cycle. They’re garnering feedback from those people whom they hope will want to play with StoryBricks, a development concept which seems alien in the world of game making. I mean, where are the secrets? The exclusives? The ‘Could We Just?’s and the ‘Ooo, Sorry We Can’t Yet!’s? Where’s the dangling of screenshots of half a tree next to a house, with the implication that ‘This could be somewhere exciting in the game!’ but with caveat that ‘It probably isn’t’. Instead what we have is, well… what we have. It’s the current development build as they work through their core ideas, which they then bring to you, the players, and ask ‘Is this what you would want? How could we make it better for you?’

Don’t misunderstand: they have solid plans, ideas and goals, this is not a fishing expedition with dynamite, they are simply testing the waters and seeing which bait is most likely to get players to bite, metaphorically speaking, of course (KiaSA has never been to Gen Con, but we hear that some of those free-form RPG sessions can get pretty heated).

Who is this target market of players that they are currently reaching out to? Well, initially it seems it’s the storytelling RPG demographic, the White Wolf and Dungeons & Dragons crowd; it’s those people who currently build interactive stories with pens and paper, who might like to have an intuitive and fun way to build their stories within a 3D virtual space, where NPC AI reacts to the players based on a framework or back-story that has been planned and implemented by the story’s creator using StoryBricks.

But what is StoryBricks? In its current form –and remember that everything is in very 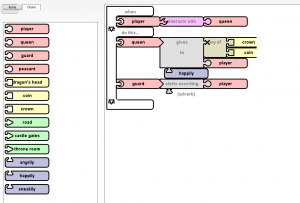 early development: a state of flux that rivals primordial oceans, but with similar prospects for creating exciting new things– StoryBricks is a system which allows gamers to program their own stories. It’s clear that this newborn has indirectly inherited from a lineage that includes systems such as MIT’s Scratch and, more loosely, Lego Mindstorms, the latter of which certain sprang to mind because one half of KiaSA has recently been working on a project that uses National Instruments’ LabView. These graphical systems are different concepts from what a text-based coder is used to, but ‘algorithms is algorithms’ as Oscar Wilde once said to Ada Lovelace as they successfully fought off another wave of Neptunian Robomatons (we really must get around to writing that story), and visual programming systems such as these are great enablers for non-coders to, quite literally, plug and play their way into programming. The story programming is linked to objects and NPCs in a 3D game world, which operates much like your standard RPG, except NPC AI is determined by the rules programmed into the story framework. You play Neverwinter Nights, say, but the NPCs’ AI reacts to the players, and indeed other NPCs, based on their StoryBrick programming, such that emergent game-play is a real possibility.

Here’s an example based on our impression of the game from the demonstration. Consider a thief at an inn who has an object which the players need for their quest. In most MMOs the players would simply stab the thief, loot the item, perhaps have to wait for the thief to respawn another seven times so each member of the party could stab him and loot the item, before handing it in for some XP. In StoryBricks the… Brickmaster? may well have programmed the local guard to be ‘wary’ of the players, such that as they approach the thief the AI determines that the guard will watch the players and intercept them if they attack. The players will witness the guards distrust through emotes. The players may discover, however, that the bartender of the inn is ‘resentful towards’ the thief (perhaps the thief has a large tab he hasn’t settled; such back-story would be available to the players as per the Brickmaster’s story framework) and that with a little persuasion and passing of coin, they can get the bartender to ‘place sedative’ into the thief’s next drink. With the thief unconscious, the player’s could pickpocket the thief without rousing the guard’s suspicions.

Parallels can clearly be drawn with other systems for player created content, such as Second Life, LittleBigPlanet and City of Heroes’ Mission Architect, but where those games concentrate on giving players options to build objects, levels and missions, StoryBricks is aimed at allowing the players to build a story, creating something more akin to a Dungeons & Dragons module for players to experience, where the work of the GM in running NPCs is subsumed into the module framework itself.

It’s certainly an ambitious and interesting concept, and one that should be easy and exciting to follow in the coming months if Namaste’s current honest and open development style continues. KiaSA will definitely be keen to give feedback whenever possible, starting with our current observation that although StoryBricks such as ‘likes’, ‘hates’, ‘owns’ and ‘gives’ are all well and good, there’s certainly a market for more KiaSAble StoryBricks, such as ‘splungthrust’, ‘sternly clenched’, ‘panicked squassation’ and ‘ejected sardanapalian spumescene resulting from cheeseboard indecision’. On second thoughts those might be a bit too specific for general use, perhaps we could license the option for a future expansion pack.