OK, I couldn’t resist, that’s a copper bottomed golden meme (with zinc plating and strontium edging) that Melmoth turned up, so I give you:

I’d rename my Guitar Hero band right now, if only the new one fitted into the character limit…

I’m in a bit of a memey mood at the moment – that’s a mood for memes, not a mood for “Me! Me!”, which is a given – and I saw this fun one over on Greenspeak which I couldn’t resist trying.

Head on over to Greenspeak to find out how, and leave a link in the comments here if you decide to give it a go yourself, I’m excited to see other efforts.

Shine on, you crazy diamonds.

How do I explain it? Well, I’ve tried to put it into words before, and here we have a perfect example. Zoso takes the meme tag and follows through with a 10.0, perfect score, meme response. It’s all there: the image, the explanation and the follow on links. Whereas I can’t possibly pick just one picture from a folder, I’m all over the place, drowning under a stream of images that would make Flikr baulk. So what with Zoso responding to the meme in the correct manner that blogiquette necessitates, I’ve decided to do a slightly different take and have selected six of my sixth images from various MMO screenshot folders.

1: Hellgate London. A rare shot of this mob before he was renamed Big Boned Illegitimate Son. Hellgate wasn’t a bad game at all, it just suffered from a similar problem to City of Heroes in that its attempts to randomly generate missions made for bland and repetitive game play, because there’s obviously a limit to how unique you can make a mission when you’re trying to generate it from a limited set of external parameters. A shame, because the combat was quite fun. Well, the guns were fun, the magic was rubbish.

3: City of Heroes. There had to be a City of * screenshot in this selection, because it’s a game that has taken so much of my time and money. No matter what MMOs I go off to play, this and World of Warcraft are the two games that I always come crawling back to once I’ve been jilted by the sassy adventurous MMO in the tight leather trousers who only ever intended to toy with my attentions. As a complement to Zoso’s picture, here’s his Fire/Fire Blaster still going strong in the mid-thirties alongside my five hundredth alt, a Fire/Fire Tanker called War Stove. War Stove was the highest level hero I’ve ever had, I say ‘was’ because I re-rolled him in a fit of.. stupidity, quite frankly, and then never got him past level 10. Ask Zoso about it some time, he’ll tell you all about what he has to put up with from me and my altitus.

4: Age of Conan. Now here’s a game I really wanted to love. I liked the setting, the character design, the classes, and those first twenty levels in Tortage were so good I did them several times on different characters to get the various different stories that were available depending on your class. I also did them twice on the same character, because I had to re-roll him due to a poor beard and hair colour choice, but let’s not go there, eh? In the screenshot is the first version of the Bear Shaman I played, the class that still appeals to me on every level: melee combat, healing and buffing, along with bestial shamanistic tendencies. What’s not to like? The only disappointment was the fact that he couldn’t actually turn into a bear, but I can live without the simulated furry sex. I whacked the body size slider all the way to ‘fat’ because I felt that a follower of the Bear was not going to be a scrawny wiry little fellow, hence his slightly overhanging bare belly, or bear belly if you will. He’s still more ripped than Arnold Schwarzenegger though. Welcome to the world of Hyboria, where steroidal stereotypes rule.

5: Dark Age of Camelot. Another AoC, only this one is slightly darker. DAoC was the first MMO I ever played, so there’s some strong nostalgic mojo with this one. After many times seeing the Everquest boxes on the shelves in my local game store and almost purchasing a copy, I finally caved-in and bought DAoC when I saw the playable races available. This game still has the best selection of race design to my mind, and the hulking stone trolls will always be my favourite race in an MMO, at least until Blizzard finally relent and implement the Pandaren as a playable race. I wish I could tell you more about this character, but as well as being my first MMO, DAoC was also where I got my first taste of chronic altitus. I had a Troll Thane, which I think is what Hob is there in the screenshot, then a Troll Shaman, then a Thane again. Then I went and played just about every class on the Hibernian side. Came back to Midgard, played another Troll, and a Kobold. And on and on. The only race I couldn’t play in this game were the dwarves, they were just… creepy looking, as though they spent all their time hiding in your bathroom cabinet just so they could watch you pee.

6: Lord of the Rings Online. Last but by no means least, we have a game that I should still be playing today, but for some reason it just doesn’t press my MMO buttons despite several attempts to get into it. Here you can see my first character, a Dwarf Champion, who is smoking a pipe while Zoso’s character tries to look serene and resplendent in a rather fine hat while blinking smoke out of their eyes. I think I rolled a Minstrel about five minutes after this screenshot was taken. It went downhill from there.

If anyone wasn’t tagged in Zoso’s meme post and would rather like to have been, please feel free to tag yourself in the comments here and I’ll add a link to you just below in this post. It’s quite fun to look back and reminisce over old screenshots, and it makes me glad that I’m a habitual screenshot snapper.

And lo did the sixth screenshot meme sweep the blag-u-spore, like… a meme, sweeping… a lot of blogs. And verily were we tagged, and it’s been a while since the last meme-ing, so for your delectation…

Ah. This has uncovered something of a problem. Firstly, I’ve hardly taken any screenshots in recent games, something I really ought to do. Even if it’s just of hats. Secondly, I’m sure I had a bunch of older screenshots, but with most MMOG data being held on servers I don’t tend to think of saving install folders, so between various PC moves, upgrades etc., I fear I’ve lost a lot, which is slightly depressing. Oh well. Fortunately, in a corner of “My Pictures”, I found a folder labelled “CoH” of a few cleaned up screenshots I had saved, so while not quite an actual screenshot folder, I give you the sixth file therefrom… 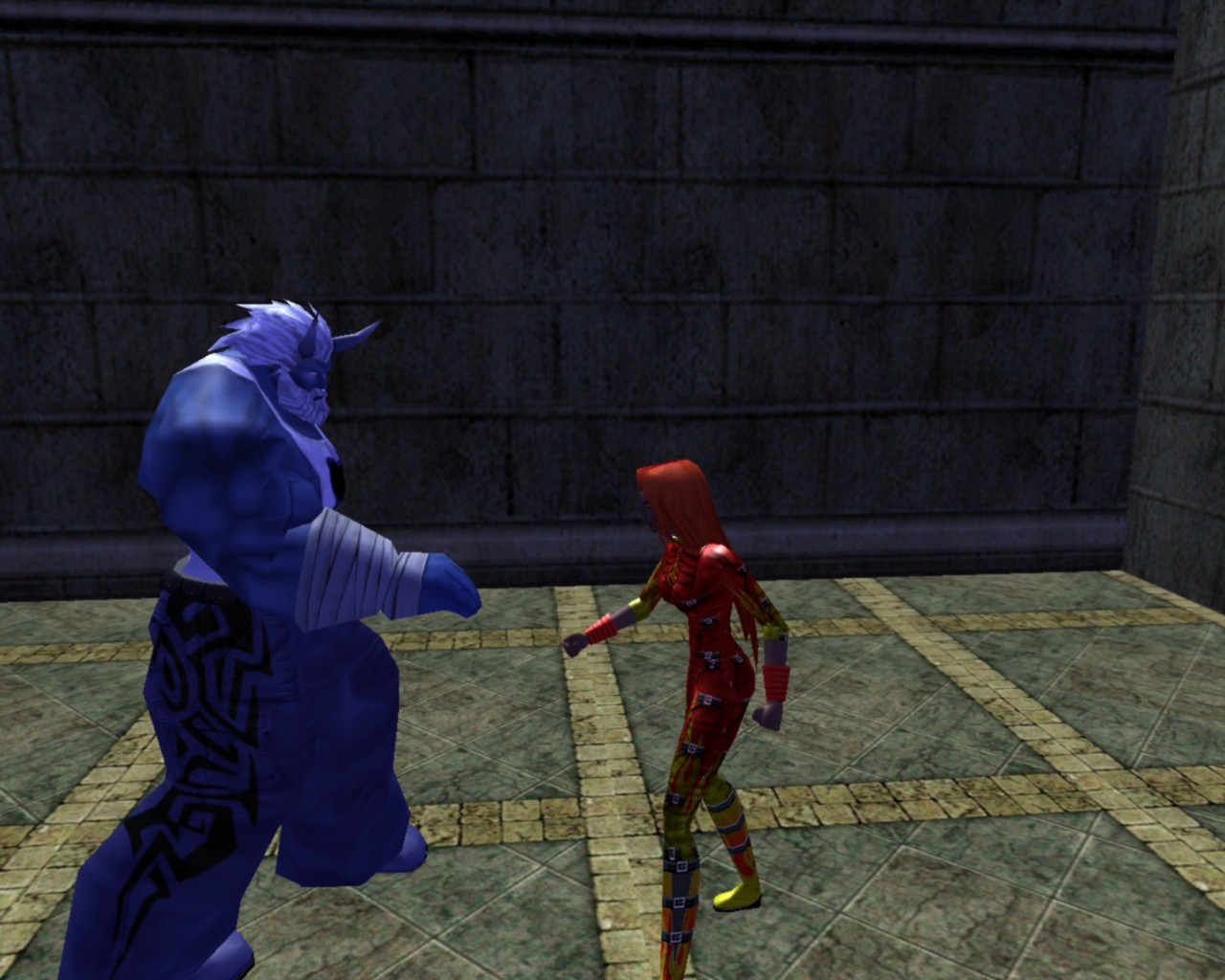 My third or fourth City of Heroes character (right), a fire blaster, who I got to level 50 and still play, and one of Melmoth’s early characters (left), a scrapper of some kind.

Speaking of Melmoth, I believe he’ll be along in short order, the combination of the meme and his recent post on nostalgia may have sent him into something of a nostalgic screenshot frenzy. In the meantime, as a joint tagging of other blogs (six is quite enough, to tag six each would just be crazy insane, got no brain), lo do we say unto these people, “go forth and post the sixth screenshot from a folder, yo”: PJH, Welsh Troll, MBP, Aaron at Snark and Fury (opening up the floor to game screenshots, TV screencaps or comic screen… comics), and Van Hemlock and Jon (for textual descriptions of a screenshot each in the next Van Hemlock podcast, that should make pretty compelling listening).