Say one thing for Gaijin and Wargaming, say they put some effort into April 1st. Fire up the Captain Pugwash theme, put on an eye patch and adopt a strong West Country accent, because War Thunder is sending you out to do a bit of privateering in the Golden Hind:

Port to sherry, and a medium-dry sherry to port!

The ship looks fantastic (as does everything in War Thunder). Combat is a bit tricky, requiring you to account for the roll of the ship when delivering broadsides (trickier than Pirates of the Burning Sea, as far as I can remember, it’s been a while…) You don’t want to stray outside the playing area either:

The ultimate goal is for War Thunder to feature naval combat alongside its planes and tanks, but there’s been very little information about how it might work. I have to say I preferred last year’s magnificent WWII Walkers, but this event could be a cunning way of doing a bit of testing of some elements of aquatic combat, and of course presents the ideal opportunity to break out some more Excellent Pirate Jokes:

Q: What aeroplane do pirates fly?
A: A HawkARRRRRR! Hurricane

Q: What part of the Hurricane do pirates like the best?
A: The wing spARRRRRRRRR!

Q: Where do pirates conveniently shop?
A: At SPARRRRRRRRRRRRR!

Q: Does ‘spar’ have any other meanings?
A: Yes, but I’m bored now. Aren’t you bored?

Q: I was bored after the first one.
A: Right. Well I’m going to get a cup of coffee.

Wargaming completed their triumvirate of Worlds Of… with World of Warships last year, good fun, but I rather burnt out on it a while back. I did have to get it patched up, though, for the excellent Cap and Goldfish:

He can breathe under water because he has amphibious nostrils

And their bathtub battles: 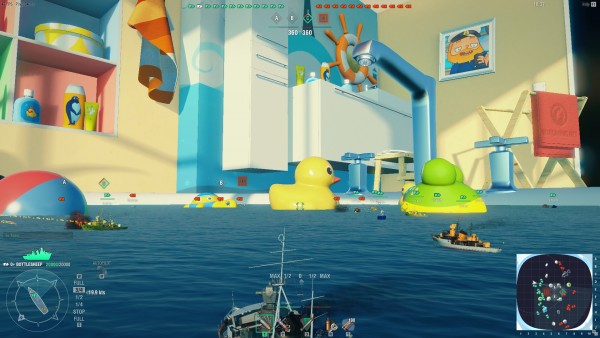 Splish splash, I was taking a bath