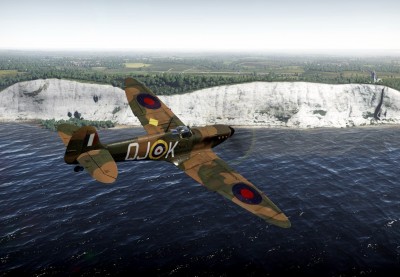 My personal highlight of the Chalke Valley History Festival was seeing Squadron Leader Geoffrey Wellum DFC in conversation with James Holland. The two first met when Holland was writing a book about the Battle of Britain and seeking pilots to interview; Wellum had jotted some memoirs in the 1970s, not particularly intended for publication, and after the interview offered a chapter he thought might be of interest. Recognising the quality of the writing it didn’t take long for a book deal to be offered from Penguin, and First Light was published in 2002. It’s a terrific book that starts with Wellum, aged seventeen and a half, attending an RAF selection board in March 1939; fourteen months later he’s posted to 92 Squadron with 168 hours of flying under his belt (95 solo), never having seen a Spitfire, let alone flown one. The next day the squadron is in combat over Dunkirk and loses several pilots, including the commanding officer.

There’s a brief respite after Dunkirk as the squadron moves to Wales, at least allowing some time to get familiar with the Spitfire, before they move to Biggin Hill in September 1940, right at the heart of the Battle of Britain. Wellum’s description of his first combat mission is particularly gripping, with the squadron thrown into a raid of more than 150 German aircraft; a head-on pass through the bombers, picking off a straggler, a probable kill but focused too hard on the target, bounced by an enemy fighter, desperate manoeuvring to escape, finally home, damaged but alive. As the Battle of Britain winds down at the end of 1940 the squadron move on to offensive operations over France in 1941, until eventually a posting to an Operational Training Unit to pass on hard-won skills to new pilots brings some respite, but also a sense of despair, being past it, a “worn-out bloody fighter pilot at twenty years of age”.

Wellum returns to operations in early 1942, first with 65 Squadron flying over France again, then finds himself on the aircraft carrier HMS Furious. Malta has been under siege since 1940 and is critically short of supplies; fuel, ammunition, aircraft, food, beer! Operation Pedestal is a an effort to resupply the island, a convoy of fourteen merchant ships with a formidable escort including two battleships and three aircraft carriers; Furious will fly off land-based Spitfires to reinforce the Malta squadrons. Nerves aren’t helped as another carrier, HMS Eagle, is torpedoed as the Spitfires are taking off, but the flight make it to Malta safely. Over the next few days the convoy is hammered by German and Italian aircraft, torpedo boats and submarines; four battered merchant ships make it through, and, barely, the tanker Ohio, just enough to sustain the island.

Wellum himself is also in a poor state, suffering severe headaches while flying; an X-ray reveals fluid around the eyes, chronic sinusitis. A rather unpleasant business with what looks like a long sharp knitting needle resolves the immediate issue, but a subsequent check-up reveals he is “absolutely played out mentally and physically, no reserves left”. The book ends with an epilogue, Wellum passed fit to fly again, on secondment to the Gloster Aircraft Company and about to climb in to a Typhoon as a production test pilot.

Reading an overview of the Battle of Britain it’s easy to be swept along in statistics, sorties flown, victories, losses, tons of bombs dropped; First Light is deeply personal, taking you right into the cockpit of the Spitfire, giving a brief glimpse of how life was. The BBC made a film of it in 2010 for the 70th anniversary of the battle, I missed it at the time but must get around to picking up the DVD. The book is certainly well worth a read, and I was keen to get a chance to see the author in person.

At Chalke Valley, the tent is packed for the talk. At 92, Wellum is still sharp and clear, a very engaging speaker, self-effacing and funny; there is a lot of laughter throughout the event, often prompted by wonderfully British understatement. Holland starts with a quick overview of how First Light came about, with the effort to find Wellum to offer him the publication deal ending with him being tracked down by a phone call to the local pub! A quick run-through of initial training, and a question on how pilots were selected for fighters, bombers or other aircraft: “They probably thought I was too irresponsible to have a crew, if I was going to kill anyone I could kill myself, not take a crew with me!”

Moving on to 1940, and being posted to 92 Squadron, Holland asks about the Commanding Officer at the time, Roger Bushell; Wellum relates how Bushell was shot down over France the day after he arrived and taken prisoner, later to organise the “Great Escape” from Stalag Luft III only to be murdered by the Gestapo after being recaptured. 70 years on, there is still clear and understandable anger.

Happier memories, first flight in a Spitfire; characteristic humour after a run-through of the controls, the instructor about to jump down off the wing: “Don’t go anywhere for a minute… how do you start it?” A sense of immense power after the Harvard trainer, “hanging on for grim death!” Wellum’s account of his first encounter with the Luftwaffe is even more compelling first-hand, emerging from cloud to confront 150 enemy aircraft, feeling it was “a bloody stupid place to be”! There’s a brief discussion of tactics, the RAF still using the tight Vic formation, not adopting the more effective “finger four” (nothing rude, a formation where, if you lay your hand flat, each plane is positioned on the tip of a finger) until after the Battle of Britain; Wellum points out that the Luftwaffe had rather a head start from the Spanish Civil War, giving them the opportunity to develop the Messerschmitt 109 both technically and tactically in actual combat even before the first production flight of the Hawker Hurricane. Apologising for stepping on his soapbox for a moment he was emphatic that we won the Battle of Britain, it wasn’t a draw, it was the first time the Germans had been stopped, prompting a hearty round of applause; I’m not sure if that was in response to anyone in particular, there was a fine BBC programme recently about Eric “Winkle” Brown (who was at last year’s Chalke Valley festival), in which he talked about interviewing Göring who declared the battle a draw, oddly enough.

92 Squadron had something of a wild reputation around Biggin Hill, not something dwelt on in the book; Holland briefly hints toward it:
JH: “And after a day’s flying, perhaps you’d go to the White Hart?”
GW: “Yes”
JH: “After every day’s flying?”
GW: “Yes”
JH: “Perhaps drink a little too much?”
GW: “Yes. This is easy, isn’t it?”
*laughter*

It’s impossible to imagine the strain, flying multiple sorties a day, losing friends and colleagues on an almost daily basis, no great need to dig too deeply into what it took to get through a time like that; with a brief allusion to some interesting sounding “parties”, they decide they ought to move on…

Reaching 1942 and the operation to Malta, Wellum recalls going to check over his plane in the hanger to find an armourer unloading the ammunition from his guns.
“What’s all this about, then?”
“Cigarettes, sir”
“Cigarettes?”
“Yes sir, they’re awfully short on the island, so we’re going to fill the ammunition boxes with cigarettes.”
Thankfully there aren’t any enemy aircraft as they come in to land, as they couldn’t have done anything about them anyway!

There’s a nice long opportunity for questions and answers at the end of the session. Some questions can be a little disjointed or rambling; “What’s the précis of that, James?” Fortunately Holland is a dab hand at paraphrasing, every query yields further interesting answers. Someone asks how he used his experience when he became an instructor at an Operational Training Unit, he explains that the training programme at the time was fine for teaching students to fly, but not to fight; he’d had no combat training before being posted to his squadron, never fired his guns, hadn’t been taught how to properly use the reflector sight, so he tried to teach his pupils to use their aeroplane as a weapon. Asked if he’d had a chance to fly a Spitfire since the war he replies that indeed he had, a few years ago in a two-seater; once up in the air the pilot in the front seat asked if he’d like to take control, he answered in the affirmative. “Are you sure?” said the pilot. “Oh yes” replied Wellum; “are you sure?” After all the years, he said it was like he’d never been away; testament, I think, to both the man and the machine. Had he met any German pilots after the war? Yes, a few; he didn’t seem too keen on Adolf Galland, but talked more warmly about Gunther Rall. A lady in the crowd says that her father desperately wanted to be a fighter pilot but his work on aero engines at Rolls-Royce was deemed essential and he wasn’t allowed to join the RAF; Wellum is thankful, as the Merlin engine never let him down, no matter how much he thrashed it in combat, a tribute to the Rolls-Royce team.

On the differences between flying in Malta and England, Malta was tougher; the heavy bombing, the heat, and the lack of supplies (more difficult to get hold of beer!) Someone asks if it’s not true that the Luftwaffe found that best way to attack bombers wasn’t from above and behind, but from underneath; “I wouldn’t know about that, I wasn’t a German and I wasn’t shooting at Lancasters!” His technique was more just to “get in and at ’em”. There’s a question about ammunition; after unsuccessful trials with 19 Squadron during the Battle of Britain, 92 Squadron received cannon-armed Spitfires just after the battle, and resolved most of the issues by rotating the cannon mounting, the additional power of the cannon was appreciated, though the early versions only carried 60 rounds per gun. Asked about differences between Spitfires, Wellum said he hadn’t flown any of the Griffon-engined variants, his favourite was probably the Mark XVI, with cut-down fuselage and clipped wings; he was fond of the Mark VB, but it was a little outclassed at times.

I would’ve liked to ask about his time testing Typhoons, or the rest of his RAF career (he stayed in the service until 1961), I’ve been able to find very little about that; perhaps it just doesn’t compare to 1940. Time flies by and I don’t get the chance, many hands are still raised but things have to be wrapped up to give a quick chance for signing books before getting out to see the flying display from a P-51 Mustang. A thunderous standing ovation, and we file out into the warm Wiltshire sun. Wonderful. 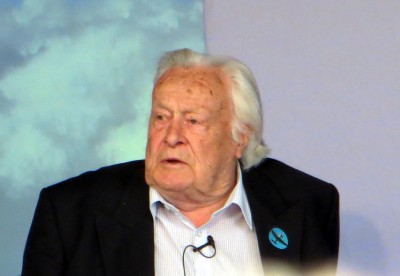