Chalke Valley History Festival is, as could be surmised from the name, a week-long history festival held on a farm in Wiltshire’s Chalke Valley, combining historical talks and presentations with living history encampments spanning the centuries from Anglo-Saxons to World War II. We’d thoroughly enjoyed the event last year, after finding out about it the day before, and with sufficient forewarning booked tickets in advance for a couple of talks this year.

Wandering around the site we happened across a column of Vikings and Anglo-Saxons waiting for troops of the American Revolutionary War to clear the arena (a noteworthy occurrence anywhere else, just another day at Chalke Valley), and needing to make a bit more room for a gun carriage they started shuffling backwards. One wag at the front called out “Beep! Beep! Beep!”, and soon the whole lot were beeping along to the cry of “Attention! These Vikings are reversing!” Once in the arena, they set about each other with sword and axe: 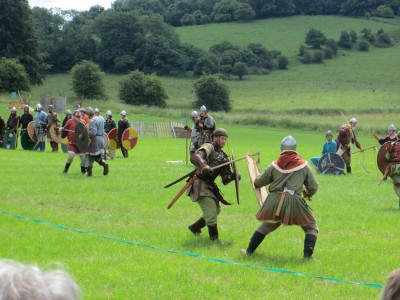 The day was punctuated with fly-pasts from classic warbirds. Unfortunately the scheduled Spitfire PR XIX was unable to fly, but an extra display from a P-51 Mustang from the Hanger 11 collection wasn’t a bad replacement: 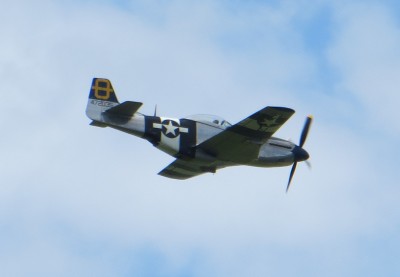 Hurricane R4118 has had a rather tough life, being shot down during the Battle of Britain, suffering a few prangs when used in Operational Training Units, then used for engineering instruction in India. Painstaking restoration work has brought her back to flying condition with impressive results: 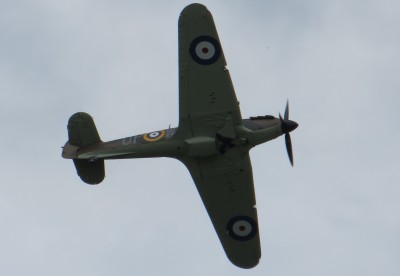 Last but by no means least, Sally B, the only flying B-17 in the UK (don’t worry, the smoke is part of the display): 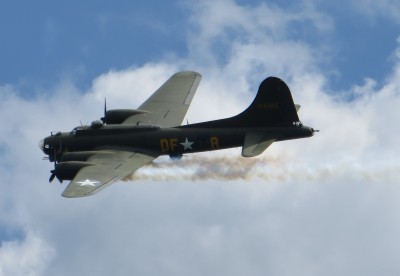 Giving impressive displays throughout the day were Destrier, demonstrating the skills and armour of medieval knights. In the morning, skill at arms: male and female riders dishing out violence to unfortunate fruit and veg, setting about cabbages and apples with sword, axe and warhammer, quite a sight as they thundered past at speed. They also picked up rings with light lances, flung javelins at targets and a straw-stuffed Yorkist (bonus points for an amusing kill), and hunted boar from horseback (just a dummy, no animals were harmed during the making of this festival). 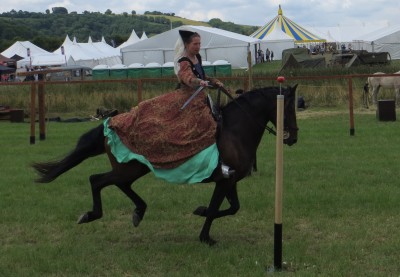 How To Defend Yourself Against Fresh Fruit

A second presentation showcasing armour of the period in fascinating detail built up to the grand finale, jousting. No script or hokey story, just the spectacle of fully armoured riders thundering towards each other, quite amazing. 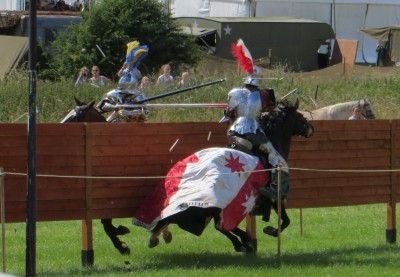 It’s Only A Flesh Wound

Thing didn’t quite finish according to plan with dented armour, trouble with a caparison and a skittish replacement horse conspiring to prevent the final rounds to determine the grand champion, but the eloquent and witty master of ceremonies managed to hold everything together despite the unprecedented setbacks. Dispersing, we followed a German mortar platoon, who set themselves up for a Normandy ambush in the main area, which looked set to be quite a spectacle, though we had to head off before it got underway. 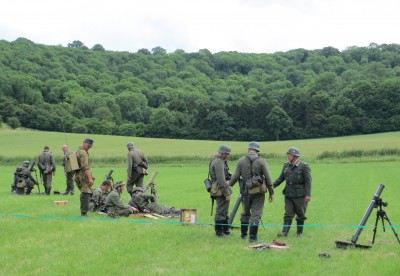 Unquestionably, though, the highlight of the day was a talk from Geoffrey Wellum, a Battle of Britain Spitfire pilot, which deserves a post of its own that should be coming soon!