I haven’t played World of Tanks for a while, but with the start of the four-yearly Cue To Start A Comment Thread War Over The Preferred Shortened Form Of ‘Association Football’ (known as the ‘World Cup’ in some circles), Wargaming have added a fun little event… 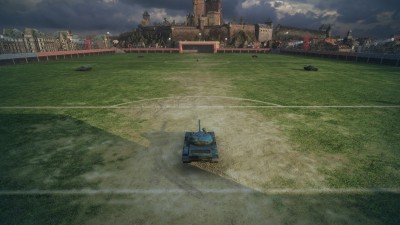 Translating foot-to-ball into the rather more exciting armoured warfare variant “tank-to-ball”, all WoT players have been given a special T-62 Sport. Entering battle with this vehicle, two teams of three face off against each other, attempting to push or shoot the giant tank-ball into a goal. Tanks can’t be destroyed, but hitting an opponent’s tracks will briefly disable them:

Delicate touches are tricky to pull off with 39 long tons of steel plated fury, so matches can bog down into a bit of an Eton wall game-esque stalemate:

Ball control via cannon fire appears to be the key skill for tank-ball, being responsible for most of the goals I’ve seen so far. Just be prepared if your team does score, the ball respawns on halfway almost immediately so some frantic defensive realignment may be required.

I’ll wager that you’re mightily impressed by the in-depth football knowledge I’ve displayed in the captions of the screenshots, but I’ll let you into a little secret… I didn’t really know very much until I read this excellent guide. If you’re going to try a few rounds of tank-to-ball, you should try and remember a few phrases and use them in chat – lets get this event started, i am enjoying myself!